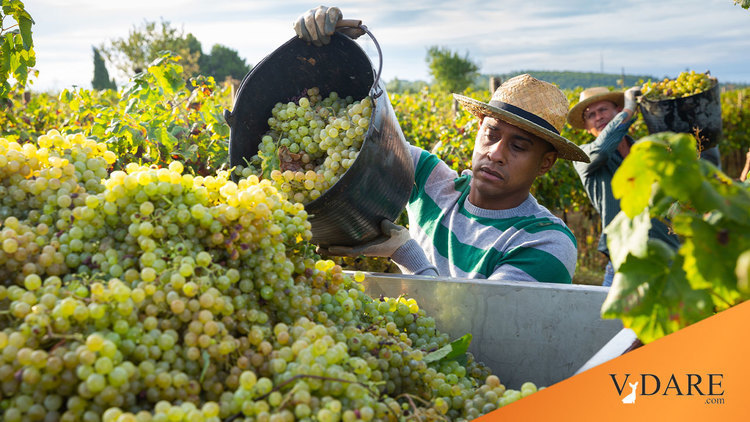 The Proof Is In The…Raisins?

One of the amusements in the immigration reform game is to watch the protestations from the other side.

Now that our opponents are decisively on the defensive, their arguments for more immigration grow increasingly less persuasive…even, I'll bet, to themselves.

Of course, it helps that immigration reformers know the score and can't be fooled.

Having the facts burned into our minds helps plenty.

For example in today's case, the subject is raisins and agricultural workers—two topics on which I am well versed.

Los Angeles Times columnist Michael Hiltzik—yes, none other than the winner of the "VDARE.COM Second Annual Worst Immigration Coverage" award and one of my subjects last week!—tried to pass off his September 22 piece, Border Policy is Pinching Farmers, as an insightful look at how the farming industry will fall to pieces unless more ag workers are immediately given visas to come to the U.S.

"…A severe shortage of farm workers has placed a $29-billion industry at risk.  Raisin growers in the Central Valley were 40,000 workers short of the 50,600 needed for the annual harvest that began in mid-August, according to Manuel Cunha, president of the Fresno-based Nisei Farmers League.

"As a result, he says, half the crop was still on the vines Tuesday. After that day, unharvested fruit would not be covered by federal insurance if spoiled by rain. The rains came Wednesday. Cunha says crop losses could reach $300 million."

Harvesting raisins is one of the toughest jobs in agriculture—no question about it.

But if indeed there is a shortage of laborers—not at all proven by Hiltzik in his column—should the first cry from always be for more imported workers?

My answer is no.

Here are four questions I'd like answered before we open the floodgates again with another guest worker program.

Hiltzik quotes the Nisei Farmers League's claim that 40,000 of 2004's 50,600 pickers have vanished. But have they? Some probably latched onto better jobs in construction. A handful may have returned to Mexico. But the vast majority have not strayed very far, believe me! Priority number one is to find them.

To reinforce his point, Hiltzik quoted Marc Grossman, a spokesman for the United Farm Workers, who said:

"This is a disaster of the growers' own making. Despite the dearth of laborers, pay in the fields hasn't improved much in recent years. Many workers collect scarcely more than minimum wage for brutal, backbreaking toil."

That could be the understatement of the century. According to Migration News,

Even the growers concede that their pay scale is not competitive with other job options available to illegal aliens. Hiltzik pointed specifically to construction jobs that offer $9.00-$12.00 an hour. (Why isn't Hiltzik screaming about the long-gone American construction worker done in by that paltry wage offered to and accepted only by illegal aliens?)

The UFW has consistently argued that there is no labor shortage. According to it, the farmers want more guest worker programs so that they can continue to pay rock bottom wages.

As an avid home baker and ice cream maker, I am an above-average consumer of raisins. For fifteen years, I have been buying all types and varieties at the Lodi Farmers Market for $3.00 per pound.

No serious shortage is anticipated this year, according to my sources.

Furthermore, I would be happy to pay more for raisins if it meant a job for an American.

VDARE.COM has repeatedly made the case that U.S. workers can fill any job if they are paid a fair salary. Americans will not, however, haul raisins for $ 0.20 cents a tray.

But the point that we do not need guest workers to harvest raisins is secondary to the fact that Hiltzik, our bitter foe, recognizes our point perfectly. In fact, he acknowledges that wages are key to the worker shortage.

But instead of following up on that critical aspect of the argument, he drops it to take up the cause of the proposed Kennedy-McCain guest worker/amnesty legislation.

What Hiltzik is guilty of the immigration enthusiasts' characteristic flaw: intellectual dishonesty.

What then, do you suppose Hiltzik proposes we should do with those guest workers if they came to California only to encounter a week of rain?

The crops would be ruined while the workers take off to the public trough.

Hiltzik knows we're right; he admits as much in his column. Remember Hiltzik's own words …"low pay and harsh conditions."

But Hiltzik can't quite bring himself to explain his true feelings: that he prefers to see America made over into Mexico rather than pay living wages to U.S. workers. [Ask him why]

That is clearly the attitude of his employer—"La Times," as it is known among the few remaining English speakers in Los Angeles.

The bad news for the LA Times and Hiltzik: the newspaper's few remaining readers are smarter than they are.

That's why, as reported last week, the LA Times' circulation is in free fall.

And it is also why the paper will continue to lose readers with every passing week.