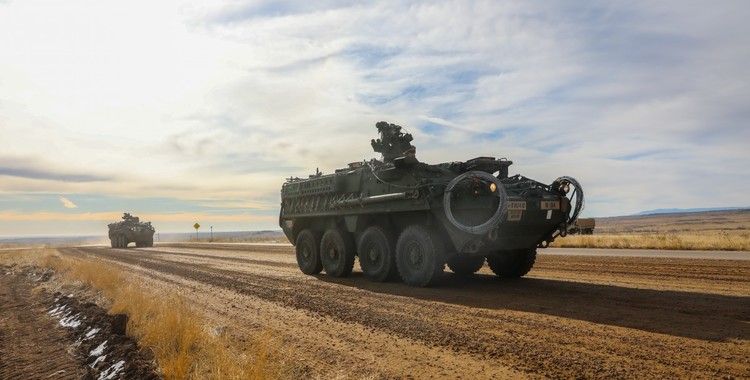 The "Peace" Brigade vs. the Stryker Brigade

Last week, I wrote about the Gathering of Eagles (www.gatheringofeagles.org)—veterans, active-duty troops, bikers, activists and ordinary citizens coming to Washington, D.C., on March 17 to hold a counter-protest against tens of thousands of anti-war extremists demanding immediate withdrawal of our troops from Iraq and Afghanistan.

In Washington State this week, the peace brigade held a dress rehearsal at the Port of Tacoma—where they showed support for our troops by taunting the Stryker Brigade and local police guarding against obstruction of the convoys headed to Iraq. More than 300 Stryker vehicles and other equipment are being moved from Fort Lewis to Iraq in support of the 4th Brigade, 2nd Infantry Division's upcoming deployment as part of the ongoing "surge" and counterinsurgency efforts. The Strykers are equipped with slat armor to protect the troops from rocket-propelled grenades.

Yes, the same ilk that purport to care so much about the troops not having enough armor and protection stood and jeered at those deploying to bring more protection to their fellow soldiers in Iraq.

Members of the anti-military mob shouted condescendingly at our volunteer soldiers rolling past them: "Free the troops!" "No justice, no peace!" "You don't have to go!" One lunatic with a bullhorn urged Stryker Brigade members to disobey their commanding officers and sneered: "Your sergeant is a douchebag!"

These same bullies staged obstructionist protests at the Port of Olympia in Washington last year—blocking gates to prevent convoys from passing and attempting to tear down fencing following the arrival of a large military ship bound for Iraq. In April 2003, "peace" protesters waged similar attacks in Oakland, Calif., where they attempted to shut down a port involved in shipping military supplies to soldiers. The Bay Area anti-war brigade set out deliberately and specifically to prevent private businesses from fulfilling their federal contracts with the Department of Defense and U.S. Agency for International Development related to the war and post-war reconstruction in Iraq.

A mother of one of the Tacoma soldiers who rode silently past the spittle-spewers wrote to me earlier this week after seeing anti-war video of the mob scene uploaded on YouTube:

"My son was one of the Stryker soldiers who was moving the equipment to the port that night.

"These people are protesting the shipment of Strykers. Strykers are what keep our infantrymen alive in Iraq. They are agile, strong, and the newest ones have very accurate firepower. Once again, the moonbats say they support our troops, but not the war. They show it by insulting the troops' intelligence, calling their NCOs names, and telling them that they will die for nothing. Nice. I personally like to tell my son that he will come home alive and we will be reunited. These protesters sounded more like spoiled, self-centered, obnoxious brats to me. Yet, at the end of the line, there stand our troops. They are carrying the weight of the free world on their shoulders and they get to hear this mindless drivel before they deploy."

"The last big protest was at the Port of Olympia last year. The moonbats did damage to a fence around a yard that protects military equipment. The Strykers they were protesting that day were Strykers that were equipped with medical intervention equipment. The protesters were marching against medical supplies that our soldiers need desperately, and once again the very equipment that keeps our soldiers alive. It seems that there are two populations of people who hate Strykers: moonbats and insurgents."

Question their patriotism? You bet I do.