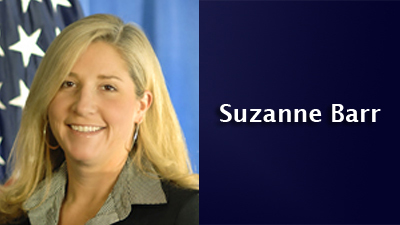 The ICE Lesbian Scandal, Democratic Women, And The Culture Of Corruption

Hey, remember when Nancy Pelosi and a gaggle of Democratic women vowed to eradicate Washington's culture of corruption? Tee-hee. Instead of breaking up the Good Ol' Boys Club, Capitol Hill's leading liberal ladies have established their very own taxpayer-funded Sisterhood of the Plundering Hacks.

This week, the names of two of Department of Homeland Security Secretary Janet Napolitano's gal pals surfaced in a mortifying, Animal House-style scandal. If the allegations of whistleblowers pan out, DHS may soon be known as DSH: The Department of Sexual Harassment.

According to FoxNews.com's Judson Berger, DHS chief of staff for Immigration and Customs Enforcement Suzanne Barr put herself on voluntary leave after details of her lewd behavior were disclosed as part of an ongoing discrimination and retaliation lawsuit. In "newly emerging affidavits," Berger reported, "one of the employees claimed that in October 2009, while in a discussion about Halloween plans, the individual witnessed Barr turn to a senior ICE employee and say: 'You a sexy (expletive deleted).'"

Striking a blow for equal opportunity pervs everywhere, Barr "then looked at his crotch and asked, 'How long is it anyway?' according to the affidavit."

Barr is accused of numerous other acts intended to "humiliate and intimidate male employees." Yet another account from the lawsuit detailed Barr's vulgar text messages to a colleague while on a boozy trip to Colombia. On the same junket, Barr allegedly offered to perform oral sex on another DHS employee. Barr, a lawyer who previously served as Napolitano's director of legislative affairs when the DHS secretary was governor of Arizona, had no law enforcement experience before ascending the federal ranks.

A few months after Barr followed Napolitano to DHS in 2009, another crony tagged along. Dora Schriro, who served as director of Arizona's Department of Corrections under then-Gov. Napolitano, was appointed by her BFF to head the Detention and Removal Operations office despite zero experience in that critical homeland security policy area. The suit claims that Schriro had a "longstanding relationship with (Napolitano)" that resulted in preferential treatment.

But DHS has nothing on the public relations slush fund created by Obamacare—and forked over to Obama on-air surrogate Kiki McLean. The longtime Democratic operative and self-described "true D.C. insider" heads up the global public affairs division at Porter Novelli, which secured a $20 million contract to peddle Obamacare to the public. The firm claims it struck gold after a "competitive bidding process." But members of Congress on both sides of the aisle have called for probes into that and other shady business-as-usual PR contracts. And HHS, headed by Secretary Kathleen Sebelius, is dragging its feet on meeting information requests.

Such obstructionism is nothing new to Sebelius, whose tenure as Kansas governor is still the subject of an ongoing criminal court case against Planned Parenthood and the Sunflower State's health officials. Last year, the plaintiffs discovered that health bureaucrats presided over the "routine" shredding of "documents related to felony charges the abortion giant faces." Sebelius doggedly fought transparency motions in the proceedings for years.

Are Obama's female inspectors general watching out for taxpayers any better than their male counterparts? As the boys in my family like to say: negatory.

Interior Department acting IG Mary Kendall is knee-stocking-deep in a conflict-of-interest scandal, which alleges that she potentially helped White House officials cover up their doctoring of scientific documents that led to the fraudulent, job-killing drilling moratorium of 2010.

Acting Department of Justice IG Cynthia Schnedar, a longtime employee and colleague of now-Attorney General Eric Holder, has an ethics imbroglio all her own. As I reported in June, she worked under Holder in the 1990s and co-filed several legal briefs with him. Schnedar recklessly released secret Fast and Furious audiotapes to the U.S. Attorney's Office in Phoenix before reviewing them. The tapes somehow found their way into the hands of the local ATF office. Both remain targets of congressional probes.

Over on Capitol Hill, Democratic women are too preoccupied with their own nest-feathering and backside-covering to police the Obama administration:

California Democratic Rep. Laura Richardson, a tax dodger and loan defaulter, received a House ethics wrist slap two weeks ago after investigators concluded she had "improperly pressured her congressional staffers to work on her campaign, verbally abused and intimidated them, used taxpayer-funded resources for personal and political activities, and obstructed the investigation," as the Los Angeles Times summed it up.

Fellow California Democratic Rep. Maxine Waters still hasn't faced an ethics trial over her meddling in minority-owned OneUnited Bank. The financial institution, in which her husband had invested, received $12 million in federal TARP bailout money after Waters' office personally intervened and lobbied the Treasury Department in 2008.