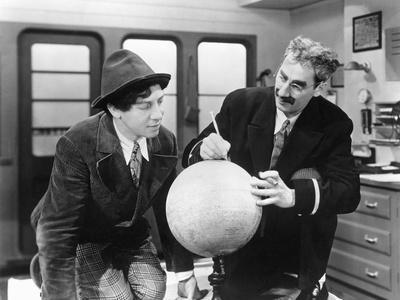 When Chico is driving Groucho crazy with his fractured English (for text of scene click here), Groucho snaps in an aside, "There's my argument! Restrict immigration!" (To play clip, click here)

This is a joke that 's even funnier when you realize that in real life they were brothers, both born in America, the sons of "Frenchy" Marx, who had emigrated from Alsace after the Franco-Prussian war.

So where Chico did learned to speak Italian dialect (to play clip, click here)? Reverse assimilation—he developed it as a survival skill in the streets of New York, to blend in if he accidentally encountered a gang of Italian boys who would beat him up for not being part of their ethnic group.

"While the Marx family  had assimilated to the larger American culture, Chico was assimilating (for camouflage purposes) to the immigrant culture of Hell's Kitchen."