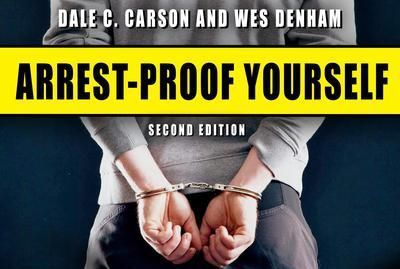 The Fulford File, By James Fulford | Why Rednecks Don't Get Arrested As Much As Minorities

Eric Peters did a piece here recently called How To Survive Traffic Stops in the New America: Submit, Instantly, featuring the case of a white biker who was apparently speeding, on drugs, had been drinking,  was carrying an unconcealed knife, and reached into his jacket without being asked to.[Aaron Snyder testifies in officer shooting trial, May 12, 2010]

All of which doesn't necessarily justify his shooting, just adds some perspective. It's possible that as drunk-drugged-speeding-legally-armed-but-not-with-a-firearm-biker, who had probably been stopped by the police before, the biker should have known better than to make what police trainers (and coroners) call a "furtive movement." But, alas, it's too late now.

However, it's not too late for respectable people like you and me to learn. In Arrest-Proof Yourself: An Ex-Cop Reveals How Easy It Is for Anyone to Get Arrested, How Even a Single Arrest Could Ruin Your Life, and What to Do If the Police Get in Your Face

, Dale C. Carson—an ex-cop, now a defense lawyer in Jacksonville, Florida—and co-author Wes Denham discuss how to deal with unavoidable police contacts, and how to avoid them.

There are a number of useful points about what to say and do, and not say and do.

That kind of thing is useful. But of course, it's only useful to people like you and me who read books.

One thing that gets clueless people jailed a lot is missed court dates. Judges get really annoyed when someone who has been released from jail based on his sworn word that he'll be back in ten days doesn't show up. But Mr. Clueless didn't mean to defy the authority of the court. He just didn't know what day it was. Or, if he knew what day it was, he might have had trouble finding the courthouse, especially since it's across town, and the time is ten a. m.

Cluelessness affects people of all races, of course. But it has what's called "disparate impact," reflected in the crime and imprisonment statistics.

Which brings us to Carson's discussion of racial profiling. Carson is not, of course, any kind of "racist". But you can't spend years on the street arresting people, and years in court defending people and have a politically correct "All Races Are The Same" viewpoint. For one thing, you'd be dead. So Carson examines a popular profiling question:

"DO WHITE TRASH GET A PASS BECAUSE THEY'RE WHITE?

"Let's talk about a group people of color often know little about: poor, clueless white people. Some black Americans have myths, of course, and think poor whites are bogeymen with white Ku Klux Klan hoods in their pockets, always ready for a nighttime lynching. On their part, some poor Southern whites fly Confederate battle flags at home and on their vehicles to signify a certain disinclination to appreciate the full panoply of America's racial and ethnic diversity. I live in a neighborhood where poor whites and poor blacks rent rooms in separate rooming houses on the same blocks. Although on paper the neighborhood is a model of integration, the two groups might as well live on separate planets." [Arrest-Proof Yourself, Page 112. Links added]

Some lower-class whites in the Jacksonville area live on boats, or floating boat-like objects, and have motorboats of their own that go fishing for illegal drugs and illegal immigrants. Carson describes the low-life lifestyle:

"They're fond of the magic herb and can be seen growing their very own shipboard marijuana bushes, which they mist and fertilize lovingly. Nothing, of course, replaces beer. They consider the 24-pack and the kegger to be the most important advances in human convenience in the last century. When in need of jollification, they hie forth to roadhouses and biker bars, where misunderstandings about women sometimes require the intervention of civil authority. When their women are in need of enlightenment, they improve their lady's understanding with a few sharp raps to the head. Their dress code runs to jeans and T-shirts. Their hair is long or shaved off, their beards scruffy, and their skin adorned with tattoos and piercings.  Got the picture? These are petty criminals, but why aren't more of them in jail? Because they're not totally clueless." [Emphasis in original]

Now, cluelessness sometimes relates to IQ, but there are also social factors:

"[L]et's consider manners first.  Although low on the social food chain, these characters don't have a chip on their shoulders about race. [Emphasis added] They are less likely to act out in the presence of police. Generally they can stifle the profanity during those crucial minutes and mumble 'Yes, officer' and 'No, officer' until the heat has passed." That's an interesting point.  If you think that police problems with African-Americans are caused by racism, ask yourself "Whose racism?" The police officer's racism—or the suspect's?

Consider the relative levels of racial animosity displayed by police officer James Crowley and Harvard Professor Henry Louis Gates. Sergeant Crowley is in a profession where racial animosity is strictly barred, and he gave mouth-to-mouth resuscitation to basketball star Reggie Lewis as he lay dying on the court of premature heart failure.

Gates, on the other hand, makes his living from racial animosity, and has for years. (He might, by the way, have benefited from reading Carson's book.)

I recently read an article about an anti-gang police tactical squad in El Salvador conducting field interviews with gang members, frequently guys who had been deported from the United States. 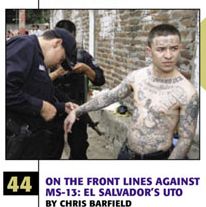 After describing a field interview with a guy named Pee Wee, who had been a gangster in Arlington, Virginia, before being deported and becoming the Policia Nacional's problem, photojournalist Chris Barfield writes:

"[The tactical squad] photographs Pee-Wee and his various tattoos since he is unknown to the officers. They document his name and let him go. Surprisingly, the contact ends in a handshake, as do many of the others we would experience during our time with the police. While the UTO [Unidad Tactica Operativa] 'rolls big,' and carries enough ammunition for a prolonged firefight, they also show remarkable courtesy and respect to the citizens they come in contact with."[On The Front Lines Against MS-13: El Salvador's UTO, by Chris Barfield, SWAT Magazine, August 2005]

Why does this sound so bizarre in today's America?

Why does sound like something that could only happen in a British detective story set in the Fifties—or possibly in a Robert B. Parker story about South Boston where both the police and the gangsters are Irish?

Well, that's the point—on that Central American street, both police and gangsters are members of the same nation. That means that they are friendlier as enemies than minorities in America are with police who are responding to their calls for help.

"Most important, they don't adopt the outdoor [i.e. street-corner] lifestyle. They're almost never visible walking on streets where they can be seen by cops riding around in cars. When they drive, their cars and pickups may be junkers, but they're street legal, so they have fewer traffic stops. They get wasted indoors, where search warrants are required, and are less likely to carry dope on their persons and in their cars. Often they grow their own marijuana, so they do not buy drugs and fall victim to police stings, undercover cops, and confidential informants. Their dress is scruffy, but T-shirts and jeans blend in better than gang colors and hip-hop gear, so they don't get targeted as quickly by police. Once they do get arrested, they have some resources. For time management, they generally can muster an alarm clock and a watch, and in emergencies a calendar. They often marry their women, so they have a wife, the 'old lady,' in addition to Mama and sisters to pay legal fees and bail bonds. When driving, they get their buzz from beer rather than marijuana. This means that if they're stopped and are not legally intoxicated, they will receive only a citation for driving with an open container—and not even that if they can slide the can out the rear window and into the truck bed before the cop gets close. Rednecks have some knowledge of police procedure. They know that police do not like to find guns, so they carry the all-purpose and legal knife. When they do carry guns, they are likely to have a permit."

Some of this group differentiation is social, relating to upbringing and society, rather than heredity. Blacks and Hispanics are less likely to be middle-class than whites, and more likely to do things that attract police attention.

Carson suggests that if you are not a member of the middle-class, you should learn how to act like one, for example in the matter of not shouting or cursing, for the brief period that it takes for the officer to tell you that you're free to go. (Upper-class is just as bad—not only do some kinds of celebrities curse and shout more than plebeians, but police react badly to people who say "Do you know who I am?")

"Middle-and upper-class black and Hispanic Americans who drive street-legal cars within speed limits; have nice manners; and avoid carrying drugs, unlicensed firearms, or stolen property in their vehicles can go years without any interactions with police, just like white Americans. They still get pulled over more often than they should, but they do not get arrested."

But there will certainly continue to be an "arrest gap," just as there continues to be a "test gap."

The important thing is not to try and close it by getting arrested yourself.