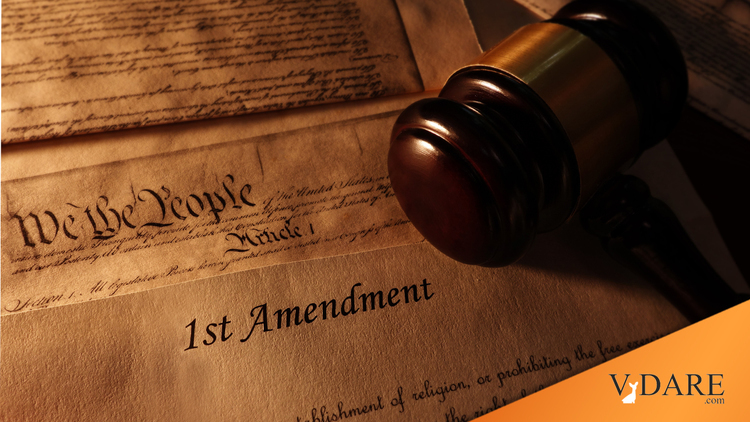 The Fulford File, By James Fulford | Angst in Arizona—Caused By VDARE.com?

Via the Volokh Conspiracy (which asks, in effect, why, if American teachers can't be disciplined for anti-American activity, they can be disciplined for being offensive to Mexicans). I learn that Arizona teacher Walter A. Kehowski is in hot water with the EEOC for spreading inappropriate opinions.

I was further surprised to learn that some of the inappropriate opinions were—mine!

According to the Arizona Republic

"Walter Kehowski, a White faculty member at Glendale Community College, in October 2003 e-mailed to all district employees several Internet links that contained remarks considered disparaging to Hispanics. Kehowski posted hundreds of Internet links relating to 'racial hatred, intimidation and supremacy,' with titles including "Mexicans Think U.S. Belongs to Them!" and "Mexican Double Standard," said the EEOC in a letter of determination, which spells out the findings of investigators."

"The links also included remarks offensive to women and religion, the report said: "'Why Islam Hates Democracy,' 'Why White (and other) Women Can't Jump a Facelift for Title IX' and 'Multiracial [sic] chickens come home - but not to roost.' "

"Kehowski could not be reached for comment, but he has previously said that he sent out the messages because he was upset over a recent Dia de la Raza celebration at which he felt students expressed racist attitudes toward non-Latinos by promoting separatism." [College, Latinos urged to talk | EEOC responds to complaint about teacher Yvonne Wingett The Arizona Republic May. 21, 2004]

This goes back to October 2003, when Kehowski apparently emailed a bunch of links from his website to colleagues at the community college.

Immediately there were calls for him to be fired, and when it was pointed out that he was protected by the First Amendment, an Arizona State legislator, Steve Gallardo, called for a law to ban college computers from being used to material "considered offensive" to minorities. Gallardo was apparently under the impression that the First Amendment doesn't cover "hate." (As Tom Lehrer said, "I hate people like that.")

How offensive were these links? Well, since I don't have the original email, I'll just comment on the ones mentioned in the Republic story.

From Vdare.com we have Sam Francis's article Multiracialist Chickens Come Home—But Not To Roost which simply says that the ideology of mass immigration is what has led to all these Muslims coming to America.

There's also my own article, "Mexican Double Standard," about the Mexican National Anthem and its bloodthirsty threats toward any foreigner who should dare to invade the borders of their realm, versus the attitude of most Mexicans that illegal immigration to the United States is a civil right.

But at least those come from an officially designated "hate site," namely us.

"Mexicans Think U.S. Belongs to Them!" is from NewsMax.com. And it's merely a wire service story from United Press International, with a less boring title added.

You call that hate? They must be very sensitive in Arizona.

The next question is: "Why is this literally a 'federal case?'"—with the EEOC intervening.

The EEOC takes the line that if anyone says anything which is considered offensive, and their employer doesn't punish them, then the employer is violating Title VII of the Civil Rights Act of 1964.

This means that everyone in America with a job must mind their multicultural manners or risk unemployment. (This does not apply to anyone who says something insulting about the white majority; the Dia de la Raza celebration mentioned above takes place on what you probably think of as Columbus Day, and is usually given over to bashing the historical American nation.)

The beliefs that Mr. Kehowski has on his web page are mostly to do with political conservatism, which means mostly right-wing Republicanism.

And discrimination on that basis is illegal too.