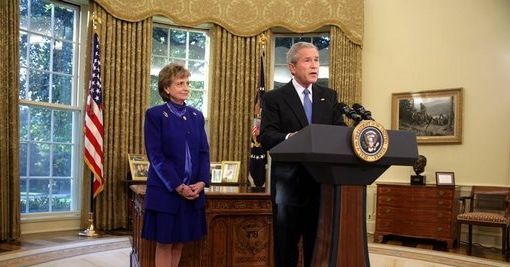 The Coffee and Donuts Defense

President Bush tells us that he knows his White House counsel Harriet Miers' heart. I have no doubt that it is a good one. But a good heart does not a great Supreme Court justice make.

Miers has been a member of Valley View Christian Church in Dallas for 25 years, where Hecht has been an elder. He calls it a "conservative evangelical church . . . in the vernacular, fundamentalist, but the media have used that word to tar us." He says she was on the missions committee for ten years, taught children in Sunday School, made coffee, brought donuts: "Nothing she's asked to do in church is beneath her."

I talked yesterday with Miers' pastor, Ron Key, who for 33 years (until a few weeks ago) was pastor of Valley View Christian Church in Dallas. "She started coming to church in 1980. She helped out with kids, made coffee, furnished donuts, served on missions committee. She worked out her faith in practical, behind-the-scenes ways. She doesn't draw attention to herself, she's humble, self-effacing."

As the court's new junior member, the 60 year old lady Harriet Miers will finally give a break to Stephen Breyer, who has been relegated to closing and opening the door of the conference room, and fetching beverages for his more senior Justices. Her ability to do this type of work with no resentment, no discomfort, and no regrets will at the least endear her to the others. It will also confirm her as the person who cheerfully keeps the group on an even keel, more comfortable than otherwise might be the case with a level of emotional solidarity.

That's lovely. But Bush did not promise grass-roots conservatives that he'd put a Harry Reid-endorsed Cheer Bear on the court.

At his Rose Garden press conference yesterday in response to the New York Post's Deborah Orin, who noted criticism of Miers from conservative women in the legal field, Bush himself played a variation on the coffee-and-donuts theme:

She is plenty bright. As I mentioned earlier, she was a pioneer in Texas. She just didn't kind of opine about things; she actually led.

And secondly, I can understand people not, you know, knowing Harriet. She hasn't been, you know, one of these publicity hounds. She's been somebody who just quietly does her job. . . . And I know her. I know her heart. I know what she believes.

There's no question that Washington could use a lot more personal humility. But Bush's derision of those who "just . . . opine" is bizarre. "Opining," after all, is what Supreme Court justices do for a living. And it's precisely Miers' lack of on-the-record opinions about vital matters of constitutional law that has conservatives across the country so troubled.

Nobody is asking Bush to put a "publicity hound" on the bench. But asking conservatives to trust that the blank-slate Miers not only has well-formed views on everything from property rights, the individual right to bear arms and the proper scope of privacy rights, to the Commerce Clause, racial preferences and presidential authority in wartime—but also has the intellectual candlepower to persuade her potential colleagues—based on little more than her Sunday refreshment-retrieving abilities is asking way too much.