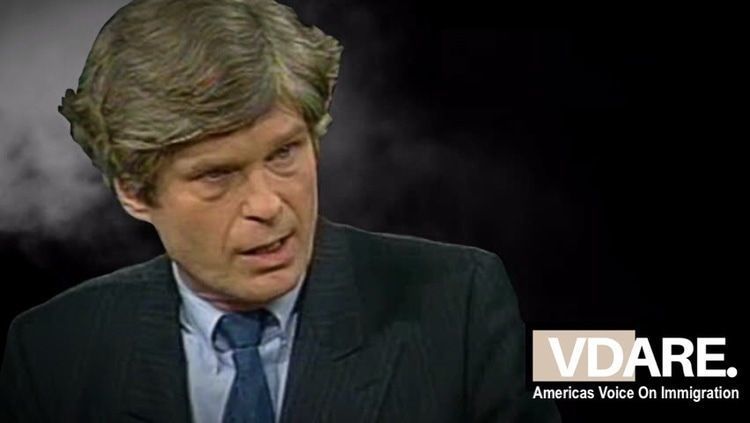 The title of tomorrow night's "Firing Line" debate, "Resolved: All Immigration Should Be Drastically Reduced," is not inaccurate, but it cushions a pricklier opinion. Let's call it: "Resolved: The Sort of People Now Entering the Country Are Changing the Character of the United States for the Worse."

The fount of disagreement is a new book, "Alien Nation: Common Sense About America's Immigration Disaster," whose author, Peter Brimelow, is present to argue the affirmative, along with Daniel Stein of the Federation for American Immigration Reform (FAIR), an anti-immigration lobbying group; Arianna Stassinopoulos Huffington, widely credited with being the brains behind her husband Michael's losing race for the Senate seat from California last year, and, you guessed it, William F. Buckley Jr. All express concern mixed with indignation at the ostensible threat to American ways.

Mr. Brimelow argues that "Race is destiny in American politics"; hence an infusion of people from Latin America and Asia bodes a dire transformation of the body politic. Ms. Huffington, like Mr. Brimelow an immigrant from Europe, directs her attack mainly at welfare and at multiculturalist endeavors, notably bilingual education, which she says are working against good old-fashioned assimilation.

The opponents remind a sympathetic audience at Bard College that other groups of newcomers (including those from Mrs. Huffington's native Greece) ran into similar opposition in other periods. On this soapbox are Ira Glasser, the executive director of the American Civil Liberties Union; Edward I. Koch, who does not fail to remind us that his parents arrived in America in the early 1900's and had three children, one of whom "became the Mayor of the City of New York"; Frank Sharry of the National Immigration Forum, a pro-immigration lobby, and Leon Botstein, the president of Bard College in Annandale-on-Hudson, N.Y. They have never met a legal immigrant they didn't like.

The subject is smack on the news. Congress is about to grapple with a plan put forward just the other day by a Federal advisory commission that would reduce legal immigration gradually by one-third. The "Firing Line" anti-immigrationists would go further; they call for "a pause" of indefinite duration in all immigration to give the nation an opportunity to absorb those who are already here.

Along with the usual sniping and ducking, tomorrow night's contestants find a few points of agreement. Nobody utters a good word for illegal immigrants, and only Mrs. Huffington makes much of the argument that immigrants hurt the economy, which even her allies grant does not reflect the opinions of most economists. Fortunately, when her information is shaky, Mrs. Huffington can make use of the debating ploys she honed at Cambridge University.

Where the sides split cleanly is over whether the United States can stand to continue taking in as many immigrants as it is now doing (nearly one million a year). "We don't need any immigration, so we shouldn't have it," Mr. Stein declares. His adversaries imply not too delicately that the current opposition is not so much to immigrants in general as to certain sorts of immigrants in particular. The testiest exchanges are incited by charges, most forcefully from Mr. Glasser, that what really bothers the antis is the makeup and possibly the complexion of the new immigrants, few of them European whites.

Michael Kinsley, the witty moderator, departs from his assumed objectivity at the end to chide the anti-immigrationists for supporting their case with polls that show that most Americans want restrictions on immigration. (Mr. Stein betrays an inclination to deport "the ivory tower, inside-the-beltway eggheads," who he charges ignore the concerns of ordinary folks about jobs and schools.)

Mr. Kinsley points out that the premise of "Firing Line" is that even majorities may benefit from persuasive argument. The less diplomatic Mr. Glasser reminds his opponents of a time when polls showed overwhelming support for school segregation.

You might wish for clearer exposition from both sides on who is paying the costs of immigration and who is reaping the benefits and fewer homilies on the nature of Americanism. Still, it's a peppy two hours that offers both the text and the subtext of a nasty argument that may be about to get nastier.