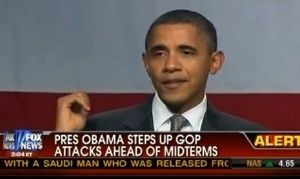 Take Your Olive Branch and Shove It, Democrats

On the eve of a historic midterm election upheaval, President Barack Obama tried to walk back his gratuitous slap at Americans who oppose his radical progressive agenda. "I probably should have used the word 'opponents' instead of 'enemies' to describe political adversaries," Obama admitted Monday. "Probably"?

Here is an ironclad certainty: It's too little too late for the antagonist-in-chief to paper over two years of relentless Democratic incivility and hate toward his domestic "enemies." Voters have spoken: They've had enough.

Enough of the 2009 Nobel Peace Prize winner's rhetorical abuse. Enough of his feints at bipartisanship. Whatever the final tally, this week's turnover in Congress is a GOP mandate for legislative pugilism, not peace. Voters have had enough of big government meddlers "getting things done." They are sending fresh blood to the nation's Capitol to get things undone.

Just two short years ago, Obama campaigned as the transcendent unifier. "Young and old, rich and poor, Democrat and Republican, black, white, Hispanic, Asian, Native American, gay, straight, disabled and not disabled, Americans have sent a message to the world that we have never been just a collection of red states and blue states," he proclaimed. "We have been and always will be the United States of America."

It's been an Us vs. Them freefall ever since.

"We don't mind the Republicans joining us," Obama taunted a few weeks ago. "They can come for the ride, but they gotta sit in back."

"You would think they'd be saying thank you," he sneered last April, when millions turned out for the nationwide Tax Day tea party protests.

"I want them just to get out of the way" and "don't do a lot of talking," he scoffed in response to prescient critics of the federal trillion-dollar stimulus boondoggle.

In addition to labeling GOP opponents of his open-borders policies "enemies" who needed to be "punished" by Latino voters, Obama accused them—that is, us—of lacking patriotism. "Those aren't the kinds of folks who represent our core American values," he told viewers of the Spanish-language network Univision.

Democratic leaders have taken their cue from Team Obama's persistent politics of polarization.

House Speaker Nancy Pelosi and House Majority Leader Steny Hoyer called vocal citizens who protested the federal health care takeover bill during the town hall revolts of 2009 "un-American," too. Remember? "These disruptions are occurring because opponents are afraid not just of differing views—but of the facts themselves. Drowning out opposing views is simply un-American," Pelosi and Hoyer blasted in an op-ed piece for USA Today last summer. "Drowning out the facts is how we failed at this task for decades."

This from the woman who called for a vengeful government investigation of grassroots opponents of the Ground Zero mosque.

Obama's pal Rep. Alan Grayson of Florida, whom the president hailed as an "outstanding" member of Congress, accused Republicans of wanting elderly people to "die quickly" and of presiding over a "holocaust in America." Vice President Joe Biden hailed Grayson as a "guy who doesn't back away from a fight, and doesn't back down from what he believes in" and told him at a fundraiser: "We owe you one, buddy." No mention of Grayson's smear of a female Federal Reserve adviser as a "K Street whore."

In California, entrenched incumbent jerk Pete Stark derided immigration enforcement activists at a town hall by asking: "Who are you going to kill today?" To an elderly constituent who opposed the health care bill, Stark retorted: "I wouldn't dignify you by peeing on your leg. It wouldn't be worth wasting the urine."

As voters who have been maligned by the ruling majority as stupid, unwashed, racist, selfish and violent headed to the polls Tuesday, Democrats released "talking points" attacking Republican leaders who "are not willing to compromise." But "no compromise" is exactly the message that un-American Americans delivered to Washington this campaign season:

Let us be clear, in case it hasn't fully sunk into the minds of Obama and the trash-talking Democrats yet: You can take your faux olive branch and shove it. Thank you.