Sins And Omissions—Review of Blood, Class, and Nostalgia: Anglo-American Ironies. 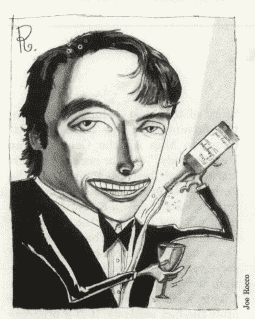 HITCHENS is perhaps the most notable contemporary specimen of what has been called the Bollinger Bolshevik. An English leftist now immigrated to Washington, D.C., he nevertheless has his work published in the most fashionable American glossies, and his new survey of the Anglo-American relationship sports a dust-jacket biography (invariably author-supplied) carefully pointing out that he was educated not merely at Oxford but at Balliol, perhaps the most patrician college there. As with Alexander Cockburn, this combination of socialism and snobbery-backed, it must be said, by talent and a Protestant work ethic both would affect to despise-has quickly established him at the top of American liberaldom.

Much of the peculiar structure of this book appears to be the result of a determination to recycle freelance articles. One such recycling provides a poignant example of Hitchens's sociopolitical androgyny, his ambivalent relationship to establishments. He visits the USS Iowa, a World War II battleship recommissioned by the Reagan Administration and just returned from a tour of duty in the Middle East. He ingratiates himself with the Iowa's captain by revealing that he is himself the son of a Royal Navy officer and saw the last British battleship, HMS Vanguard, being towed to the breaker's yard. The captain knows the punchline: "She slipped her tugs and ran aground, didn't she? Like she was protesting." The other officers are summoned and trustingly share their carefully studied and much-loved British naval lore. Then Hitchens stands on the bridge to watch a demonstration broadside—saying a silent valediction to those faraway Druse villages.  And he writes a cheap sneering account whose substance amounts to little more than the assertions that the Iowa is a gunboat, that Joseph Conrad portrayed a gunboat firing into Africa in his celebrated story of colonialism gone wrong, Heart of Darkness, and that therefore the whole enterprise is by implication, in Conrad's phrase, "incomprehensible."

As befits a Bollinger Bolshevik, Hitchens's progress through AngloAmerican history resembles that of a drunk down a corridor, lurching erratically from wall to wall. This does have the advantage of bringing some neglected corners into unusually sharp focus. For example, Hitchens emphasizes the vital role of James Burnham, one of NR's original editors, in formulating the American postWorld War II interventionist Weltpolitik, supplementing, expanding upon, and sometimes replacing Britain's global presence. Hitchens points out striking similarities between Burnham and the Winston Churchill of the 1946 Fulton "Iron Curtain" speech, which was not merely a warning against the Soviets but also a call for Anglo-American cooperation. In fact, both men at different times proposed schemes of common citizenship and even formal political union between the two countries.

But Hitchens's havering has a fatal disadvantage: he reels right past crucial historical episodes. Thus, this study of American and British foreign policy contains virtually no reference to the Soviet Union, China, the Korean War, or Israel. Britain's efforts to embroil the U.S. in both World Wars loom large-perhaps too large-but there is no discussion of why Britain itself became embroiled, or whether the American Government had its own reasons (such as Pearl Harbor) for going along. The British elite's abrupt decision to abandon the Empire after 1945, the subsequent geopolitical implosion of Britain, and the fact that during this period Britain arguably sometimes operated to the left of the U.S. in world politics is ignored. Despite American pleas, the British recognized Red China-and withdrew their forces from the Persian Gulf. Finally, there is no explanation of why Britain is now on the verge of political union not with the U. S. but with a concert of its traditional European enemies, or why the U. S. has blindly supported this implicitly anti-American endeavor.

For this and other reasons, Hitchens's book is essentially worthless as a guide to the Anglo-American relationship. It cannot even be said to have a thesis in any serious sense. Instead it has a sort of insinuation that Anglophilia, British influence, and even a desire to prop up British power were responsible for drawing the U.S. into a worldwide role.

Hitchens's omissions conveniently make this easier to argue. For instance, Korea was never a British interest and the British government was dubious about the conflict, but nevertheless sent troops at the U.S.'s behest. For that matter, it would be equally possible to argue that U. S. policy has paradoxically propped up Soviet power, materially during World War II and the detente era, and diplomatically through containment,  which tacitly conceded a Soviet sphere of interest.

Even Hitchens cannot ignore the fact that Washington was often actively hostile to Britain's imperial interests during and after World War II. But this is no problem for a student of the dialectic. Hitchens simply posits an American "anti-imperial imperialism" which was hostile to the British even while emulating them.

The value of Hitchens's work is rather as a buoy marking the submerged shoals of the left-wing psyche. It is, for example, profoundly if surreptitiously emotional. Smearing the Iowa as a gunboat is typical of its style of argument. Hitchens's opinions are generally conveyed adjectivally ("sports-check Republican"). And, of course, he is ultimately motivated by self-hatred. By the final chapter, it is clear that the dread disease of "imperialism," from which he hopes the U.S. and Britain are recovering in this new world without conquerors," actually consists of any tangible presence on the world stage at all.

All of this comes together in Hitchens's hysterical reaction to any supposed sign that the Anglo-American relationship has an ethnic underpinning, or that the U.S. itself has an ethnic identity that might be affected by immigration policy. Thus Hitchens insists on portraying the anti-bilingualism lobby "U.S. English" as a nativist anti-immigration conspiracy, although its directors are openly divided on the issue and the organization itself explicitly focuses on the single issue of language. The overwrought left-wing sensibility cannot be trusted to handle basic factual distinctions of this sort.

What is the truth about the AngloAmerican relationship? Both countries are democracies, and their foreign policy is accordingly too chaotic to be expressed as one theme, least of all Hitchens's. The relationship between them is ultimately one between peoples rather than one between the elites that attract Hitchens—the Royal Navy buffs in the wardroom of the Iowa being a case in point. Because the peoples speak the same language, they are in some sense members each of the other, sharing common cultural values of liberty, economic liberalism, and respect for law rather than power. Which is why Hitchens's self-hatred effortlessly embraces both.