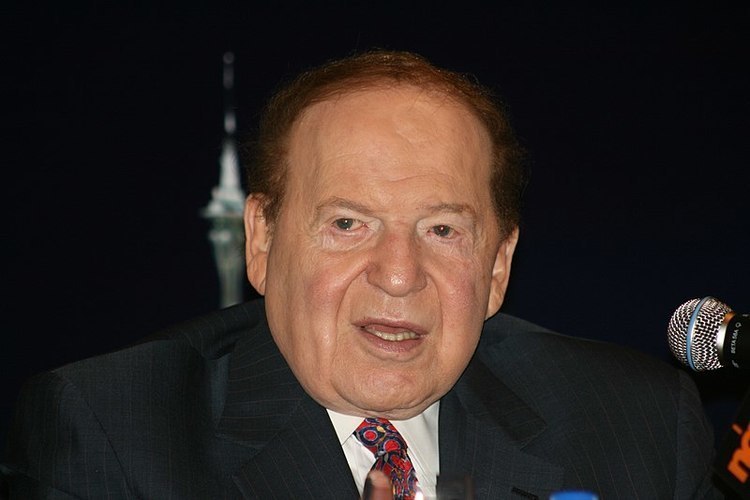 Is the Republican Party's Middle East policy up for bid?

For four days ending Sunday, a quartet of presidential hopefuls trooped to Las Vegas to attend the annual gathering of the Republican Jewish Coalition.

Impresario: Sheldon Adelson, the Vegas-Macau casino mogul whose fortune is estimated at $39 billion—8th richest man on the planet—and who dumped $92 million into the election of 2012.

This time Sheldon wants to buy himself a winner.

Ari Fleischer, press secretary to Bush 43, and a member of Adelson's RJC fiefdom, put it plain and simple: "The 'Sheldon Primary' is an important primary. ... anybody running for the Republican nomination would want to have Sheldon at his side."

One such man is Jeb Bush, son and brother to presidents, who was the prize bull at Sheldon's cattle show. Daniel Ruth of the Tampa Bay Times speculates on Jeb's motive in showing up:

Would you slink into Las Vegas to schmooze gambling mogul Sheldon Adelson who regards GOP presidential nominees as if they were trophy heads mounted in his den, if you had no interest in the White House? Bush is not going to Vegas to catch Meat Loaf's act at Planet Hollywood.

The 2016 presidential hopefuls "are falling at his feet," said a veteran Republican strategist of the 80-year-old oligarch. Each of those who came—Bush, Chris Christie, and Govs. Scott Walker and John Kasich—apparently auditioned, one by one, before the godfather.

In 2016, says Adelson's top political adviser Andy Abboud, Sheldon's "bar for support is going to be much higher. ... There's going to be a lot more scrutiny."

Guess that means no more Newts.

Victor Chaltiel, a major donor and Adelson friend who sits on the board of Las Vegas Sands, tells us Sheldon "doesn't want a crazy extremist to be the nominee." Adds Shawn Steel, a big California GOP money man, Sheldon is a "very rational guy."

Perhaps. But last fall at Yeshiva University, this "very rational guy" gave this response to a question from Rabbi Shmuley Boteach on whether he supports U.S. negotiations on Iran's nuclear program:

"No. What do you mean support negotiations? What are we going to negotiate about? What I would say is, 'Listen, you see that desert out there, I want to show you something.' ... You pick up your cell phone and you call somewhere in Nebraska and you say, 'OK let it go.'

"So, there's an atomic weapon, goes over ballistic missiles, the middle of the desert, that doesn't hurt a soul. Maybe a couple of rattlesnakes, and scorpions, or whatever.

"And then you say, 'See! The next one is in the middle of Tehran. So, we mean business. You want to be wiped out? Go ahead and take a tough position and continue with your nuclear development.

"'You want to be peaceful. Just reverse it all, and we will guarantee that you can have a nuclear power plant for electricity purposes, energy purposes.'"

Adelson's response was recorded by Philip Weiss of Mondoweiss website who was at Yeshiva and filmed the interview. [YouTube]Weiss says the audience cheered Adelson's proposed nuclear strike on Iran and no one on the stage, not Wall Street Journal columnist Bret Stephens, peeped a word of dissent.

And this is a "very rational guy," who doesn't want "a crazy extremist to be the nominee"?

This is someone Republican presidential candidates must appease, if they don't want tens of millions in attack ads run against them?

This is someone the Republican presidential hopefuls must hearken to now?

Again, so it would seem.

During his talk before the few dozen members of the RJC, Gov. Chris Christie recounted his recent trip to Israel: "I took a helicopter ride from the occupied territories" and came "to understand the military risk that Israel faces every day."

Christie's effort at bonding boomeranged. An angry Morton Klein of the Zionist Organization of America confronted Christie to demand that he explain just what he meant by "occupied territories."

For half a century, the United States has considered the West Bank occupied land where Israeli settlements are illegal under the Fourth Geneva Convention.

Whatever Christie's response, it did not satisfy the ZOA or Klein who declared: "Either [Christie] doesn't understand the issue, or he's hostile to Israel."

Whereupon Christie, in a private audience with Adelson, apologized.

A source close to Adelson told Politico that Christie made clear "that he misspoke when he referred to the 'occupied territories.' And he conveyed that he is an unwavering friend and committed supporter of Israel, and was sorry for any confusion that came across as a result of the misstatement."

The governor is a tough guy, but this sounds like groveling.

Is this what Republican presidential candidates must do now?

Kowtow to this fattest of fat cats who wants to buy himself an American war on Iran?

Is that what has become of the party of Reagan?