Many on the Dissident Right mock cuckservatives for engaging in “DR3” or DemsRRealRacists i.e. incapable of defending their values on their merits, they concede the Left’s moral premises, but accuse them of being the “real racists”, homophobes, sexists etc. Since Trump’s election, the Left is engaging 3R-PC RightwingersRRealPC—they claim it’s now the Right that wants “safe spaces.” Guess what? It’s bunk

Before discussing these alleged Rightist “safe spaces,” let’s look at a few examples of the prevailing Leftist version.

…intended to give people who might find comments ‘troubling’ or ‘triggering,’ a place to recuperate. The room was equipped with cookies, coloring books, bubbles, Play-Doh, calming music, pillows, blankets and a video of frolicking puppies, as well as students and staff members trained to deal with trauma.

But at least this Brown brainlessness was limited to a dozen or so students. Some Leftists try to turn the entire campuses into “safe spaces,” where no dissenting views are allowed: 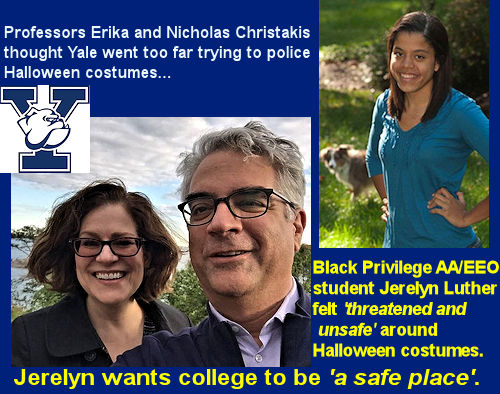 In the ensuing outrage, a minority student asserted that it was the Master's "job to create a place of comfort and home for the students who live in Silliman... it is not about creating an intellectual space!" [The New Intolerance of Student Activism, by Conor Friedersdorf, The Atlantic, November 9, 2016]. Christakis was pressured to resign.

And her successors at Yale ceased calling the heads of residential colleges “masters” because it has a “painful and unwelcome connotation that can be difficult or impossible for some students and residential college staff to ignore” [Decisions on Residential College Names and “Master” Title, Yale University Office of the President, April 27, 2016].

The NYT story focused on University of Michigan College Republican president Amanda Delekta. After the election, UM students held “evening vigil on campus—to mourn the results—and her biology teacher suspended class on the assumption. . . that students would be too upset to focus.” One Muslim student who attended the vigil

said the marchers were positive but feared for their safety. Her friends were passing on text messages—which turned out to be false—warning that white militias were going to invade the streets of Ann Arbor.

The NYT story recounts a Muslim facing threats of being set on fire for wearing a hijab on campus, which predictably turned out to be a hoax [A Muslim student in Michigan claimed a man threatened to set her on fire. Police say it’s a hoax, by Kristine Guerra, Washington Post, December 21, 2016] although treated in the NYT as gospel. 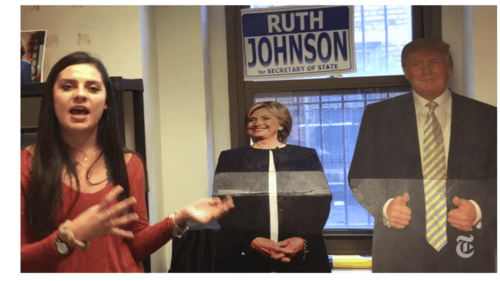 Delekta (right) responded to the vigils: “Nobody has died. The United States has not died. Democracy is more alive than ever. Simply put, the American people voted and Trump won.”

She then organized a meeting where she “sat down at a local restaurant, Sava’s, to talk about the campus mood with several students with left-leaning views.”

In other words, Delekta objected to Leftist indoctrination and tried honestly to engage those who disagreed with her. Despite the NYT stating both in the title and the text that Trump fans and “conservatives on campus” were “saying they needed safe spaces to express their views,” it did not quote or describe a single one  demanding  a "safe space."

She then compares the responses to Olga Perez Stable Cox, a teacher at Orange Coast College. After the election, Cox told her students “We have been assaulted; it’s an act of terrorism,” and complained “Living in Orange County is scary when you know you’re surrounded by so many people that are so hateful.” Then as her students explained “She tried to get everyone who voted for Donald Trump to stand up and show the rest of the class who to watch out for and protect yourself from” [Caught on video: Trump's election was an 'act of terrorism,' says Orange Coast College professor in class, by Roxana Kopetman, OC Register, December 8, 2016]

Rampell conveniently ignores that Cox tried to harass and shame Trump supporters in her class. She merely says:

Her words were clearly liberal—and hyperbolic, although perhaps not as hyperbolic as they initially seemed: In the days since her “act of terrorism” talk ripped across the Internet, she has received terroristic death threats herself.

Rampell suggest that demands to fire Cox, with the local Republican party questioning the College’s commitment to “diversity, equity and inclusivity,” are Right Wing Political Correctness: “This sounds an awful lot like an attempt to coerce educators into using only politician-approved—dare I say 'politically correct’? —language.”

Similarly, George Ciccariello-Maher, a professor at Drexel University, tweeted "All I Want for Christmas is White Genocide." Lest there was any doubt what he meant, he added

To clarify: when the whites were massacred during the Haitian revolution, that was a good thing indeed.

Many have noted the hypocrisy of the lack of outrage or even MSM coverage of this tenured professor’s call for outright murder [Slate’s hilarious justification for white genocide-wishing communist professor, By Thomas Lifson, American Thinker, December 29, 2016]. But in response to the muted reaction, Drexel condemned his Tweets, held a meeting with him, and ultimately…took no action.

Ciccariello-Maher [Email him] insisted he was mocking the “Diversity is White Genocide” meme, an argument that most MSM commentators eagerly took at face value.

But in fact, of course, Ciccariello-Maher has written an academic article explicitly endorsing the mass murder of white Haitians [‘So Much the Worse for the Whites’: Dialectics of the Haitian Revolution, Journal of French and Francophone Philosophy, Vol XXII, No 1 (2014) pp.19-39. pdf].

However, let’s assume that he was joking. Imagine if a white nationalist responded to spurious Black Lives Matters claims by saying “Black Lives Don’t Matter. To clarify: when police racially profile and shoot unarmed black teenagers, that is a good thing indeed.” Would the MSM be satisfied with a similar explanation?

Were they satisfied when Richard Spencer claimed the same thing about his disastrous NPI conference peroration?

People who purport to be so concerned w/ "political correctness" turn around and demand reprisal against this guy. Do you need a safe space?

Breitbart, the website leading the charge for his removal, is effectively demanding a safe space for white supremacists on the internet when jokes are made about their racist ideology.

An absolute bare minimum, it is the job of fellow academics, responsible journalists, and everyone who does not want to see the 4Chan troll army and the cowards sending Ciccariello-Maher death threats further empowered and emboldened, to speak and act in Dr. Ciccariello-Maher’s defense.[George Ciccariello-Maher vs. the White Power Alt-Right, December 28, 2016]

But the fact is that no-one at Breitbart called for firing Ciccariello-Maher. Rather, its columnist Lee Stranahan merely noted: “Parents about to send their children off to college should be aware of who will be waiting to teach them and exactly what ideas they plan to educate them about” [The Far-Left Ideas that Motivate 'White Genocide' Professor, December 26, 2016]

Some called for firing Orange Coast College’s Cox, who is not tenured. But that was not for her speech, but for trying to intimidate and harass her own students from expressing their views, and for implicitly punishing them academically.

In contrast, Yale’s Christakis, who unlike Cox or Ciccariello-Maher actually lost her job, simply asked students to reconsider the wisdom of telling white students what they can wear on Halloween.

It’s noteworthy that many of the victims of Leftist PC are in fact liberals or at most moderate conservatives—far from the mirror images of the self-proclaimed communists who have received only tepid criticism.

Both Rampell and King focused on the anonymous online harassment and threats that Orange Coast College’s Cox and Drexel University’s Ciccariello-Maher received. Rampell suggested this validated Cox’s obscene claims about Trump’s election, while King suggested that journalists were responsible for them by merely reporting on Ciccariello-Maher’s extreme tweets.

Of course, whenever anyone does anything outrageous, anonymous internet users will make threats, almost always empty. This is unfortunate. But to suggest that it is uniquely a reaction to “Political Correctness” is absurd.

Unfortunately, however, even well-known opponents of Leftist groupthink like Jonathan Haidt have bought into the narrative of “Right-Wing Political Correctness”:

The right shuts down free speech on campus too. (Can't we all just disagree more productively?) Rampell: https://t.co/DDczUiBJ0r

In sum: Leftist Political Correctness involves privileged groups claiming that any challenge to their ideology and power—no matter how moderate—is a psychological assault necessitating censorship, money, and even therapy. This phenomenon perfectly illustrates Nietzche’s observation that “the values of the weak prevail because the strong have taken them over as devices of leadership."

In contrast, so-called “Right-Wing Political Correctness” is merely the objection to this power-grab. If its exponents have made any demands for “inclusivity” or “safe spaces,” they have done it only to illustrate the Left’s hypocrisy.

If people like Catherine Rampell and Jonathan Haidt are serious about restoring open discourse to the campus, they must confront its true enemy: The Cultural Marxist Left.