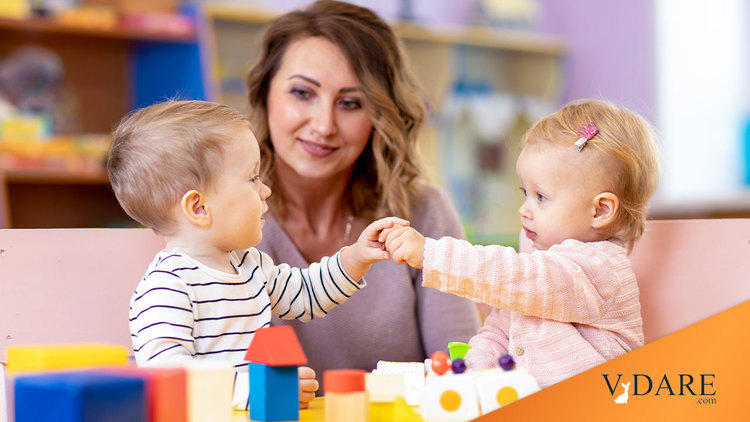 What are you doing to protect your three-year-old from the radical anti-war agenda?

The aggressive efforts by blame-America educators to indoctrinate college-age students are well-known. But even toddlers are not safe from peacenik proselytizers.

According to the National Association for the Education of Young Children (NAEYC), which oversees preschool teacher training, curriculum standards, and daycare accreditation, "That's Not Fair! A Teacher's Guide to Activism with Young Children" is "an exciting and informative" resource for "developing community-building, deep thinking, and partnership…to change the world for the better."

On page 106 of the guide, co-author Ann Pelo details an activism project she initiated at a Seattle preschool after her students spotted a Blue Angels rehearsal overhead as they played in a local park. "Those are Navy airplanes," Pelo lectured the toddlers. "They're built for war, but right now, there is no war, so the pilots learn how to do fancy tricks in their planes…" The kids returned to playing, but Pelo wouldn't let it rest. The next day she pushes the children to "communicate their feelings about the Blue Angels."

"They drew pictures of planes with Xs through them: 'This is a crossed-off bombing plane.' They drew bomb factories labeled: 'No.'

Pelo reports that the children "poured out their strong feelings about the Blue Angels in their messages and seemed relieved and relaxed." But it's obvious this cathartic exercise was less for the children and more for the ax-grinding Pelo, who readily admits that she "didn't ask for parents' input about their letter-writing – she didn't genuinely want it. She felt passionately that they had done the right thing, and she wasn't interested in hearing otherwise."

So much for "community-building, deep thinking, and partnership."

On page 115, guide co-author Fran Davidson trumpets her own anti-war biases and her difficult struggle to tolerate pro-military parents' views:

"During the Persian Gulf War, I became acutely aware of how difficult it is to honor families' values when those values are different from mine. In the classroom, I emphasized peaceful resolutions to conflicts and talked often with the children about elements of peace. Most families felt comfortable…but when our conversations about peace expanded to include discussions of the Persian Gulf War, some families became uneasy…[Some] families talked about the necessity of war to overthrow oppressors and to protect and free people…This was a really uncomfortable time for me…"

Then get out of the classroom, dear, and let the kids have a teacher (calling Jessica Lynch!) who can lead the ABCs without raising her fist and turning it into a brainwashing session on Anti-imperialism, Blood for oil, and Conflict resolution.

Pelo and Davidson's guide is also promoted by the Early Childhood Equity Alliance (ECEA), a network of activist educators. Its statement against Operation Iraqi Freedom argues: "As the still relevant saying from the 60's aptly puts it: "War is not healthy for children and other living things!"

(And allowing Saddam Hussein to gas Kurds, imprison children who refused to join the Baath Party, torture their dissident fathers, and use pregnant women to shield his soldiers, is?)

ECEA encourages early childhood educators to "look to alterative sources of information beyond the mainstream media" such as moveon.org, the Clintonite website still fatuously promoting inspections over war.

Dr. Karen Effrem, a Johns Hopkins University-trained pediatrician/researcher who has tracked the radicalization of preschool teacher training, warns that these professional educators' groups are spreading "a very radical and dangerous curriculum to teachers and child care workers who, in turn, use it on our very youngest and most vulnerable children. This is no small campaign."