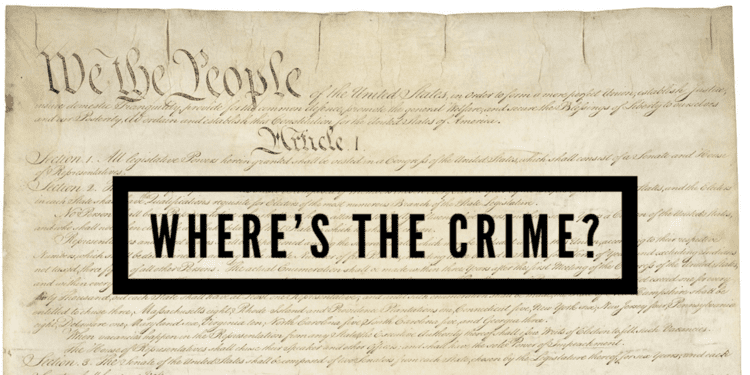 Patrick J. Buchanan: Where Are the 'High Crimes'?

"Treason, Bribery, or other high Crimes and Misdemeanors."

These are the offenses designated in the Constitution for which presidents may be impeached and removed from office.

Which of these did Trump commit?

According to his accusers in this city, his crime is as follows:

The president imperiled our "national security" by delaying, for his own reasons, a transfer of lethal aid and Javelin missiles to Ukraine—the very weapons President Barack Obama refused to send to Ukraine, lest they widen and lengthen the war in the Donbass.

The essence of Trump's crime, it is said, was that he demanded a quid pro quo. He passed word to incoming President Volodymyr Zelensky that if he did not hold a press conference to announce an investigation of Joe Biden and son Hunter, he, Zelensky, would not get the arms we had promised, nor the Oval Office meeting that Zelensky requested.

Again, where is the body of the crime?

Did Zelensky hold the press conference Trump demanded? No.

Did Zelensky announce Ukraine was investigating the Bidens? No.

Did Zelensky get the Oval Office meeting? Yes.

Did Zelensky get the U.S. weapons? Yes, $400 million in arms and Javelin missiles.

Where then is the crime? When was it consummated?

Or was this a thought crime, a bluff to get Zelensky to look into how Hunter Biden got a $50,000-a-month seat on the board of the most corrupt company in Ukraine, days after Joe Biden was in Kyiv threatening to block a $1 billion loan guarantee to the regime.

By the way, what was Biden doing approving a $1 billion loan guarantee to Petro Poroshenko's regime, which was so corrupt that it ferociously fought not to fire a prosecutor whose dismissal all of Europe was demanding?

Should Biden be nominated and elected, a special prosecutor would have to be appointed to investigate this smelly deal, as well as the $1 billion Hunter got for his equity fund from the Chinese after his father visited the Middle Kingdom.

Given last week's party-line vote in the House, where all but two Democrats voted to proceed with the inquiry, the impeachment of President Donald Trump seems baked in the cake. Speaker Nancy Pelosi's designation of Adam Schiff to head the investigation tells us all we need to know about the sincerity of her pledge to make the inquiry bipartisan.

Suppose Zelensky had agreed to an investigation into how Hunter Biden, with no experience in the energy industry, got his sweetheart deal.

Would that be impeachable for Trump? How so?

Does not the U.S. have a right to put conditions on its foreign aid and to seek guarantees that our money will not be used as graft to grifters?

A few of those listening in on Trump's phone call with Zelensky have gone public asserting that withholding the arms transfer to Kyiv imperiled our national security.

But if east Ukraine rises up and secedes from Kyiv, as Kyiv itself seceded from the Russian Federation at the end of the Cold War, how does any of that endanger America's national security? Did not George H.W. Bush himself warn, three decades ago, that a declaration of independence by Ukraine from the Russian Federation would constitute an act of "suicidal nationalism"?

And who does the Constitution charge with making the decisions as to whether military aid goes to Ukraine?

The president, or some NSC staffer who sits on the Ukraine desk?

Since the U.S.-backed overthrow of the pro-Russian regime in Kyiv in 2014, and Vladimir Putin's counter-seizure of Crimea and support for pro-Russian secessionists in Donetsk and Luhansk, there has been a debate in the USA over how to deal with this faraway problem.

Obama decided not to send lethal aid or tank-killing Javelin missiles, lest the U.S. arms escalate a war between Russia and Ukraine that Kyiv could not win.

The Republicans argued the issue at their Cleveland convention. Trump's team won that argument, but lethal aid and Javelin missiles were eventually sent to Kyiv. Now Trump has sent even more weapons.

But again, the authority to make this decision resides in the Oval Office, not in the NSC, not in the CIA, and not with those in the "deep state" who have their own settled view of what U.S. foreign policy should be.

The authority lies with the elected president of the United States.

This impeachment battle will almost surely reach the Senate.