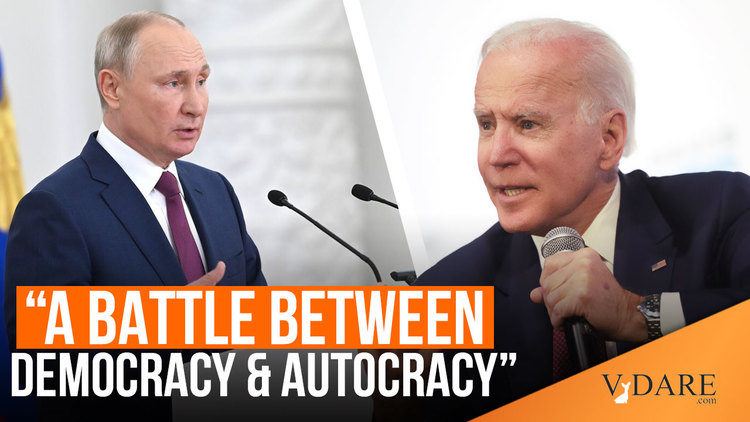 In the aftermath of Russia’s invasion of Ukraine, President Joe Biden declared to the nation and world: ”We are engaged anew in a great battle for freedom. A battle between democracy and autocracy.”

On her trip to Taiwan, Speaker Nancy Pelosi echoed Biden: ”Today, the world faces a choice between democracy and autocracy. America’s determination to preserve democracy here in Taiwan and in the world remains iron-clad.”

But is this truly the world struggle America is in today?

Is this the great challenge and threat to the United States?

Are autocracy and democracy in a climactic ideological crusade to determine the destiny of mankind?

For if that is the future, it is surely not America’s past.

Indeed, in the two-century rise of the United States to world preeminence and power, autocrats have proven invaluable allies.

When the fate of the Revolution hung in the balance in 1778, the decision of an autocratic French king to enter the war on America’s side elated Gen. George Washington, and French intervention proved decisive in the 1781 Battle of Yorktown that secured our independence.

A decade later, King Louis XVI would be overthrown in the French Revolution and guillotined along with Queen Marie Antoinette.

In World War I in 1918, the U.S. sent millions of troops into battle in France. They proved decisive in the victory over the kaiser’s Germany.

Our allies in that Great War?

The British, French, Russian, Italian and Japanese empires, the greatest imperial and colonial powers of that day.

In our war with Japan from 1941 to 1945, our foremost Asian ally was the autocrat Generalissimo Chiang Kai-Shek of China.

In our war with Hitler’s Germany, America’s crucial ally, who did more fighting than any other to ensure victory, the USSR’s Joseph Stalin, was the greatest tyrant of his age.

During the Korean War of 1950 to 1953, the leader of the South Korean regime was the dictator-autocrat Syngman Rhee.

During four decades of Cold War before the collapse and breakup of the Soviet Empire and Soviet Union, autocrats were allies of the United States. The shah of Iran. Gen. Augusto Pinochet of Chile. Anastasio Somoza of Nicaragua. Gen. Francisco Franco of Spain. Anwar Sadat of Egypt. The kings and princes of Saudi Arabia.

During that Cold War, India was the world’s largest democracy and sided most often with Communist Russia rather than the United States. Autocratic Pakistan was our ally.

Gary Powers’ U-2 flight, shot down over the Soviet Union, initiated in Pakistan, as did Henry Kissinger’s secret mission to China in 1971 to set up the historic Nixon-Mao meeting of 1972.

Across the Arab and Muslim world during the Cold War, many of our foremost friends and allies were kings, emirs and sultans—autocrats all.

The seven-year war in Yemen, in which U.S. air support has been indispensable, was waged by the Saudi monarchy to prevent Houthi rebels from retaining the power they seized in a revolution.

This recitation is not to argue that autocracy is superior to democracy, but to demonstrate that the internal politics of foreign lands, especially in wartime, have rarely been America’s primary concern.

The crucial question, and rightly so, is usually this: Is this autocrat enlisted in the same cause as we, and fighting alongside us? If so, the autocrat has almost always been welcome.

When the Arab Spring erupted, and the dictatorial President Hosni Mubarak’s 30 years of rule came to an end, we cheered the free elections that brought to power Mohamed Morsi, a leader of the Muslim Brotherhood.

A year later, Morsi was ousted in a military coup and power seized by Gen. Abdel Fattah el-Sisi, causing Secretary of State John Kerry to cheer that Egypt’s military was ”restoring democracy.”

Kerry explained that Morsi’s removal was at the request of ”millions and millions of people.”

Since then, the number of political prisoners held by Sisi has run into the tens of thousands.

If Pelosi and Biden see the world struggle as between autocracy and democracy, a question arises: As leader of the democracy camp in this world struggle, why do we not insist that our allies in places like Egypt, Jordan, Saudi Arabia, Qatar, Yemen, the UAE and Oman begin to hold regular elections to bring to power legitimate democratic rulers, rather than the autocrats that currently occupy the seats of power?

And there is a historical question about the Biden-Pelosi description of the global struggle for the future between autocracy and democracy.

When did the internal political arrangements of foreign nations—there are 194 now—become a primary concern of a country whose Founding Fathers wanted it to stay out of foreign quarrels and foreign wars?

America ”goes not abroad in search of monsters to destroy,” said Secretary of State John Quincy Adams. ”She is the well-wisher to the freedom and independence of all. She is the champion and vindicator only of her own.”

And so it once was, long ago.