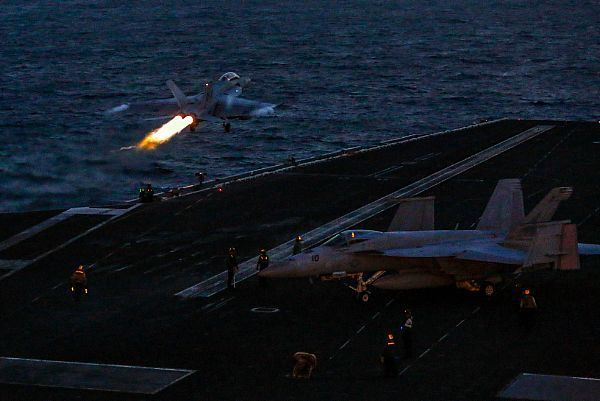 See, earlier, by Patrick J. Buchanan: 'Locked And Loaded' For War On Iran?

"All of us (should) get together and exchange ideas, respectfully, and come to a consensus—and that should be bipartisan," says Senate Foreign Relations Committee Chairman Jim Risch of Idaho.

When Lindsey Graham said the White House had shown "weakness" and urged retaliatory strikes for what Secretary of State Mike Pompeo calls Iran's "act of war," the president backhanded his golfing buddy:

"It's very easy to attack, but if you ask Lindsey ... ask him how did going into the Middle East ... work out. And how did Iraq work out?"

Still, if neither America nor Iran wants war, what has brought us to the brink?

Answer: The policy imposed by Trump, Pompeo and John Bolton after our unilateral withdrawal from the Iran nuclear deal.

Our course was fixed by the policy we chose to pursue.

Imposing on Iran the most severe sanctions ever by one modern nation on another, short of war, the U.S., through "maximum pressure," sought to break the Iranian regime and bend it to America's will.

Submit to U.S. demands, we told Tehran, or watch your economy crumble and collapse and your people rise up in revolt and overthrow your regime.

Among the 12 demands issued by Pompeo:

End all enrichment of uranium or processing of plutonium. Halt all testing of ballistic missiles. Cut off Hezbollah in Lebanon and Hamas in Gaza. Disarm and demobilize Shiite militias in Syria and Iraq. Terminate support for the Houthi rebels resisting Saudi intervention in Yemen.

The demands Pompeo made were those that victorious nations impose upon the defeated or defenseless. Pompeo's problem: Iran was neither.

Hezbollah is dominant in Lebanon. Along with Russia and Hezbollah, Iran and its militias enabled Bashar Assad to emerge victorious in an eight-year Syrian civil war. And the scores of thousands of Iranian-trained and -allied Shiite militia fighters in the Popular Mobilization Forces in Iraq outnumber the 5,200 U.S. troops there 20 times over.

We will not capitulate, and if your sanctions prevent our oil from reaching our traditional buyers, we will prevent the oil of your Sunni allies from getting out of the Persian Gulf.

Hence, this summer, we saw tankers sabotaged and seized in the Gulf, insurance rates for tanker traffic surge, Iran shoot-down a $130 million U.S. Predator drone, and, a week ago, an attack on Saudi oil production facilities that cut Riyadh's exports in half.

This has been followed by an Iranian warning that a Saudi attack on Iran means war, and a U.S. attack will be met with a counterattack. We don't want war, the Iranians are saying, but if the alternative is to choke to death under U.S. sanctions, we will use our weapons to fight yours.

America might emerge victorious in such a war, but the cost could be calamitous, imperiling that fifth of the world's oil that traverses the Strait of Hormuz, and causing a global recession.

Yet even if there is no U.S. or Saudi military response to Saturday's attack, what is to prevent Iran from ordering a second strike that shuts down more Arab Gulf oil production?

Iran has shown the ability to do that, and, apparently, neither we nor the Saudis have the defenses to prevent such an attack.

A more fundamental question arises: If the United States was not attacked, why is it our duty to respond militarily to an attack on Saudi Arabia?

Saudi Arabia is not a member of NATO. It is not a treaty ally. The Middle East Security Alliance or "Arab NATO" chatted up a year ago to contain Iran—of Egypt, Jordan, Saudi Arabia and the Arab Gulf states—was stillborn. We are under no obligation to fight the Saudis' war.

Nor is Saudi Arabia a natural American ally.

He inserted himself into first position in the line of succession to the throne of his father, who's in failing health. He locked up his brother princes at the Riyadh Ritz Carlton to shake them down for billions of dollars.

He summoned the prime minister of Lebanon to the kingdom, where the crown prince forced him to resign in humiliation. He has ostracized Qatar from Arab Gulf councils. He has been accused of complicity in the murder of Washington Post columnist Jamal Khashoggi in Istanbul.

With his U.S.-built and bought air force, the Crown Prince has made a hell on earth of Yemen to crush the Houthis rebels who hold the capital.

How does he get his country back off the limb he climbed out on while listening to the Republican neocons and hawks he defeated in 2016, but who have had an inordinate influence over his foreign policy?