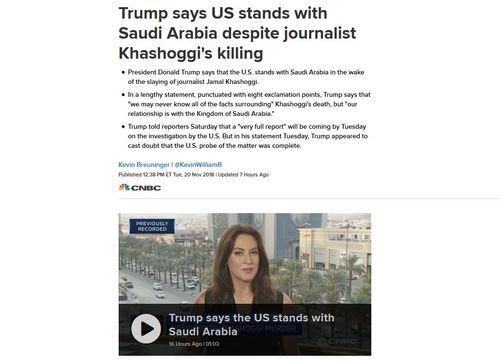 Patrick J. Buchanan: Are the Saudi Princes Really Our Friends?

The 633-word statement of President Donald Trump on the Saudi royals' role in the grisly murder of Washington Post contributor Jamal Khashoggi is a remarkable document, not only for its ice-cold candor.

The president re-raises a question that has roiled the nation since Jimmy Carter: To what degree should we allow idealistic values trump vital interests in determining foreign policy?

On the matter of who ordered the killing of Khashoggi, Trump does not rule out the crown prince as prime suspect:

"King Salman and Crown Prince Mohammad bin Salman vigorously deny any knowledge of the planning or execution of the murder... (but) it could very well be that the Crown Prince had knowledge."

Yet, whether MBS did or didn't do it, the Saudis have "agreed to spend and invest $450 billion in the United States." And a full fourth of that is for "military equipment from Boeing, Lockheed Martin, Raytheon and other great U.S. defense contractors."

"Foolishly" cancel these contracts, warns Trump, and Russia or China will snap them up. Moreover, the Saudis have agreed to pump oil to keep prices down.

Trump is unabashedly putting U.S. economic and strategic interests first. He is not going to damage our relationship with Riyadh and its royal family, even if the future king ordered a cold-blooded killing of a U.S.-based Saudi journalist he regarded as an enemy.

The stark manner in which Trump framed the issue will force the members of Congress of both parties to decide whether they wish to defy Trump, sanction the Saudis and risk the relationship.

Other contentions in Trump's statement suggest that one of the reasons he is giving the crown prince a pass on the Khashoggi killing is that he sees MBS as an indispensable ally against our real enemy in the region.

After his introductory line, Trump goes into a tear that begins: "The country of Iran... is responsible for a bloody proxy war against Saudi Arabia in Yemen."

But is this true?

In 2015, it was on the orders of Mohammad bin Salman, then defense minister, that Saudi Arabia intervened in the civil war in Yemen, after Houthi rebels in the north overthrew a Saudi puppet and overran much of the rest of the country.

It is not Iran but Saudi Arabia and the UAE, with U.S. munitions and logistic support, whose troops, bombs and blockade are responsible for the thousands of causalities in Yemen and the millions who suffer from cholera, malnutrition and starvation.

It is not the Iranians who are trying to close the last port of entry for humanitarian aid for the suffering civilian population.

Iran, said Trump, is "propping up dictator Bashar Assad in Syria (who has killed millions of his own citizens)... Likewise the Iranians have killed many Americans and other people throughout the Middle East."

But the cause of the 7,000 U.S. military dead in the Middle East in this century, and the 60,000 wounded, are the wars in Afghanistan and Iraq that were launched by the United States and George Bush, not by Iran.

As for U.S. civilian casualties, the 3,000 we lost in that monstrous atrocity of 9/11 were the victims of 15 Saudi terrorists, not Iranians.

While Iran has aided its Shiite allies in Iraq, and those allies have fought Americans, the major terrorist organizations we fight today in the Near East, Middle East and Africa—al-Qaida and its affiliates, the Taliban, ISIS, Boko Haram, al-Shabaab—are all Sunni, like the Saudis.

These terrorist groups are Iran's enemies as well as ours.

"Our paramount goal," Trump declared in his statement, "is to fully eliminate the threat of terrorism throughout the world."

But this objective is every bit as utopian as George W. Bush's second inaugural where he declared the "ultimate goal" of U.S. foreign policy to be "ending tyranny in our world."

Trump both titled and concluded his statement "America First."

And had an America First policy been pursued in this century, we would not today be tied down in these forever wars of the Middle East.

We would not have attempted to create a Western-style democracy in the wilds of Afghanistan. We would not have invaded Iraq, or attacked Libya, or armed rebels to overthrow Assad, thereby igniting a war that has cost half a million Syrian lives and made refugees of millions.

In his statement, Trump praises Saudi Arabia as a "great ally in our very important fight against Iran."

Yet, Iran has not attacked us, does not want war with us and remains in compliance with the nuclear treaty from which we walked away.

Trump is president because he promised to extricate us from the Mideast wars into which some of his closest advisers, along with some of our closest "allies," helped to plunge his country.

Is President Trump about to replicate President Bush's folly?