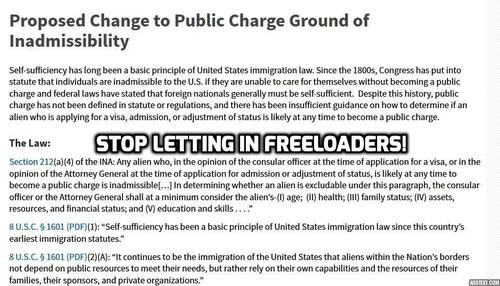 Next Monday Is Deadline For Public Comments On Aspiring Immigrants' Welfare Use. Do It NOW!

Despite the "nation of immigrants" mythology, wherein we're robotically told that "immigrants built America," a majority of today's immigrants aren't so much "yearning to breathe free" as they're yearning to eat for free.  That's the conclusion one can naturally draw from the current Center for Immigration Studies [CIS] paper 63% of Non-Citizen Households Access Welfare Programs: Compared to 35% of native households [PDF], by Steve Camarota and Karen Ziegler.

So why are they here?  Don't our immigration laws exclude people who are likely to wind up on the dole?

(i)  In determining whether an alien is excludable under this paragraph, the consular officer or the Attorney General shall at a minimum consider the alien's-

So on October 10, USCIS (which is within the Department of Homeland Security [DHS]) issued a draft rule to flesh out the definition of "public charge."  The proposed rule is pretty good (and lengthy!—no, I haven't read it in its entirety), and it's open for public comments until 11:59 p.m. Eastern Time this coming Monday, December 10.

VDARE.com-informed immigration patriots need to weigh in with supporting (or challenging) comments before that deadline, as an overwhelming majority of the nearly 16,000 comments accrued to date are in opposition, presumably stirred up by the Open-Borders cabal.  (For a sample of 50 mostly-hostile comments, see here.)

Before you write a comment, either brief or extended, you need to do at least a little further reading.  The official USCIS page Proposed Change to Public Charge Ground of Inadmissibility (October 16, 2018) gives a pretty good overview, including a Q&A section.  The full proposal, with all its official language for the proposed rule, Inadmissibility on Public Charge Grounds, is here.  But the best thing to read might be the overview by CIS's Jessica Vaughan, Proposed Public Charge Rule: Few Will Be Barred, Billions Will Be Saved (September 27, 2018).  She concludes with one shortcoming in the proposed language.

And the sub-title of a September 25, 2018 piece by CIS executive director Mark Krikorian gives the key point of the proposed rule in a nutshell—The Truth about the ‘Public Charge’ Immigration Rule: Ending the charade that food stamps and public housing aren’t welfare.

What goes into an effective comment?  Here are some tips from the fedgov itself:

Read and understand the regulatory document you are commenting on

Be concise but support your claims

Base your justification on sound reasoning, scientific evidence, and/or how you will be
impacted

Especially at this late date, it's not practical for most of us to make detailed comments about what's in the proposed rule.  (You can see my attempt at a semi-detailed comment at the end of this article.)  But immigration patriots should at least weigh in with moral support for the Administration, since those opponents are out in force with, mostly, emotion.

For example, one Grace Zeng wrote, on November 19:

I thought the USA is a equal opportunity, and a justice country. Now I find I'm wrong. Why you have the policy for the low income people who can apply the welfare, but meanwhile the government is charging them as the public burden for those who applied and received the welfare? It's contradictory and ridiculous.

For bald self-interest, it would be hard to top Sierra Bigting [really!] on November 16:

I oppose this because it would affect myself, family, friends, and future children directly.

(Unless Sierra was writing from abroad, one has to guess that s/he hasn't a clue about what's in the proposed rule.  Nevertheless, s/he's against it.)
And here's part of what one Sally Wilson wrote,

I oppose the Department of Homeland Securitys shameful proposed rule change to "public charge. The proposed policy will make immigrant families afraid to access essential health, nutrition and shelter programs. By forcing choices no family should have to make, it puts our whole country at risk.

As a former Director of Research and Planning for the West Virginia Hospital Association, I can speak to the devastating impact it will have on small and rural hospitals. Speaking as someone with a deep interest and concern for public health, I can attest that it is the most ill advised policy imaginable and will result in increased infectious disease outbreaks and public health crises that are entirely preventable. These will cross and affect all economic classes once unleashed.

We can probably classify that in the "bureaucrats need victim-clients" category.
There are, on the other hand, a few comments from people who seem to recognize what mass, poverty-stricken immigration is doing to our country.  For example, here's part of what Barbara Walker offered on October 23:

I fully support this rule change. America simply cannot support the numbers of immigrants entering this country today who are unable or unwilling to support themselves and their families. It is unfair to the American taxpayers to expect us to take on the economic woes of the entire northern hemisphere. It is painfully obvious there is no one monitoring legal or illegal immigration to ensure current policies and practices are good for the United States. People who come to this country as immigrants should be self-supporting as required and enforced by immigration policies of all other countries. Why should that be different in the U.S.?

Regular VDARE.com readers should be able to compose and submit something like that—literate and soberly-stated—before the Monday-evening deadline.  The submission form is here.
If you can offer detailed comments on the content or language of the proposed rule, all the better.  Here's my attempt after spending several hours scrolling around the rule itself and doing some outside reading, as indicated above:

DHS’s primary consideration in modernizing—consistent with existing statutes—the public-charge rules for aspiring Lawful Permanent Residents should be: Whom do we serve?

The answer is clear: DHS, like virtually every agency of our national government, should be working **for the benefit of us current citizens**, a basic point that’s laid out in the Constitution’s preamble, where it’s made clear that our country and its Constitution exist “… to secure the Blessings of Liberty to ourselves and our Posterity ...”

And immigration—LEGAL immigration—is far from a benefit to most of us citizens.  Accordingly, it’s widely unpopular among registered voters.  For example, a neutrally-worded question in the January 2018 Harvard-Harris poll …

.. revealed (page 68) that 63% of us want legal admissions reduced by half or more.  Then recognize how much higher that fraction would likely be if most citizens knew of the enormous rate of welfare use among the foreign-born population, as laid out recently by the Center for Immigration Studies in their analysis of Census Bureau data: https://cis.org/sites/default/files/2018-11/numbers-welfare-18.pdf

Thus DHS/USCIS is to be applauded for your intent to, at last, spell out enforceable criteria for “public charge.”

SPECIFIC COMMENTS REGARDING THE PROPOSED RULE