U.S. payrolls shrank by 20,000 jobs in January, deepening concern that relief from the deepest employment fall since the Great Depression would be slow to come.

But even as the economy floundered in its struggle to start creating jobs again, the unemployment rate fell, to 9.7 percent from 10 percent in December.

This apparent anomaly reflects two differing employment surveys. The survey of households, used to calculate the unemployment rate, reported a massive 541,000 rise in employment, and a 430,000 fall in unemployment. The labor force rose by 111,000.

But the job figures also show a resumption of American worker displacement: In January Hispanics gained jobs at nearly four times the rate of Non-Hispanics:

People on the patriotic side of the immigration debate saw it coming. They warned that the Obama stimulus would benefit occupations disproportionately manned by immigrants. January's pattern–with the 16 percent of the labor force that are Hispanics garnering 40 percent of the new jobs—seems to justify their "paranoia." 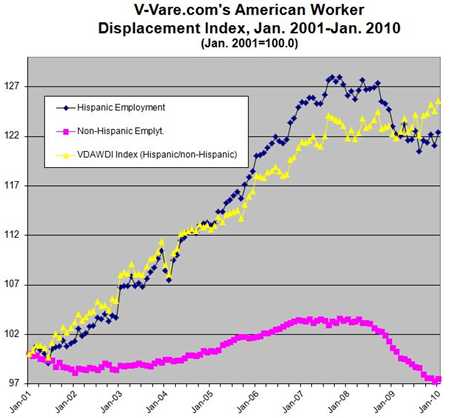 Hispanic employment is still the best proxy we have for the month to month impact of immigration on employment.

Unfortunately, the data are not seasonally adjusted, making month to month comparisons impossible. However, the displacement of native-born Americans by immigrants is clear in the year over year figures:

This is consistent with what we find in VDAWDI.

Labor force dropouts are not counted as "unemployed" although most are too discouraged to even look for work. Had they remained engaged in their job search, the native unemployment rate would have grown faster than the foreign-born rate.

Incredibly, despite the recession, it rose 1.2 percent in the past year, or 50 percent faster than the native population.

Coming at a time when many illegals are reportedly returning to Mexico, this highlights the continued role of legal immigration in driving population growth—and American worker displacement.

Only an immigration moratorium can protect the American worker.