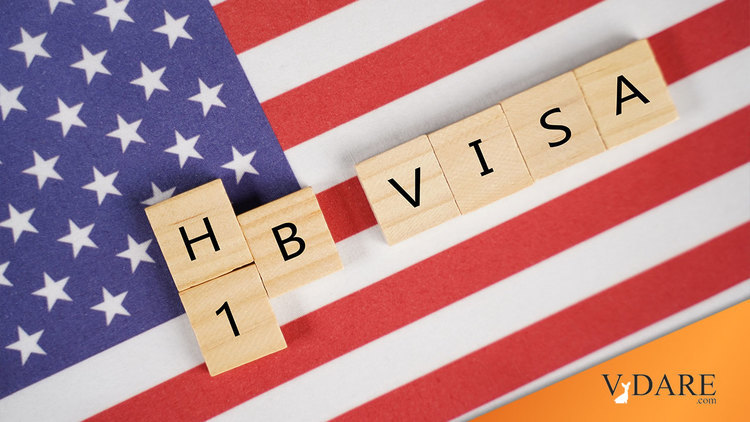 The good news: the Senate immigration bill will probably not be acted upon this year. The bad news: The House and Senate may disagree on big immigration issues like border security, but they apparently share the same vision on H-1b visas—high tech "guest workers."

The new bill would raise the H-1b cap from 65,000 to 115,000. If the higher cap is fully subscribed, next year's cap would automatically increase by 20 percent. Et cetera, et cetera.

After ten years of such compounding there theoretically could be a nine-fold increase in the number of H-1bs entering the U.S. annually. And this doesn't include the separate 20,000 H-1b cap for persons with advanced degrees in science and engineering. The SKIL bill would exempt foreign students with degrees from U.S. universities from the cap, effectively doubling the number of foreign-born MAs and PhDs permitted to remain in the country.

Implication: By 2016 the high tech labor-force could be swelled by as many as 640,000 foreign-born workers each year.

An absurd extrapolation, you say? Perhaps. But no more absurd than the current situation. Even at 65,000 annually, the H-1b influx represents an overwhelming share of high-tech employment growth in the U.S. For example, according to AeA, the trade association representing the high-tech industry, total high-tech employment rose by 61,000 positions last year—or 4,000 less than the number of H-1bs admitted.

Displacement of U.S.-born personnel by their foreign-born counterparts is strongly suggested by year-to-year changes in high-tech employment and H-1b visa issuance. (Table 1) They move in decidedly different directions:

So what's been happening to the wages of high-tech personnel?

Data compiled by AeA show real wages are still below levels reached during the bubble years. The decline is especially pronounced in the software industry, which employs about half of all H-1bs admitted. (Table 2.)

Starting salaries of high tech personnel with bachelor's degrees have declined by even more than average salaries, according to a Business Week column. [The New Global Job Shift, February 3, 2003] This is the niche most likely to be filled by incoming H-1bs.

The last refuge of H-1b advocates: the alleged incompetence of U.S.-educated personnel. High tech gurus routinely malign the ability of U.S. public schools to produce students competitive with their foreign counterparts in science and engineering.

But the average test scores upon which this perception rests conceal more than they reveal. As the editors of The Ethics and Public Policy Center's The New Atlantis reported recently:

"Two University of Pennsylvania researchers recently aggregated scores from a number of cross-national studies and found that white students in the United States, taken alone, consistently outperform the predominantly white student populations of several other leading industrial nations. 'There is compelling evidence," they write," that the low scores of [black and Hispanic students] were major factors in reducing the comparative standing of the U.S. in international surveys of achievement. If these minority students were to perform at the same level as white students, the U.S....would lead the Western G5 nations in mathematics and science, though it would still trail Japan.'"[ Is the United States Really Losing the International Horse Race in Academic Achievement? Erling E. Boe and  Sujie Shin, 2005]

Americans can do these jobs. But by breaking down the market and discouraging students from entering these fields, our promiscuous importation of H-1bs is creating the very shortage the policy is allegedly designed to fill.