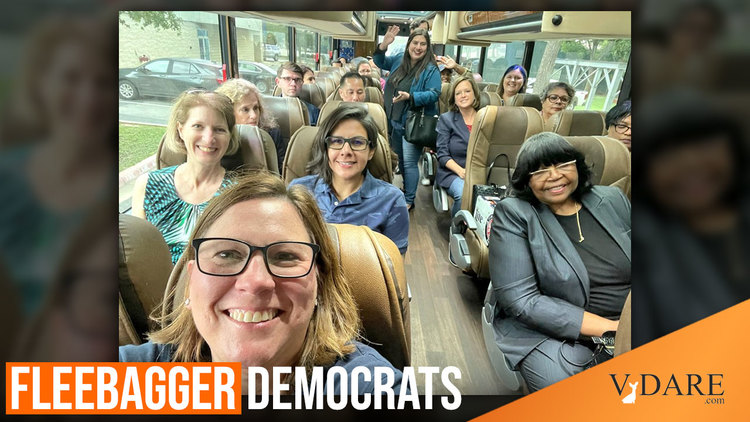 Cut-and-run Democrats are making headlines this month for bailing on their state legislative duties in order to sabotage election integrity efforts in Texas. After jetting off on a private plane to Washington, D.C., in hopes of meeting with President Joe Biden last week, six of the high-flying fugitives came down with COVID-19. On Monday, aides to House Speaker Nancy Pelosi and the White House who had hosted the runaways also tested positive for COVID-19. Every one of them claims to have been fully vaccinated.

All germs aside, we've seen these politically toxic Democrats before. In 2011, I gave a handy nickname to an entourage of liberal Wisconsin and Indiana state legislators who went AWOL to stop their GOP counterparts from passing public employee union reforms: "Fleebaggers." (I used the term as a rejoinder to leftist elites and their media shills like CNN's Anderson Cooper who referred derogatorily to Tea Party conservatives as "teabaggers," which has an offensive connotation.)

As I reported at the time, those tail-tucking Democrats paralyzed Republican fiscal reform efforts by crossing state borders and seeking refuge in neighboring Illinois, the nation's sanctuary for political crooks and corruptocrats. A prominent Wisconsin political activist summed up the cowardice of elected truants in 2011, and her words still resonate today: "As the daughter of former Wisconsin Senate Minority Floor Leader William R. Moser, D-Milwaukee, Dist. 6," Mary Magdalen Moser told me, "I am ashamed of the actions taken by the minority party to subvert our system of government by boycotting its legitimate processes. Anarchy is undemocratic, and I know that my dad is spinning in his grave right now. ... I do not support refusing to participate, because that will not solve any of the issues facing our state."

Eight years before that episode, more than 50 Texas Democratic state lawmakers holed up in Oklahoma and New Mexico for weeks to stymie a vote on Republican-sponsored redistricting plans they opposed. Oregon Democrats pulled the same stunt in 2001 to stop votes on redistricting legislation. More recently, in 2019, Republicans in Oregon emulated their colleagues on the other side of the aisle and decamped to Idaho to protest cap-and-trade legislation and stymie a quorum.

The Fleebagger virus is contagious, but of course, only Democrats are immune from establishment criticism. Throughout the entirety of the Trump presidency, Democrat obstructionists and their propagandists accused political adversaries of "subverting the democratic process." When President Donald Trump asserted his plenary powers over immigration, he was accused of having "zero tolerance" for democracy. When he appointed conservative judges, he was accused of "subverting democracy." When he challenged the deep state, he was attacked for "subverting Democratic norms." And, of course, when he challenged the legitimacy of the 2020 election results, it was tantamount to a "coup."

Everything their political enemies do subverts and sabotages "democracy," but when cut-and-run Democrats evade their own basic duties of representative government, resistance is patriotic again. Rachel Maddow and Vice President Kamala Harris compared the yellowbellies to civil rights heroes. The fleebaggers will undoubtedly be nominated for NAACP awards and the Nobel Peace Prize.

It's enough to make you superspreader sick. The solution? Permanent quarantine from office.