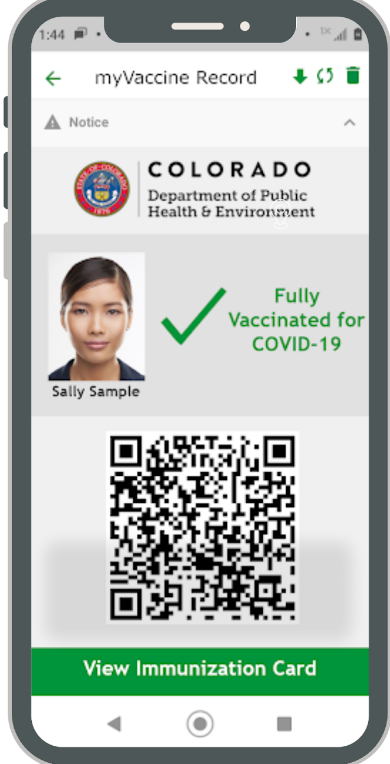 The profit-maximizing corporations that covet your "digital health" data hide behind nonprofit umbrella groups that pose as public interest do-gooders. These vaccine passport profiteers are turning millions of human beings into walking QR codes in the name of fighting COVID-19 and under the guise of bringing "normalcy" back. It's an unprecedented worldwide racket that rewards compliant sheep and punishes free-thinking, autonomy-seeking citizens.

Here in my adopted home of Colorado, the state government is pimping the Smart Health Card "allowing users to verify and share their vaccination status." Who's behind Smart Health Card technology, which is now being used in Canada, Puerto Rico, the Cayman Islands, Australia and a total of 12 states, including California, Washington state, Virginia, Rhode Island, Massachusetts and Oregon—as well as CVS and Rite Aid pharmacies, Kaiser Permanente, UC Health, Walgreens, Walmart, Express Scripts and United Healthcare Services?

The Commons Project Foundation (known as "TCP") is the massive nonprofit entity responsible for Smart Health's dominance of the vaccine passport market. It says it "builds and operates digital platforms and services for the common good." TCP oversees the Common Trust Network (which operates a global registry of organizations that issue vaccine passports). You will notice on every vaccine passport system's website and in their public relations statements an emphasis on how these intrusive tracking measures are meant "to empower individuals with digital access to their vaccination records," as Paul Meyer, CEO of The Commons Project, put it, to allow people "to safely return to travel, work, school and life while protecting their data privacy."

Who is behind VCI? The nonprofit calls itself a "voluntary coalition of public and private organizations" committed to "empowering individuals to gain access to their verifiable clinical information," including "a trustworthy and verifiable copy of their vaccination records in digital or paper form using open, interoperable standards." Its steering group is a who's who of for-profit Big Tech and Big Health corporations looking for ways to profit off personal data, including Apple, Microsoft, Cerner, Amazon Web Services, Google, Epic, the Mayo Clinic, Oracle, Salesforce, Evernorth (Cigna's health services business) and something called the Mitre Corporation.

What is Mitre? It's a nonprofit, Cold War–era conglomerate headquartered near the Massachusetts Institute of Technology and near the Deep State in McLean, Virginia, which oversees billions of dollars of federally funded research in the military, homeland security, cybersecurity and now, of course, the explosively lucrative health data market. According to Forbes, Mitre raked in $1.8 billion in revenue in 2019 and boasts a $2 billion budget funded by American taxpayers. One of its many government gigs includes a $16.3 million contract with the Centers for Disease Control and Prevention to help build "an enduring national capability to contain Covid-19," plus a $20 million joint partnership with the CDC on disease surveillance technology and services. As Forbes reported, the secretive military-industrial alliance brags ominously in its promotional material:

"You may not know it, but Mitre touches your life most every day."

Clear Secure Inc., the for-private biometric tech company that makes the touchless fast passes for airline travelers, jumped into the burgeoning vaccine passport industry this past year and filed to go public after announcing partnerships with Walmart; the NBA; and dozens of sports, entertainment, theater, casino and restaurant venues. According to one business reporter, "over 70,000 of Clear's Health Passes are being used for venue admission weekly."

In New York, 1.1 million residents have dutifully submitted to the Excelsior Pass regime. IBM Watson Works is behind the Big Apple and Empire State's vaccine credentialing system, which it likened positively to a "credit score" and launched in the fall of 2020 in order for New Yorkers to "return to the activities they love." According to Business Insider, the company generates $1 billion in annual revenue.

What the vaccine passport profiteers' feel-good, do-gooder propaganda won't tell you is how the facade of pandemic philanthropy obscures the insatiable appetite of tech oligarchs collecting vast amounts of intimate health data by giving away "free" apps and software to control freak bureaucrats worldwide. They're not doing you a favor. They're using you to construct a totalitarian regime of vax-partheid that discriminates against anyone who dares follow the money to find the truth.

This isn't about COVID-19 control. It's about mind control. Know your enemies, and for the sake of what's left of the land of the brave, do not comply.