Majority Leader McConnell "Couldn't Tell You" If He Will Block Obamnesty—Help VDARE.com Help Him Decide! 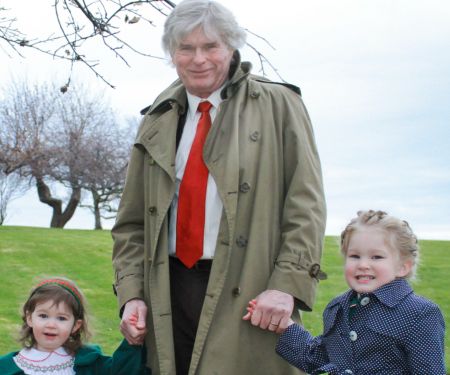 VDARE.com Editor Peter Brimelow with daughters Karia and Felicity, November 2014. It was cold.

Peter Brimelow writes: OK, maybe our advisers were right—I shouldn't have said how well our Christmas Fundraising Appeal was doing, because it promptly stalled. I know as well as anyone (see pic) how hectic the last days before Christmas can be but don't forget VDARE.com—or our childrens' future.

As we move into Christmas week, VDARE.com’s year-end fundraising appeal continues to show gratifying strength. Obviously, increasing numbers of Americans realize that immigration patriots are on their own—can rely on no established political party or Main Stream Media outlet, but must build their own institutions—which, however, because of the miracle of the internet, it is quite possible to do.

Please help us keep up this momentum—give generously (and tax-deductibly) now!

Here’s one more reason: last week, a news story brought home to me the magnitude of the task facing immigration patriots—and the scale of the possible opportunity.

As the AP headline makes clear, McConnell is extremely exercised about the impact of the Obama Environmental Protection Agency’s coal plant regulations. He says:

“I couldn’t be angrier about it and whatever we can think of to try to stop it we’re going to do. ... I know it won’t be easy with Barack Obama in the White House.”

Asked if the Senate had any obligation to address global warming, McConnell did not even pretend to have an answer:

"Look, my first obligation is to protect my people, who are hurting as the result of what this administration is doing."

According to AP, McConnell also

reaffirmed plans to make approving the Keystone XL pipeline, which would run from Canada to Texas, as the first order of business.

But on immigration, according to AP

McConnell stopped short of pledging that Congress would block Obama's recent executive actions curbing deportations for millions of people who are in the United States illegally.

Republicans strongly oppose Obama's move and are gearing up for a fight on the issue in February, when money runs out for the Department of Homeland Security, which oversees immigration matters. But the GOP's options appear limited, and "exactly how the February episode unfolds I couldn't tell you at this point," McConnell said.

To put this in perspective, just before the election Republican National Committee Reince Priebus said of Obama’s threatened Executive Amnesty:

“It’s unconstitutional, illegal, and we don’t support it…We will do everything we can to make sure it doesn’t happen: Defunding, going to court, injunction. You name it.”

And just after the election, when Obama had duly proclaimed his Executive Amnesty, Priebus sent out a fundraising email telling donors to “take a stand” against Obama by giving to the Republican Party.

But now McConnell, leader of the newly-elected GOP Senate majority, won’t say he will block Obamnesty—and adds he can’t “tell” what will “unfold” in February.

Of course, VDARE.com thinks that McConnell should be “angrier” about the existential threat that out-of-control mass immigration poses to the historical American nation—to say nothing about Obama’s clearly unconstitutional Executive Amnesty coup d’état.

Of course, VDARE.com thinks that the Keystone Pipeline—whatever its merits, we take no position—is completely trivial beside the imperative necessity to block Obamnesty, and beyond that to enact an immigration moratorium.

Of course, VDARE.com thinks that this blinkered focus on boosting big business and loosening environmental regulations—without even pretending to debate their global-warming rationale—is going to make it even easier to portray the GOP as the enemy of the working class.

But the good news: McConnell really doesn’t know what will unfold in February—because he’s aware of the mounting grassroots revolt Out There in America.

It’s long been obvious that the GOP leadership, and the party’s donors, are in effect traitors—they favor Amnesty and continued mass immigration.

But they’ve not dared to push it through since 2012, despite overwhelming Establishment and Main Stream Media support, because they fear grassroots wrath.

VDARE.com’s role is to supply facts and arguments about America’s immigration disaster to the grassroots, for free, to facilitate that righteous wrath.

It was a miracle that the grassroots stopped the Gang of Eight bill in the 113th Congress, forcing Obama to resort to this unconstitutional expedient.

It is a miracle that McConnell still feels unable to shed crocodile tears and abandon opposition to the Executive Amnesty.

At VDARE.com, we believe in miracles—and not just because it’s Christmas! We believe that Amnesty can be stopped in 2015, just as it was in 2007 and 2006—by the informed and aroused grassroots i.e. the American people (remember them?)

And we believe that, eventually, the American people will get

and much else besides!

I—and Karia and Felicity and especially their mother—will be most grateful.

There are several options for making your tax-deductible donation! Just click on one of the following links and it will bring you to the page you need to make a donation in the manner you've chosen.