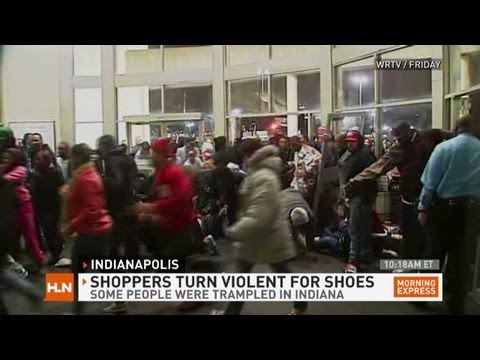 Just Do it! What The Nike Riots Tell Us

This simple phrase is the slogan for one of most ubiquitous global corporations: Nike, Inc. Relying on slave labor in the Third World to produce shoes at low costs, aiming to keep profit margins high so CEO Phil Knight can keep making massive gifts to the University of Oregon, Nike is the perfect shoe outfitter for the post-manufacturing, service-based economy that America has become.

tennis shoe was released on December 22. In a stunning moment of clarity, malls were besieged all the across the United States—by customers, overwhelmingly black, wanting to acquire a pair of Air Jordans for the princely sum of $180.

Princely is the right word, considering studies have shown a single black female only has a median net worth of $5. That means a pair of Air Jordans is worth 36 times the wealth of your average black female!

Worse, your average black family has a net worth of only some $5,677. So spending $180 on a pair of shoes for one child represents three percent of that value.

What transpired on December 22 was an outbreak—a nationwide orgy—of black people engaging in bellicosity for the sole purpose of procuring a pair of Nikes that immediately make the wearer royalty in the ‘hood.

In Indianapolis, shoppers stormed a mall, trampling fellow consumers and ripping a door off its hinges. [Video]In Seattle, police used pepper spray on about 20 shoppers fighting over the shoes. A man was stabbed in a brawl over the shoes in Jersey City, N.J. He's expected to recover.

It was this incident that prompted noted black theologian/New Black Panther leader Quanell   X to challenge Nike’s continued marketing of its product to the black community and to insist that the laws of supply and demand be abandoned to keep his people from maiming one another:

A Houston minister is calling on Michael Jordan and Nike to end the craze over the high-price Jordan shoes that have led to violence.

People at Houston's Greenspoint Mall were trampled trying to buy the $180 shoes.

A group of community activists gathered outside the mall Wednesday, standing together, saying enough is enough.

The shoes were available in limited supply.

Quanell X and others are asking Nike and Michael Jordan to lower the price of the shoes and make them accessible to everyone.

“We are not here to say down with Nike or down with Michael Jordan. I'm a Jordan fan, I'm from that era. But, we're saying that we need his influence, his leadership, the brilliance of Nike to send a message,” said activist James Dixon.

But Quanell X [Email him] doesn’t get it. Were Nike to lower the price of its signature Air Jordan shoe, the demand for this must-have black person foot accessory might well die. The Air Jordan is classified as both a need and a want in the black community precisely because the price of the shoe enhances the prestige of the person wearing them.

Where did this come from, though? When did Chuck Taylors get retired so that Air Jordans would dominate the market for inner-city youth hoping to be the next black basketball star?

Though The Blaze won’t like it, Quanell X is right when it comes to his criticism of Nike. But, sadly, lowered prices isn’t where he is correct—remember that McDonald’s 365black campaign (and dollar menu) is not keeping black people from engaging in similar acts under the Golden Arches across the country.

In Donald Katz’s book  Just Do It: The Nike Spirit in Corporate World

, we learn that, way back in the early 1990s, Jesse Jackson and his PUSH organization tried to shakedown Knight’s corporation with a boycott:

“The group demanded that Nike give out contracts to minority businesses and jobs to blacks in proportion with the business it did in black communities. PUSH officials claimed that Nike was a company run by white males that had no black vice presidents or board members—which was true.  Ministers who supported the PUSH boycott claimed from their pulpits that Nike sold 40 to 45 percent of its products to inner city youth, though Liz Dolan and her public affairs team countered with public availably sales records that indicated 13 percent of the company’s sales were to minorities. “

Of course, Nike was founded by white people. But, of course, it never had a corporate strategy aimed enriching only white people. As a publicly traded company, its goal is increasing profits to enrich all its shareholders.

Perhaps the ministers thought that inner city youth were buying 40%-45% Nike products in the late 1980s and early 1990s because so many crimes and murders were being committed over merchandise with the iconic Nike “swoosh” on it.

When the spate of Nike-related crimes was pointed out to Spike Lee, the filmmaker replied the marketing of the shoes was hardly the point.  “The real question that needs to be asked,” he said, “is what is it about these kids lives that is so bleak that they need a pair of shoes or a Georgetown jacket to give them self-worth?”

Liz Dolan and the others in Nike public relations rejected implications that Nike scientifically targeted poor kids for marketing initiatives that capitalized on specific African-American aspirations or on particular dreams of material ascension connected to sport. “We don’t target market to a demographic,” Dolan would tell reporters. “What we do is sell to psychographic segments—people who love only basketball; people who want to walk for exercise instead of run; we sell to passions and states of mind, not by age, address, or ethnicity.”

Considering that your average black kid sees only one avenue for (legitimate) success—sports—is Nike guilty of crafting a marketing strategy geared toward blacks that tells them they could be the next Michael Jordan if they only have the shoes?

Is Newport guilty for targeting blacks?

The violence over Air Jordan shoes on December22 nationwide wasn’t the first time black people have tried to kill each other to acquire a Nike product.

In a country that has long been hung up on style over substance, flash over depth, the athletic shoe and sportswear industries (a projected $5.5 billion in domestic sales of name-brand shoes in 1990; more than $2 billion in sweatpants, sweatshirts and warmup suits) suddenly have come to represent the pinnacle of consumer exploitation. In recent months the industries, which include heavyweights Nike and Reebok as well as smaller players Adidas, Asics, British Knights, Brooks, Converse, Ellesse, Etonic, Fila, L.A. Gear, New Balance, Pony, Puma, Starter and numerous other makers of sports shoes, caps and jackets, have been accused of creating a fantasy-fueled market for luxury items in the economically blasted inner cities and willingly tapping into the flow of drug and gang money. This has led to a frightening outbreak of crimes among poor black kids trying to make their mark by "busting fresh," or dressing at the height of fashion. In some cities muggings for sportswear are commonplace—Atlanta police, for instance, estimate they have handled more than 50 such robberies in the last four months. Yet it is not only the number of violent acts but also the seeming triviality of the booty that has stunned the public. In February, 19-year-old Calvin Wash was about to cross Central Park Avenue on Chicago's West Side when, according to police, two youths drove up in a van and demanded that he give them the Cincinnati Bengal jacket he was wearing. When Wash resisted, one of the youths is alleged to have fatally shot him in the back—through the A in BENGALS.

Chicago police sergeant Michael Chasen, who works in the violent crimes division in Area Four, which covers four of Chicago's 25 police districts, says his districts have about 50 reported incidents involving jackets and about a dozen involving gym shoes each month. "When you really think about the crime itself—taking someone's clothes off their body—you can't get much more basic," he says…

[Liz] Dolan sighs. She says that all of Nike's athlete-endorsers are quality citizens as well as superjocks. "We're not putting Leon Spinks in the commercials," she says. Then she says that the people who raise the alarm that Nike, as well as other sports apparel companies, is exploiting the poor and creating crime just to make money are bizarre and openly racist. "What's baffling to us is how easily people accept the assumption that black youth is an unruly mob that will do anything to get its hands on what it wants," she says, excitedly. "They'll say, 'Show a black kid something he wants, and he'll kill for it.' I think it's racist hysteria, just like the Charles Stuart case in Boston or the way the Bush campaign used Willie Horton."

Lee also says he has heard such panic before. "Everybody said last summer that my movie Do the Right Thing was going to cause 30 million black people to riot," he says angrily. "But I haven't heard of one garbage can being thrown through a pizzeria window, have you? I want to work with Nike to address the special problems of inner-city black youths, but the problem is not shoes."

Jemele Hill, the editor of ESPN Magazine, wrote almost the exact same column about Nike’s need to stop this problem in the black community.

Quanell X is right to chastise Nike. Alas, it is the pursuit of Air Jordans—the stabbing, killing, shooting, stealing, and stampeding—that show us what blogger Lawrence Auster has mordantly dubbed “The Soles Of Black Folks.”

Fitting that nothing has changed in 20 years.