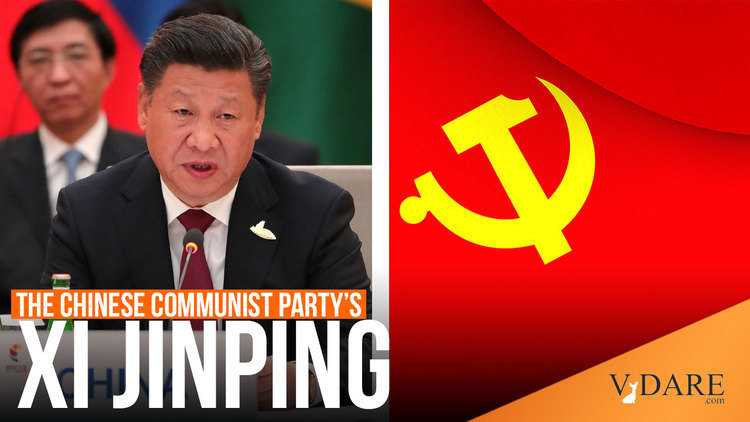 Are the ChiComs feeling their oats?

Exhibit A: British Prime Minister David Cameron spent the first three days of this week in China. The Communists greeted him with sneering arrogance.  The Global Times, a major Party propaganda organ, honked that:

The Cameron administration should acknowledge that the U.K. is not a big power in the eyes of the Chinese. It is just an old European country apt for travel and study. This has gradually become the habitual thought of the Chinese people.

Another Communist Party organ, the China Centre for International Economic Exchanges, invited to submit questions to Cameron, asked: “When will Britain return the illegally plundered artefacts?” This referred to objects looted by British troops in the 1860 sacking of the Summer Palace and the 1900 Boxer Rebellion, most of which ended up in the British Museum.

There are a number of responses Cameron might have made. For example:

But of course Cameron did not say any of those things. Nor did he nag the ChiComs about human rights abuses, as he did the Sri Lankans on a visit to that country last month.

Why the difference? Uh…

The Prime Minister’s visit was entirely commercial in purpose: to drum up business for British firms in China. In this regard it has been successful. The Wall Street Journal reported on Wednesday that $9.8 billion of trade deals had been signed; though whether settlement is to be in fiat currency or Bitcoins, for which China has a burgeoning enthusiasm, we are not told. [U.K.'s Cameron: No Regrets About Dalai Lama Meeting, By Alex Brittain And Nicholas Winning, December 4, 2013]

Presumably Cameron thinks the sneering insults from Communist Party organs are a price worth paying for all those trade deals. Presumably the ChiComs think that having given British firms access to their markets, the Brits will swallow any insults they care to deliver.

Presumably they are right.

In leaving China with a flea in his ear, Cameron is following a venerable tradition of British emissaries to the Celestial Empire.

Margaret Thatcher’s visit in 1982 to negotiate the future of Hong Kong ended with a banquet at which only one member of the leadership was present to toast her. The others, including Supreme Leader Deng Xiaoping, were in another banqueting hall toasting North Korean dictator Kim Il Sung, whose visit overlapped with Thatcher’s.

The tradition of course began with Lord Macartney’s mission to the Qianlong Emperor in 1793, seeking formal diplomatic relations, an open trading system, and fair tariffs. The Emperor ignored all that and sent His Lordship home with a famous letter to George III: “We have never valued ingenious articles, nor do we have the slightest need of your country’s manufactures...”

The abuse aimed at Cameron was, though, more flagrant than has been usual in recent years. A meeting Cameron had last year with the Dalai Lama is said to be a factor, but the Communists vented their displeasure at the time, and it seems odd for them still to be irate about it.

Exhibit B: On November 23rd China declared an ADIZ, that’s an Air Defense Identification Zone, over some islands 200 miles out in the Pacific off her east coast. The islands are currently under Japanese authority, but both mainland China and Taiwan claim ownership on historical grounds.

As one China-watcher sums up:

At one fell swoop, Beijing’s ADIZ decision has injected new problems into its ties with South Korea, Taiwan and the U.S., further soured relations with Japan, and frightened smaller nations in Southeast Asia. It appears that Xi Jinping, who by all accounts has emerged stronger from the recently held Chinese Communist Party Third Plenum, is willing to fan the flames of nationalism so he can ensure the party's popularity as he tackles economic reform at home.

Some other commentary has been more alarmist—much more, in one case:

With its fuel needs accounted for, China’s next decision is whether or not to pre-emptively attack US bases in the Western Pacific as part of its attack on Japan and the Philippines. It is almost certain to, for the same reason that Japan attacked Pearl Harbor in 1942...Ego would also play a large part in the decision for a pre-emptive attack. China wants to be recognized as the most powerful country on the planet. Successfully driving the United States from the western Pacific would put that beyond doubt.

The U.S. actually responded to the ADIZ three days later by flying two B-52s through it on “a routine training mission.” China countered with only some mild bluster. This is either China backing down or China biding her time, depending on which commentator you read.

Exhibit A and Exhibit B are both somewhat out of character for China. I’ve been watching China in an occasional and amateur way for forty years, and there’s something a bit peculiar going on.

A perception that the U.S. President is weak may also have taken hold. A perception of that perception, on the part of the administration, may have been the inspiration for that B-52 sortie—sorry: “training mission.”

The Communists may also feel their legitimacy seeping away. For decades they have presented themselves to the Chinese people as indispensable, the guardians of stability and progress, the embodiment of the nation. Sing along now, you all know the tune: “Without the Communist Party there is no New China!”

That doesn’t sell as well as it used to. Chinese bloggers openly ridicule it.

To equal “love for the motherland” with “the love for the motherland under CCP rule” is something that the Chinese government has been trying very hard to achieve. For a short period in history, they succeeded. But in today’s China, more and more people are more eager than ever to make that distinction—they love their country, but such patriotism is not dependent on who is in power.

Along with the arrogance and insecurity goes a hair-trigger touchiness about the national honor, a key component of the Sinofascist tendency I noted on VDARE.com some thirteen (!) years ago.

That, at least, has been around for a while. In his invaluable 2010 book The Party (discussed by me here), Australian China-watcher Richard McGregor records that:

Otherwise worldly and intelligent officials and friendly citizens become red with rage when topics such as Tibet and the Dalai Lama, Japan’s wartime record, the Xinjiang riots and Taiwan enter the conversation. In democracies like the U.S.A., debates evolve and governments change. In all my time in China, it was very difficult to have even a civil exchange of views on these topics with anyone in an official position...In the words of [American Sinologist] Joseph Fewsmith: “If one part of ‘civil society’ is civility, China has not yet reached it.”

Americans are by now very familiar indeed with the cult of victimology.

Let us deal very carefully with an entire nation in the grip of that cult.

John Derbyshire [email him] writes an incredible amount on all sorts of subjects for all kinds of outlets. (This no longer includes National Review, whose editors had some kind of tantrum and fired him. He is the author of We Are Doomed: Reclaiming Conservative Pessimism and several other books. His most recent book, published by VDARE.com com. is FROM THE DISSIDENT RIGHT (also available in Kindle).His writings are archived at JohnDerbyshire.com.