John Derbyshire: Anti-Muslim Truck Bollards On The Sidewalks Are No Substitute For A Border Wall

'Twas the week before Christmas / And all through the nation / We're waiting for government / To control immigration.

Well, not quite nothing. I'm reading good things about interior enforcement; Trump's travel bans were a step forward towards immigration sanity; the reform proposal President Trump sent to Congress in October was worthy enough in its own limited way.

And this new head of USCIS, the Citizenship and Immigration Services component of Homeland Security, name of Lee Francis Cissna, looks like a really good pick. Cissna was only confirmed October 5th but Radio Derb has already made two favorable  references to him. How much more evidence could you want that this guy is a good egg?

(If you do want more, read the December 20th coverage at Breitbart of Director Cissna, the week before, hammering abuses of the B visas for visitors. He actually understands the B-visa scam.)

Those are consolation prizes, though. Where's the strong action? More to the point, where's the legislation?

According to the GovTrack website, the President has signed just three immigration bills this year. Two of them were sponsored by Democrats, so you can be sure they make the situation worse in some manner, and you have to wonder why the President signed them.

The remaining measure, sponsored by Senator John Cornyn of Texas (a C-minus on the NumbersUSA immigration score card) glories in the title "Javier Vega, Jr. Memorial Act of 2017." What does it do?

Hey: If you're going to name things after people, you could certainly do worse than name one after Javier Vega, a Border Patrol officer who died while off-duty defending his family against illegal alien invaders.

Legislation-wise, though, and with no disrespect to Officer Vega, this is pitifully little to show for a year of total Republican control.

The fact of its being so little in fact tells us something about the current state of the Republican Party—something that stirs in my breast the determination never to vote Republican again—unless they get their snouts out of the trough and start moving on some real legislation to really tackle issues related to the National Question.

Government can be a mighty engine when there's a crisis to be dealt with. I recall the pride and satisfaction I felt in 1982, watching Margaret Thatcher's government reacting to Argentina's invasion of the Falkland Islands on April 2nd that year: Sample quote from Wikipedia:

I recall pictures of military engineering crews working through the night under floodlights, welding helicopter landing pads to the QE2 deck. That's how you do things when they need doing. Having won the Presidency on a promise to secure our southern border, Trump could have got the job done by summer. Israel's 400-mile security fence around the West Bank was built in a comparable span of time, and the U.S.A. has far more resources than Israel. Heck, we could just have hired the Israelis in on contract to build our wall. Alternatively, we could hire the firm that the President is hiring to build a wall around his golf resort in County Clare, Ireland.

Instead we just get these occasional picayune news stories about "prototypes" for the wall. We're trying out this, we're trying out that … but, quote, "any meaningful construction is still at least 10 months away, U.S. Customs and Border Protection (CBP) officials said."

That was in late October. Ten months on would be August 2018; and this is a government official talking, so you can take that ten months with a grain of salt.

Most likely we'll be heading into the midterms—two years on from Trump's election victory—with no wall at all.

Imagine going in to the midterms with a great big beautiful wall, paid for by a tax on remittances from Mexicans living in the States. Imagine the satisfaction of those of us who voted for Trump in 2016, and the enthusiasm that satisfaction would translate into—enthusiasm to vote for midterm candidates Trump supports.

Instead, what did we get? A tax bill. As best I can figure from the news reports, the Derbs will be better off by some sum of money between two and four hundred dollars a year.

My recurring theme this past few weeks has been the linkage between, on the one hand the constitutional obligation of Congress to approve federal spending, and on the other, the determination on the part of congressional Democrats that the 800,000 illegal aliens who've benefited from Barack Obama's un-constitutional DACA order be given Amnesty.

On December 21 this week that particular can was kicked down the road again—for the third time—when Congress passed yet another Continuing Resolution to keep the federal government's operations funded through to January 19th. The resolution was signed by President Trump Friday.

One factor in the passing of this resolution is the understanding that seems to have been reached between the White House and Congress that a bill giving Amnesty to the illegals will be passed and signed before the President's extension of the DACA order expires on March 5th next year, conditional on the pro-Amnesty forces yielding to "border security and other policy changes."[  Senators, White House lay groundwork for Dreamers deal,  By  Seung Min Kim, Heather Caygle and Elana Schor, Politico, December 19, 2017]

That's the framework for a deal. The details are still vague enough that "border security and other policy changes" could mean anything from merely cosmetic adjustments to procedures all the way up to an immigration moratorium and an eighty-foot border wall. 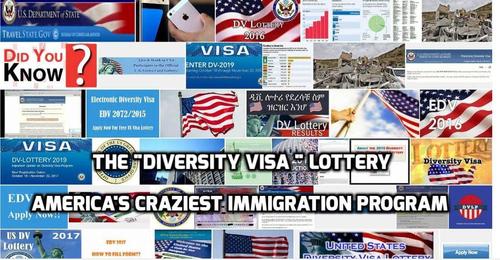 My guess is that any deal actually cut will be way down at the lower end of that range. The best I'm hoping for is an end to chain migration and the diversity lottery in return for Amnesty.

My hopes aren't high. For Democrats, ending chain migration would mean the annihilation of their next cohort of voters. The Main Stream Media would portray it in terms of wailing infants being ripped from their mothers' arms. The mechanics of chain migration—that colossal multiplier effect—are poorly understood by the general public, and the Opposition Party intends to keep it that way.

The Diversity Lottery may be easier to kill. It is so absurd, a skillful propaganda operation by the White House could easily make it very unpopular.

But then, Amnesty for the DACA illegals without an end to chain migration, would mean that today's 800,000 would swell to eight million early in the next decade, to eighty million by mid-century. A successful propaganda effort on that would involve getting the electorate to do mental arithmetic … so forget it.

I'm therefore going to predict that the deal we get in January or February will be Amnesty for the DACA illegals in return for an end to the diversity lottery plus some cosmetic changes at the southern border—making the border post restrooms transgender, something like that. Changing the paint scheme, perhaps.

And even if I'm wrong and we somehow get chain migration killed off, even that is only a foot in the door of real reform. There is, of course, no prospect for the abolition of Birthright Citizenship being part of the upcoming deal.

Peering forward past the January-February deal, in fact, looking out all the way to the horizon, I see no prospect at all of the administration tackling Birthright Citizenship. In the 70-point proposal President Trump sent to Congress in October, the topic wasn't mentioned. Apparently, it doesn't even form one-seventieth of the administration's thinking about immigration reform.

So this particular abuse, this cynical belittling of U.S. citizenship, will continue into the indefinite future.

That's good news for the Anchor Baby industry, at least. We got a reminder of that particular sector of the national economy this week when the Wall Street Journal ran an article about Saipan, a small U.S. territory in the western Pacific.

A regulatory change in 2009 meant that Chinese and Russian tourists could visit Saipan for a spell of up to 45 days without a visa. The idea was to pep up the island's economy, which depends heavily on tourist hotels and casinos. So a lady from those countries with a bun in the oven can just hop on a plane, check in to a Saipan hotel, give birth, and become mother to a U.S. citizen:

The good news is that the visa waiver is a regulatory policy, not a law so that it can be changed by the President Donald Trump's Department of Homeland Security.

But that's only good news if someone at DHS is paying attention, and gives a damn.

There’s another industry that will benefit from a cuck on immigration—the bollard business:

Clark County on Wednesday finished installing close to 800 steel posts between the street and sidewalks along the Las Vegas Strip to increase pedestrian safety.

The posts, known as bollards, are interconnected by underground steel frames. They can withstand a head-on collision from a 15,000-pound vehicle traveling 50 mph.

This is one example of what I call the bollardization of the West, a side-effect of our elites' enthusiasm for keeping our countries wide open to crazy Islamists keen to kill as many infidels as they can by driving trucks at them.

It's happening all over. Here in New York there are bollards in Times Square and bollards on Fifth Avenue around Trump Tower. Central Washington, DC is thoroughly bollarded. The city of Nice in France, where an Islamist killed 86 people last year, has responded with some serious bollardization. Cities in Britain are getting bollarded up.

Next big customer for bollards: the city of Melbourne in Australia. Last week in that fine city, a 32-year-old man intentionally drove his car into a crowd of pedestrians, injuring 19 of them. The driver there was a refugee from Afghanistan. A senior police officer on the site told the BBC that the perp had "attributed his actions to perceived mistreatment of Muslims." [Melbourne attack an isolated incident, says PM Turnbull, BBC, December 22, 2017]

I guess that's "mistreatment" as in "letting Muslims come live in our countries and leech off our public welfare systems."

If you're a recent graduate looking for a career choice, you might want to consider getting into the bollard business.

Then there will be real change, change that immigration patriots can cheer on whole-heartedly.