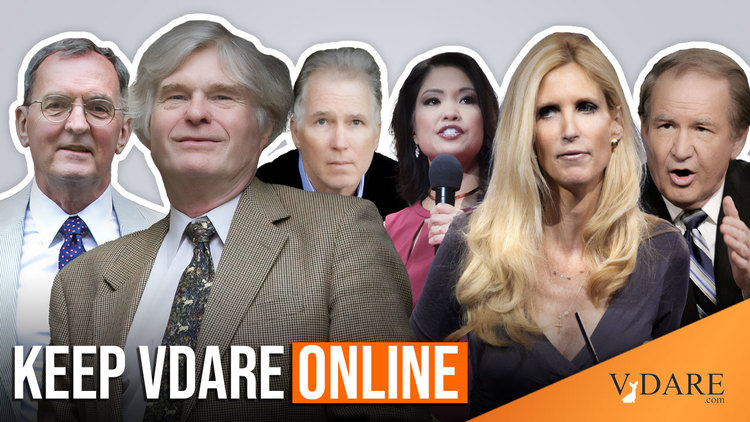 On May 31, 2021, in VDARE.com Is Building A Fortress—Visible And Invisible,  I introduced the five initiatives critical to the survival of immigration patriotism as a movement, and VDARE.com specifically. Each week in June I’ll be focusing on one initiative, and below I start with Initiative #1, that is, Keeping VDARE.com Publishing.

VDARE.com is a non-profit publishing information to educate the public on the negative effects of mass immigration, and to serve as the voice of the Historic American Nation. This work is not easy and it is not cheap. Please consider becoming a donor today, to fuel this work.

More than any other issue, Donald Trump’s victory in 2016 was a referendum on immigration. Unlike the self-interested and sheltered GOP Establishment, ordinary Republican voters know America is more than an idea or commercial marketplace. They know it is an irreplaceable people with a shared history, ancestry, and culture. They know the survival of the United States depends on strict immigration laws and demographic realism.

VDARE.com has articulated these concerns more powerfully than any other publication since our 1999 founding. For two decades, VDARE.com founder Peter Brimelow’s Alien Nation has been the Bible for immigration patriotism. Without what VDARE.com called “The Sailer Strategy” (that inreach rather than outreach would win the white base), without Ann Coulter’s Adios America, inspired by VDARE.com, and without the examples of VDARE.com friends like Pat Buchanan and Michelle Malkin, there would be no President Trump, and immigration would remain the unmentionable Third Rail of American politics.

Since the takeover of the Trump administration by malicious actors like Jared Kushner, and the election of Biden, immigration patriotism has again faded dangerously into the background. Without a critical mass of public awareness and engagement, meaningful reform is impossible. Through VDARE.com’s unrivaled news, analysis and ideas, there is no one better positioned to bring immigration back into the political spotlight.

To move on from Trump’s defeat, Americans must accept some difficult truths. The GOP Establishment, Conservative Inc., and Fox News are not going to save us. VDARE.com, on the other hand, is one of the most censored publications in America for a reason. Our hostile elites know that if the American electorate could hear us, we would take back our country in a matter of weeks.

Non-profit journalism is, of course, where VDARE.com started, and although we have grown remarkably these twenty years, it remains the core of what we do. VDARE.com publishes numerous items every day including blogs, articles, letters, and videos that inform the fight to keep America American.

The VDARE.com team is small but ambitious. Our mission is to provide our readers with the critical information necessary to engage with their communities—friends, schools, local leadership and nationally elected officials—about the negative effects of mass immigration, and the beauty and fragility of America’s national identity. VDARE.com is the voice of the Historic American Nation, and your support amplifies that voice—the voice that so many are working overtime to silence.

VDARE.com is entirely funded by donations from readers like you.

We don’t chase news cycles or obsess over the political horserace. We care about America remaining as it should be, for ourselves and our posterity. That means honoring our past, remaining clear-eyed and proud about our cultural heritage, and fighting to preserve what is rightfully ours.

VDARE.com is not a subsidiary of a giant media company or a pet project of a major Beltway think tank. We are an independent voice, informing the fight to keep America American.

VDARE.com is free. We take no ads, and even if we wanted to, the current political climate won’t allow it—we’ve been totally demonetized. We put up no paywalls. We do this because we believe advocacy and education play vital roles in bringing about needed change.

But we can’t do it without your help. It’s your donations that keep VDARE.com publishing.

The path America is going down is one of radical remaking and destruction. The Main Stream Media elites and their Big Tech allies are not interested in the truth. They are interested in one thing, and one thing only—helping their political cronies tear down and then remake America into something you and I and our children will find utterly unrecognizable.

As our legal, technical and security costs increase, we depend ever more on reader support. That is why I am counting on your financial support today.

If I have your support, I will never, ever stop fighting and winning the battle to keep America American. So please, give your most generous contribution today.

PS: All donations to VDARE.com are fully tax deductible. However, many of our readers are interested in giving anonymously. For more information on anonymous giving, please email me at lbrimelow@vdare.com.