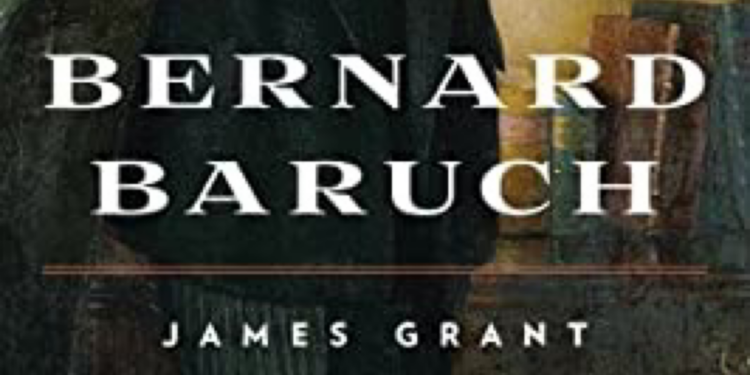 Review of Bernard Baruch: the adventures of a Wall Street legend, by James Grant

According to Jim Grant, Dorothy Parker once said that two things confused her: the theory of the zipper and the exact function of Bernard Baruch. This last confusion is not merely widespread; it is militant. The business of America may be business, but it is not its favorite leisure reading or topic of dinner-table conversation. Financial journalists learn early to accept that their field is not only harder to figure out and more difficult to write about than politics or culture; it is also inherently repellent to their media peers. Like all journalism, it beats working for a living, but not with the same fanfare.

One consequence of this schism in American culture—for there are of course millions of Americans who think about nothing but business, albeit mutely and ingloriously—is that public figures who come from the business side are apt to be viewed somewhat selectively. The undertone of puzzlement in last year's reviews of the first volume of George H. Nash's definitive life of Herbert Hoover, for example, arose from the fact that it turned out not to be about politics at all, but was instead a detailed study of the arcane but hyperactive world of turn-of-the-century mining promotion, in which the future President spent his youth. Equally, while there have been four biographies of Bernard Baruch, they have focused almost exclusively on his public career as chairman of the War Industries Board and general-purpose sage to the New Deal. Baruch's Wall Street prowess has been taken on faith, or rumor.

Baruch would have liked it that way. Grant, however, has proved to be an unusual biographer. Formerly the bond-market columnist of Barron's, he now publishes his own fortnightly commentary on interest rates. By working through the records with technical knowledge and remarkable assiduity, he has been able to establish, among other things, that contrary to legend Baruch did not foresee the 1929 Crash, and was quite badly hurt in it. His financial assets fell from the $22 to $25 million range in 1929 to about $16 million in 1931. He was far from being one of the richest men in America. Yet newspaper columnists, many of them quietly subsidized by Baruch, went on asserting the contrary and pounding both ideas into the public skull. The political influence Baruch pyramided upon this financial fame was equally illusory—or at least intangible. It attracted both the indignation of the Nazis, who marked him for death, and the suspicion of Franklin D. Roosevelt, who constantly maneuvered in his amiably lethal way to keep Baruch and his allies away from real responsibility. But in fact much of the time Baruch was essentially a political courtier, lavishing dinners and shooting trips on the mighty in return for the privilege of their presence, a sort of Washington hostess on a grand scale, whose actual raw power was marginal at best.

To those interested in financial markets, Grant's work is valuable in itself. No one is always right in the stock market. Despite his failures, Baruch was by any standard except that of his own reputation a fine speculator. He made his initial fortune with a series of daring coups, often as a result of inside information gathered in the course of his work as a broker, a practice that would now be illegal. But he was not addicted to risk. Although he remained an active trader into his nineties, he became cautious as soon as he could. This meant he often sold too early, but it was also the key to his surviving the Crash. There is a considerable professional literature on the art of speculation; Baruch's post-Crash memorandum to himself, reproduced by Grant and containing the ringing resolution, "in general, run quickly," will certainly merit a place in it.

But beyond this, Baruch's trading persona was clearly the precursor of his political attitudes. Nominally a conservative Southern Democrat—his father, a physician, fought for the Confederacy and was subsequently a member of the Ku Klux Klan—Baruch "ran quickly" whenever he found himself on the losing side of an ideological dispute, whether it was the inadvisability of imposing reparation payments on Germany at Versailles or the value of a gold standard during the New Deal. "As a young man he became rich by taking chances," observes Grant, "but as an old man he became famous by playing it safe."

Baruch's flexibility was more than self-interest and sycophancy. Although he had views about everything, he had systematic thoughts about nothing. For a speculator, this can be a very helpful trait, because it means that he can reverse himself without shame when the markets don't agree with his judgment, as inevitably happens. In politics, it meant that Baruch, as head of the war Industries Board in 1917, could sincerely and enthusiastically enforce a kind of socialism, although few should have been more aware of the power of market forces. Grant's Misesian critique of this episode in economic history is a model. Baruch was intermittently enthusiastic about the vision of a command economy for the rest of his life, usually with himself in a prominent role. It probably appealed to his ego as much as to his intellect—and the ego of a speculator must be voracious. After World War II, when Baruch began to complain continually about inflation's gathering momentum, his view of its causes ("greed, profiteering, interest-group politics, unsound money, and disregard of the national interest") was so vague as to cast doubt on how well he understood inflation beyond instinctively knowing it was a Bad Thing. Which was a rare enough perception at the time.

When Baruch died in 1965 at the age of 94, NATIONAL REVIEW described him as a "good citizen" in the Stoic mold, "not passionately committed to party, faction, of cause . . . firm in his belief that lawful government is part of the reasoned order of nature . . . ready to do his part defending it." He was one of the sinews holding society together, rather than the unyielding bone that gives it shape. In Grant's elegant account, the tendency of the business world to produce such men emerges as a major reason why its concerns command so little attention in polite society, and in the politics of the twentieth century.