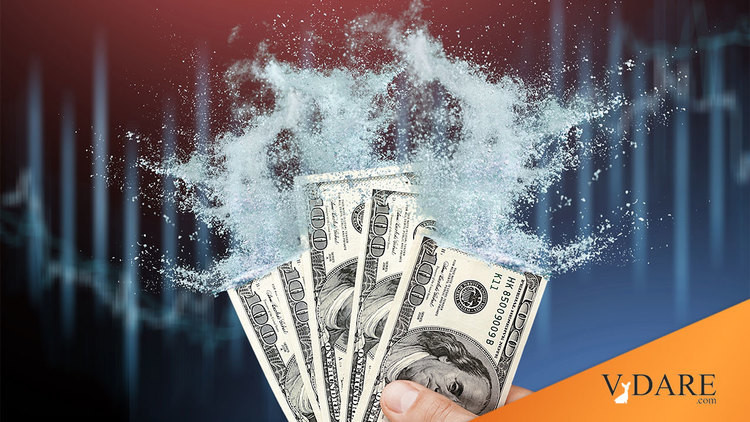 How Will Obama's Deficits Be Financed?

Who remembers economists' hysteria over the "Reagan deficits"? Wall Street was in panic.  Reagan's fiscal irresponsibility was bringing the end of the world.

The fiscal year 2009 federal budget deficit that Obama is inheriting, and adding to, will be ten times larger in absolute terms than Reagan's biggest and a much larger share of GDP in percentage terms.  Yet, economists are sending up no alarms.

The central issue of the stimulus and bailout plans is how to finance the massive budget deficit. This issue remains unaddressed  by economists and policy makers.

As far as I can tell, the government, its advisers and cheerleaders think financing the deficit will be a cakewalk, like the Iraq War.

I am tempted to claim that economists' nonchalance about the massive deficit is an indication that Krugman and the whole lot of them are converts to supply-side economics—"deficits don't matter."  I triumphed, and economists have become my acolytes. The Nobel Prize will arrive tomorrow.

Obama's deficit is problematic.  It is a massive deficit, far beyond anything ever before financed on planet earth. It is arriving at a time  when pressures on the dollar as reserve currency have mounted from decades of rising trade deficits. The deficit is hitting the financial markets when the rest of the world is in turmoil from ingestion of toxic Wall Street financial instruments. The US must service massive debt when the US economy is hollowed out from the offshoring of manufacturing and professional service jobs. The Obama deficit is a far more serious deficit than the "Reagan deficits."

As President Reagan's first Assistant Secretary of the Treasury for Economic Policy, my job was to find and implement a cure for "stagflation."

This problem worsened during Jimmy Carter's presidency.  Reagan used the "misery index," the sum of the unemployment and inflation rates, to boot Carter from office.

The way this policy was implemented was to use easy monetary policy to stimulate demand and high tax rates to restrain excessive consumer spending that could push up inflation.  The Keynesian economists did not understand that the high tax rates contributed to inflation by restraining the output of goods and services, while the easy money drove up prices.

Keynesians had no solution for the problem their policy had caused, so Congress and President Reagan turned to supply-side economists who offered a solution: restrain demand with tighter monetary policy and increase supply with greater after-tax rewards.

Supply-side economics reversed the policy mix of demand-side economists.  Instead of easy money and high tax rates, there would be tighter money and lower tax rates.

This change caused consternation.  Keynesian economists, who sat atop of the profession, bitterly resented the de-throning of their orthodoxy.  They turned on supply-siders with a vengeance.  We were "voodoo economists," "trickle-down economists," "tax cuts for the rich economists."  Keynesians had been the great defenders of budget deficits, but Reagan's were intolerable.  They forgot their own Kennedy tax rate reductions. Supply-siders were bringing the end of the world.

Federal Reserve chairman Paul Volcker was part of the problem.  Volcker had limited economic understanding.  He did not understand the worsening boom-bust cycle that the Keynesian policy had set the Fed upon.  He viewed the Reagan tax rate reductions as a Keynesian stimulus to consumer spending that would worsen the inflation, the subduing of which he saw as his responsibility.  He feared that the tax rate reductions would cause inflation and that he would be blamed.

At the Treasury we had weekly meetings with Paul, attempting to bring him into an understanding of what it meant to reverse the policy mix. We patiently explained  the importance of the Fed bringing money growth down slowly as the tax rate reductions came into play in order to avoid a monetary shock to the system.

Volcker just couldn't get it.  He thought the Reagan Treasury consisted of dangerous inflationists.  He went home to the Fed and turned off the money supply, reasoning that if there was no money growth he couldn't be blamed for the inflation that Reagan's fiscal policy would cause.

Volcker's fears were reinforced by his advisors.  As the Treasury's representative at the Fed's meeting with its outside advisors, I heard Alan Greenspan, Volcker's successor, tell Paul that in view of the Reagan tax rate reductions (which Greenspan also saw as a demand stimulus) "monetary policy was a weak sister that at best could conduct a rear-guard action."

It was amazing to us at Treasury that the Federal Reserve chairman could not understand that monetary policy controlled inflation and that fiscal policy, or the right kind of fiscal policy, helped control inflation by increasing the output of goods and services.

But this was over Volcker's head.  Instead of giving us the gradual reduction in the growth of the money supply, he slammed on the brakes.  The economy went into a serious recession just as Reagan's tax cuts passed.

The embittered Keynesians wanted to blame the recession on the tax cuts, but that was inconsistent with their own analysis. So they seized on the deficits that resulted from the recession and blamed the tax cuts.  This was also inconsistent with Keynesian analysis. However, they used writings by people who had popularized supply-side economics. Some of these people made claims that "tax cuts pay for themselves."  In other words, there would be no deficits.

The forecast went wrong for an entirely different reason. The Keynesian orthodoxy of the time was that it was impossible for the economy to grow without paying for it with a rising rate of inflation. Yet, the supply-side position was that by reversing the policy mix, the economy could grow while the rate of inflation fell, which is in fact what happened during the 1980s and 1990s.

As economic forecasting was locked into the "Phillips curve"—the belief that inflation was the price of full employment, and that unemployment was the price of lower inflation—the Reagan administration's budget forecast was restrained by the "Phillips curve."  Orthodoxy would not permit us to forecast the extent to which a supply-side policy would bring down inflation as the economy grew.  Even if we had been able to disregard forecasting orthodoxy, our forecast would have been off as Volcker brought money growth in below target.

Wall Street believed that the "Reagan deficits" would cause inflation, but, of course, they did not cause inflation as they were the consequences of the collapse in inflation.

This shows how totally wrong conventional opinion can be even when it tries to think.  Today no policy maker or establishment economist is thinking at all.

The "Reagan deficits" were neither financed by printing money nor dependent on recycling of surplus dollars by trading partners. The deficits were no threat to the dollar, which was thought to be too strong. The increased after-tax return on investment reduced the flow of US capital abroad, and we financed our own deficit.

This brings us back to the original question:  How is the Obama deficit going to be financed?