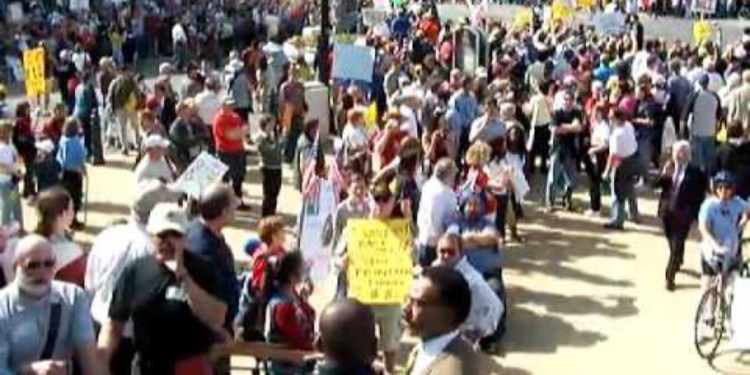 How the Left Fakes the Hate: A Primer

If you can't stand the heat, manufacture a hate-crime epidemic.

After years of covering racial hoaxes on college campuses and victim sob stories in the public arena, I've encountered countless opportunists who live by that demented mindset. At best, the fakers are desperately seeking 15 minutes of infamy. At worst, their aim is the criminalization of political dissent.

Upon decimating the deliberative process to hand President Obama a health care "reform" victory, unpopular Beltway Democrats and their media water-carriers now claim there's a Tea Party epidemic of racism, harassment and violence against them.

Yet, the claims that Tea Party activists shouted "nigger" at black House Democrats remain uncorroborated. The coffin reportedly left outside Missouri Democratic Rep. Russ Carnahan's home was used in a prayer vigil by pro-life activists in St. Louis protesting the phony Demcare abortion-funding ban in Obama's deal-cutting executive order. Videotape of a supposed intentional spitting incident targeting Missouri Democratic Rep. Emanuel Cleaver at the Capitol shows no such thing. Cleaver himself backed off the claim a few days later. He described his heckler to The Washington Post in more passive terms as "the man who allowed his saliva to hit my face." Slovenliness equals terrorism!

The FBI is now investigating the most serious allegation—that Tea Party activists in Virginia are somehow responsible for a cut gas line at the home of Democratic Rep. Tom Perriello's brother. But instead of waiting for the outcome of that probe, liberal pundits have enshrined the claim as conclusive evidence of the Tea Party reign of terror.

Need more reasons to treat the latest Democratic hysteria with a grain of salt the size of their gargantuan health care bill? Remember:

Then, as now, being a Democratic Party official means never having to say you're sorry for smearing conservative dissent.