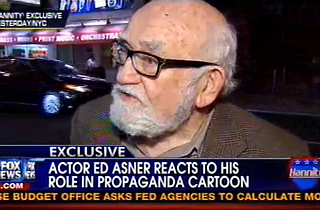 Confronted by a producer for Fox News Channel’s “The Sean Hannity Show” this week, the left-wing celebrity claimed he couldn’t remember “a thing (he) said” on a vile propaganda video produced and published by the California Federation of Teachers. Asner narrated the unforgettable eight-minute anti-capitalist screed geared toward children.

Think Occupy Wall Street meets Sesame Street. “Things go downhill in a happy and prosperous land after the rich decide they don’t want to pay taxes anymore,” Asner warbles in a folksy grandpa voice. After education reform journalist Kyle Olson of EAGNews.org blew the whistle on the film’s vulgar cartoon depiction of a “rich” man urinating on the “poor,” the teachers union whitewashed the animated images from the video.

While the Occupy-cheerleading teachers have to concoct such fantasy scenes, informed Americans remember that it was the Occupiers themselves who openly defecated in the streets. What’s even more grossly comical is the sight of pampered Asner shilling for the “progressive” war on prosperity while ignoring Big Labor’s own self-serving evasion of their “fair share” in taxes.

The California Federation of Teachers, an AFL-CIO affiliate that rakes in an estimated $22 million in coerced dues, enjoys nonprofit, tax-exempt 501(c)(5) status. So does CFT’s larger counterpart, the California Teachers Association, which collects a whopping $300 million in annual dues. While they burn through mountains of dues lobbying for everyone else to pay higher taxes, these Democratic partisan heavies pay nothing in either federal or state income taxes. Zero, zip, nada. In theory, the unions are entitled to this special status because their “primary” purpose is to “secure better working conditions, wages and similar benefits” for their members.

In practice, of course, the unions are Democratic Party front groups that shovel hundreds of millions of dollars to liberal causes and candidates — against the will of their rank-and-file members and often without their knowledge.

Mark Levin’s ever-vigilant Landmark Legal Foundation has pressured the Internal Revenue Service for more than a decade to force national teachers unions to file proper federal reporting and IRS statements regarding their hidden political expenditures. (The overwhelmingly Democratic donations are not tax-exempt.) As a result of Landmark’s investigative work, the Wisconsin Education Association admitted in 2006 that it had failed to pay more than $171,000 in federal taxes on Democratic political expenditures.

Given the immense difficulty that dissenting teachers across the country have had in challenging the abuse of their dues for political purposes, it’s clear this is the tip of Big Labor’s tax-evasion iceberg.

“What the documents don’t show,” FBN noted, “is whether union members like teachers, firemen and cops get invited to these junkets — or even approve of or know about the use of their dues to outright buy and run resorts, or spend on junkets, among other things.”

Then there’s the Obamacare Cadillac tax exemption for unions. Delivered behind closed doors and out of sight of C-SPAN cameras, the Obama White House cut a lucrative sweetheart deal with AFL-CIO, Service Employees International Union and other labor groups to shield them from the federal health care mandate’s steep 40 percent excise tax on high-cost health care plans. The 90 percent of Americans who don’t belong to unions and participate in these plans must pay their “fair share” beginning in 2013.

But Big Labor’s cozy Cadillac tax escape clause is effective until 2018. Even after that deadline, union dental and vision plans will remain exempt. The cost? $60 billion in foregone tax revenue.

Who are the greedy, selfish, filthy-rich tax evaders pissing on the poor and politically unconnected now?