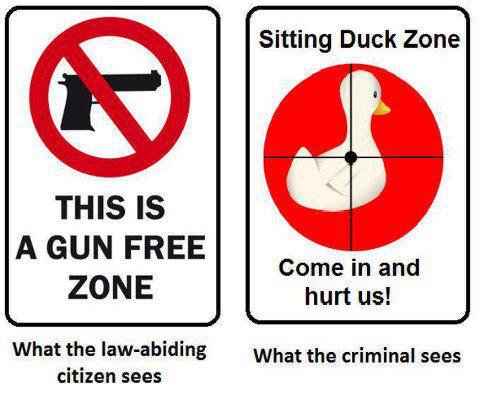 In the wake of several mass shootings in gun-free zones around the country, the mood of State legislatures supporting the right of citizens to self-protection has gone into hyperdrive. More and more states are choosing to not prohibit law-abiding people from carrying sidearms.

In 23 states, the decision to allow or prohibit the carrying of concealed weapons on campus is made by each college or university individually. And, of course, given the liberal makeup of most college and university administrations, the vast majority of them prohibit students and faculty from carrying firearms on campus. Those states are: Alabama, Alaska, Arizona, Arkansas, Connecticut, Delaware, Hawaii, Indiana, Iowa, Kentucky, Maine, Maryland, Minnesota, Montana, New Hampshire, Oklahoma, Pennsylvania, Rhode Island, South Dakota, Vermont, Virginia, Washington and West Virginia.

“Because of recent state legislation and court rulings, eight states now have provisions allowing the carrying of concealed weapons on public postsecondary campuses. These states are Colorado, Idaho, Kansas, Mississippi, Oregon, Texas, Utah and Wisconsin. During the 2015 legislative session, Texas' legislature passed a bill permitting concealed weapons on campus and making it the eighth state to permit guns on campus. The legislation will take effect in August 2016.

“Utah remains the only state to have statute specifically naming public colleges and universities as public entities that do not have the authority to ban concealed carry, and thus, all 10 public institutions in Utah allow concealed weapons on their property. Recently passed Kansas legislation creates a provision that colleges and universities cannot prohibit concealed carry unless a building has "adequate security measures." Governing boards of the institutions, however, may still request an exemption to prohibit for up to four years. Wisconsin legislation creates a provision that colleges and universities must allow concealed carry on campus grounds. Campuses can, however, prohibit weapons from campus buildings if signs are posted at every entrance explicitly stating that weapons are prohibited. All University of Wisconsin system campuses and technical community college districts are said to be putting this signage in place. Legislation passed in Mississippi in 2011 creates an exception to allow concealed carry on college campuses for those who have taken a voluntary course on safe handling and use of firearms by a certified instructor.

“Recent court cases have also overturned some long-standing systemwide bans of concealed carry on state college and university campuses. In March 2012, the Colorado Supreme Court ruled that the University of Colorado’s policy banning guns from campus violates the state’s concealed carry law, and in 2011 the Oregon Court of Appeals overturned the Oregon University System’s ban of guns on campuses, allowing those with permits to carry concealed guns on the grounds of these public colleges (Oregon's State Board of Higher Education retained its authority to have internal policies for certain areas of campus, and adopted a new policy in 2012 that bans guns in campus buildings). In both cases, it was ruled that state law dictates only the legislature can regulate the use, sale and possession of firearms, and therefore these systems had overstepped their authority in issuing the bans.  See the "Guns on Campus: Campus Action," page for more information on these rulings, board policies and other campuses that allow concealed carry on their grounds..”

In the retail business world, most companies have a policy stating that they will abide by State and local laws relating to the carrying of firearms. Notable exceptions to this practice are Starbucks, Whole Foods, IKEA, Peet's Coffee & Tea, AMC Theaters, Cinemark Theaters, California Pizza Kitchen, Toys R Us, Buffalo Wild Wings, Sonic Drive-In, Chili’s Bar & Grill, Wendy’s, Jack In The Box, Applebee’s, Waffle House, Chuck E. Cheese’s, Costco, Jo-Ann Stores, Simon Shopping Malls, Sterling Jewelers (Kay, Jared, Shaw and others), T.G. I. Friday’s, and Walgreens—which have a corporate policy prohibiting the carrying of a firearm on their property. Of course, this list is by no means complete.[VDARE.com note: Click on links above for contact info—see this list for more.]

As I have said before in this column, I strongly recommend that people either refuse to do business with companies that have anti-gun policies or IGNORE corporate policies prohibiting concealed carry where State laws allow concealed carry, as did the man recently in a Charleston, South Carolina, Waffle House—and by so doing successfully defended himself and others against an armed robber.

I further recommend that, if possible, people LEAVE states that deny citizens the right to legally defend themselves. Plus, I will never understand how men and women who claim to believe in the Bill of Rights can be a police officer or sheriff’s deputy in a State that requires them to enforce laws that forbid citizens from being armed. Whether they understand it or not, these officers and deputies are facilitating police-state societies. Sheriffs, especially, are in a position to interpose the authority of their office to protect the constitutional rights of the citizens of their counties. And that is exactly what they should be doing.

What only the most radical anti-Second Amendment zealots fail to understand is guns in the hands of good guys is hands down the biggest deterrent to crime that there is. Gun-free zones are nothing more than open invitations to would-be killers to target those institutions or places of business.

As professor John Lott notes, “Since at least 1950, all but two public mass shootings in America have taken place where general citizens are banned from carrying guns. In Europe, there have been no exceptions. Every mass public shooting has occurred in a gun-free zone. And Europe is no stranger to mass shootings. It has been host to three of the six worst K-12 school shootings and by far the worst mass public shooting perpetrated by a single individual.”

Professor Lott goes on to say,

“The diary of the Batman movie theater killer, James Holmes, was finally released just a few months ago. He decided against attacking an airport because of the ‘substantial security.’ Out of seven theaters showing the Batman movie premiere within 20 minutes of the suspect’s apartment in 2012, only one banned permitted concealed handguns. That’s the one he attacked.

“Or take a couple of cases from last year. Elliot Rodger, who fatally shot three people in Santa Barbara, Calif., explained his reasoning in his 141-page ‘manifesto.’ He ruled out various targets because he worried that someone with a gun would cut short his killing spree. Justin Bourque shot to death three people in Canada. His Facebook page made fun of gun bans, with pictures of defenseless victims explaining to killers that guns are prohibited.

“Americans seem to understand these points. A June Rasmussen Reports survey found that 68 percent feel safer in neighborhoods where guns are allowed, while just 22 percent would feel less safe. A Gallup poll last December found by a whopping 63 to 30 percent margin that Americans thought guns in their homes made them safer.

“If you don’t think deterrence works, ask yourself if you would post a sign in front of your home saying it is a ‘gun-free zone.’ It’s very likely that such signs aren’t going to be going up in any neighborhoods soon.”

This is a fact: good guys packing send bad guys packing—sometimes all the way to the Promised Land. Amen. So be it. It’s called the law of sowing and reaping.

I further recommend that Christians find another church if the one they are attending has a pastor who does not ENTHUSIASTICALLY support the right to keep and bear arms. Such a pastor is completely void of even a basic understanding of Biblical and Natural Law. By his lack of support for the Natural right of self-defense, he is putting the lives of his congregants in danger and helping to facilitate those who would terrorize and oppress us. How can Christians tolerate such a pastor?

I also encourage readers to actively assist efforts in your home State to legalize the right of law-abiding, adult citizens to arm themselves throughout their communities—including in schools, colleges, churches, banks, etc. For example, in my home State of Montana there is currently a petition drive underway to put a proposed State law on next year’s ballot to allow CCW permit holders to carry on school campuses. I wholeheartedly support this effort.

Momentum is on the side of the Second Amendment. This was a record-breaking summer for gun sales nationwide, and State legislatures are increasingly fed up with gun control laws that continually endanger the people of their states. And every mass shooting that takes place only serves to fuel the fire of gun rights. Gun-grabbers like Barack Obama and Hillary Clinton are not only on the wrong side of public opinion; they are also on the wrong side of history.

If you don’t own a handgun: BUY ONE. If you own a handgun and the laws of your State allow you to carry it: CARRY IT. If you haven’t been properly trained in the use of firearms, get that training NOW. Practice. Learn how to defend yourself and your loved ones. And if your right to self-defense is currently prohibited by the laws of your State, work like crazy to change those laws—or move to a State that recognizes your Natural right of self-defense. But to do NOTHING only makes it easier for the bad guys and harder for the good guys.