Forget The President! What did The Press Know - And Why Didn't They Know It?

[See also our earlier media and immigration reports Discoloring the News, and Read Webzines, Not Mainstream Treezines, For The Truth On Immigration] 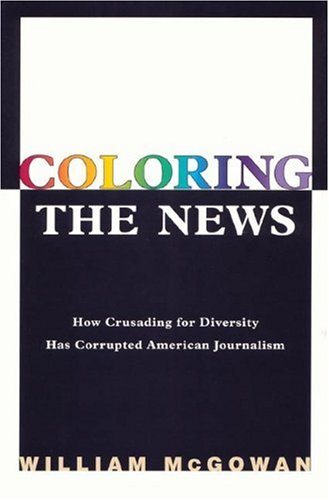 By all reports, William McGowan’s book Coloring the News: How Crusading for Diversity Has Corrupted American Journalism is better researched than Bernard Goldberg’s insider memoir, Bias. It also has a more specific focus. The crusade for diversity has altered the face of American journalism and led to the firing of numerous ideologically diverse journalists, including, McGowan notes, Scott McConnell. McGowan has chapters on media coverage of gays and feminists, affirmative action, race and crime. Most important, there’s a 38-page section on media attitudes toward immigration.

The greatest disservice that politically correct journalism has done to this country is that it has stunted the debate on immigration. We've moved to a de facto open-door immigration policy without ever discussing it as a nation.

This led to the lax immigration policy that let the hijackers on Sept. 11 slip in under the wire and operate here. The weaknesses in the immigration system were long ignored or denied by the press. To that extent, the press bears some responsibility for our national unreadiness on that day.

But curiously – or perhaps not curiously - this immigration section wasn’t discussed much in the reviews of Coloring the News. Still, Dan Seligman did smuggle a mention of it into the Wall Street Journal:

In a major New York Times series on immigration, readers are told that assimilation — the traditional melting-pot model — is "seen as a dated, even racist concept." The Times has denounced proposals for reducing immigration totals as "rude inhospitality" and "racist or at least xenophobic."

Among the immigration stories McGowan reports spiked or spun:

Think of those 7,000 gang-related killings next time the Wall Street Journal tells you that the War on Terror must not be allowed to interfere with the illegal immigration of “busboys.”

McGowan focuses a great deal on what the New York Times, America’s most influential newspaper, refuses to discuss. The Times has reacted to his expose by …refusing to discuss it. According to McGowan’s website, the Times has not only failed to review it, but one of their editors told the San Francisco Chronicle that

“One, I'm not convinced that it appeals to the kind of general audience we normally look for. I also think there's a question, and I don't know the answer: Is this newspaper . . . the best place to discuss a book that is so critical of this newspaper?”

It seems that the only way a book critical of the Times will get a mention is when it hits their famous best seller list. McGowan is right to say that, in refusing to review his book the Times is validating his “serious and well substantiated charges of journalistic malpractice, journalistic malfeasance and journalistic favoritism on the part of the Times.”

The bad news is that the reason VDARE.COM and other internet resources exist on the web is that we have to do this to get around this mainstream “wall of silence.”

The good news is that, as Tamar Jacoby pointed out in Commentary, that it’s starting to work.