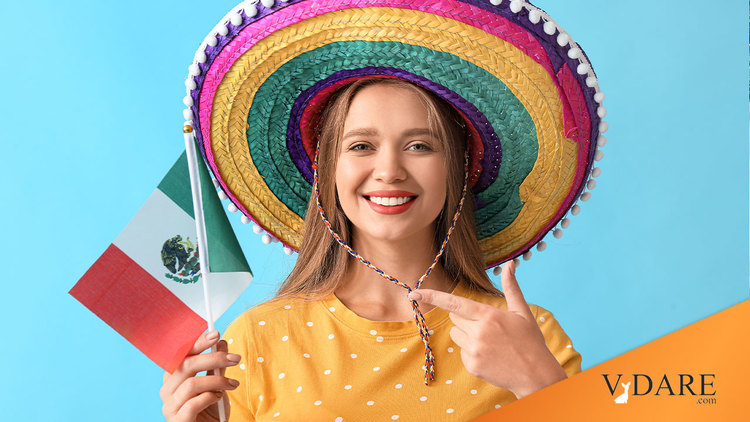 If you're like most Americans, you probably have not yet recovered from the surfeit of self-indulgence you enjoyed on Cinco de Mayo, the fifth of May, which seems to be the nation's newest holiday and one almost intentionally designed to remind us that we are not really a nation anymore at all.

What the Post meant was that business has discovered the holiday, which celebrates a fairly obscure Mexican military victory over a French army on May 5, 1862. Mexican food, Mexican beer, Mexican costumes and Mexican music are now big enchiladas in this country, as are Mexican voters, which is why President Bush every year gushes over Cinco de Mayo far more than he does over such fading fiestas as Washington's Birthday.

Whatever else the new holiday commemorates, Cinco de Mayo reminds us of things that ought to be important for the real Americans whose nation is slowly vanishing along with the public celebration of their own heroes and achievements.

One item it should remind us of is that it gives the lie to the claim that we are really a universal nation or a "proposition country," as certain misinformed neo-conservatives erroneously claim.

Cinco de Mayo is a celebration of a particular heritage of a particular people—Mexicans—which is why it shouldn't be celebrated publicly in this country. Like all national holidays, it glories in the particular—in this battle, on this date, our army defeated their army. Just as "The Star-Spangled Banner" commemorates a particular and real, though fairly obscure, event—the defense of Fort McHenry against the British in the War of 1812—so every nation and people celebrates its own identity in its own way.

Yet that rather obvious lesson seems to be lost on Mr. Bush, who not only spouted off about Cinco de Mayo in a statement praising the "vibrant culture" of the Mexicans who have invited themselves here and "enriched our society and contributed to the diversity that makes our nation strong" but also, a few days earlier, proclaimed May 1 to be "Loyalty Day."

"Loyalty Day" is not new and has been proclaimed for at least the last two years as well, but I confess I'd never heard of it until now. For me as with most other Americans, every day is Loyalty Day, but then, given mass immigration and political leaders who see nothing wrong in dragging this country into war on behalf of other countries, maybe there's a need for it.

In any case, Mr. Bush appears to have quite missed the point of what he proclaimed.

"To be an American is not a matter of blood or birth," the First Citizen gushed. "Our citizens are bound by ideals that represent the hope of all mankind.¦ On Loyalty Day, we reaffirm our allegiance to our country and resolve to uphold the vision of our Forefathers." Well, not quite.

"Our Forefathers," meaning the white guys who actually fought the War for Independence and wrote the defining political documents of the nation, did not believe they were, should be or could be a "universal nation." John Jay in Federalist No. 2 wrote of the "one united people, a people descended from the same ancestors, speaking the same language, professing the same religion, attached to the same principles of government, very similar in their manners and customs," without whom a common, let alone a free, government could not have existed.

No one then thought that Asians, Arabs, Africans or even most Europeans were capable of stable and free republican government.

There was no evidence for it then, and there's none now.

What they were creating in the 1780s and '90s in this country was anything but universal.

As for being an American, of course it's a matter of blood and birth. If it were merely the watery abstractions the president invokes, the nation itself would be meaningless. In so far as those ideals do inform our nationhood, they are meaningless apart from the particularities of place, race and culture that give them meaning.

That's why in places like North Korea and Iraq they remain meaningless.

There is no reason why real Americans should pay any attention to Cinco de Mayo or indeed to the silly "Loyalty Day" Mr. Bush is peddling.

Remembering who we as a people and a nation really are and how we really came to be ought to give us enough reasons to celebrate and remain loyal without adopting somebody else's holidays - and making up others that no one even knows exist.