Every Breath She Takes 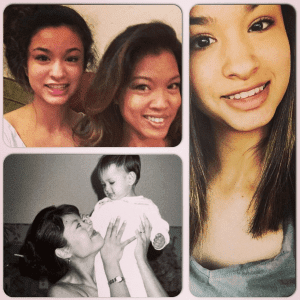 Fifteen years ago this week, my beautiful daughter Veronica entered the world. She didn’t make a sound. As I stretched out my arms to hold her in the delivery room, furrow-browed doctors and nurses instead whisked her away. I shouted after them in panic:

Slightly underweight and jaundiced, she remained in the hospital for several days before we got the all-clear. My husband and I counted our blessings. But it wouldn’t be the last time we felt the pangs of parental helplessness when it came to her health.

Here’s the good news: In the blink of an eye, our shy, clingy little girl blossomed into a wry, wisecracking and independent young lady. She loves to go fishing, hates shallow people, solves a Rubik’s Cube in 35 seconds, prefers true-crime novels to “Twilight” schlock and recently developed a thing for ice hockey players. Veronica’s a wicked Photoshopper, a talented drawer, a makeup artist and (unlike mom) a math whiz. Until six weeks ago, her main obsessions were “Grey’s Anatomy,” the Stanley Cup, Instagram, her new cartilage piercing, an actor named Evan Peters and the hope of getting a learner’s permit.

Just before Mother’s Day weekend, however, she started having what appeared to be respiratory trouble. She “couldn’t get a good breath” and began gently gasping and sighing for air every few minutes. Two trips to the ER later, she had been administered ibuprofen for “costochondritis” and then albuterol to open up her airways.

The problem is that all the various tests and exams indicate she’s getting plenty of oxygen. Her lungs, heart and vocal cords are all “normal,” and yet she describes a chronic feeling that she’s “drowning.” Every day begins with gasping beyond her control, multiple times a minute, nonstop, every hour of every day, until she reaches a point of exhaustion at 1 or 2 in the morning.

After a brief respite while sleeping, the day-mare starts all over again.

Despite taking an alphabet soup of potent neuro-related meds for tics and Tourette’s, Veronica’s condition has steadily deteriorated. The force and frequency of the gasping — now with loud stridor on both the inhale and exhale — keep her in bed most of the day. She has choked on food and drink several times; aspiration is a constant risk.

It has been agonizing to watch her suffer while waiting weeks and months on end to see an increasingly short supply of specialists. It is more agonizing knowing that, despite obtaining the best care possible for her, we still don’t really know what’s going on. “Dr. Google,” though much maligned, has helped connect us to compassionate patient advocacy groups and websites for other perplexed parents with children suffering chronic mystery ailments. The awareness of not being alone is profoundly comforting. But we don’t know how long the winding trail of diagnoses and trial-and-error prescriptions will go on.

On her birthday week, I’m overwhelmed at the strength and grace that my fierce first-born child has shown. My husband and I named her after St. Veronica, a woman who displayed great courage in the face of adversity when she stepped forward from a jeering mob to comfort Jesus on the road to Calvary. Over the past month and a half, our teenage daughter has shown more resilience worthy of her namesake than I have witnessed in most adults. She is my hero.

Through it all, Veronica has not cried or raged or lost her will. Not once. I confess that I can’t say the same, though I put on a good game face for work and public functions. With every labored breath she takes, every minute, every hour of the day, the same waking, aching thoughts echo without relief or resolution: