Eric Cantor Must Be Really Afraid—He’s Using the Word “Amnesty” Again, And Lying About Opposing It! 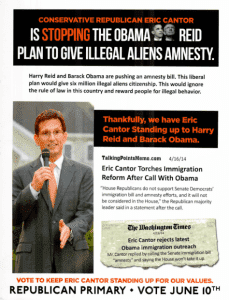 This just in: House Majority Leader Eric Cantor has $1.5 million in the bank compared to his primary challenger David Brat’s measly $84,000. [Eric Cantor Brings in Bucks for Primary Challenge, By Emily Cahn, Roll Call, May 30, 2014]. Despite this, Cantor is apparently afraid enough to send out mailers claiming "Conservative Republican Eric Cantor Is Stopping the Obama Reid Plan to Give Illegal Aliens Amnesty."

Brat, an economics professor who has never held elected office, is making immigration the central issue in his campaign. He commented: “Eric Cantor saying he opposes Amnesty is like Barack Obama saying he opposes Obamacare.” For good measure, Bratt noted that Cantor’s stance is due to his support from corporate donors and added: “Eric Cantor does not represent his constituents. He represents large corporations that want more cheap labor.” Dave Brat: Eric Cantor is pro-amnesty, Augusta Free Press, May 28, 2014.

Eric Cantor responded though his strategist Ray Allen, who said “In the real world, we all know that the system is broken and what Eric has said is he is not for these blanket amnesty plans. He has also said we should be able to reach a consensus on some of these other issues: border security, e-Verify, and what we do about children. That's called leadership." [Eric Cantor Wants You to Know He Stopped Plan 'to Give Illegal Aliens Amnesty', By Elahe Izadi, National Journal, May 28, 2014]

In a sense, Cantor mouthpiece Allen is correct. Under Cantor and Boehner’s “leadership” that House has not passed the Senate bill, what Cantor now calls the “Reid-Obama Amnesty.” Instead Cantor supports his own Amnesty.

Allen’s comment “What we can do about children” refers to the KIDS Act, the GOP version of the DREAM Act, which Cantor crafted. Not all illegal aliens were brought here as children—so I guess that is not a “blanket Amnesty.” But Cantor has supported giving legal status to the vast majority of illegal aliens. Perhaps he would call it a “duvet Amnesty.”

In Politics and the English Language, George Orwell wrote:

“The great enemy of clear language is insincerity. When there is a gap between one’s real and one’s declared aims, one turns as it were instinctively to long words and exhausted idioms, like a cuttlefish spurting out ink.”

Thus, earlier this year, Cantor signed on to the GOP Leadership’s notorious “Standards for Immigration Reform.” January 30, 2014. In addition to promoting citizenship for illegal alien minors and increases in legal immigration, the “Standards” address “Individuals Living Outside the Rule of Law.”

Replacing “illegal aliens”—as Cantor still calls them when trying to appeal to his Virginia constituents—with “Individuals Living Outside the Rule of Law” would make Orwell proud.

According to Cantor and the other House GOP Leaders: “Our national and economic security depend on requiring people who are living and working here illegally to come forward and get right with the law.” The principles give the usual specious qualifications—pay a fine, learn English (and civics!), pay taxes, go to the back of the line without a special pathway to citizenship (though the increases in legal immigration eliminate the line altogether) blah blah. The standards even made it clear this would not apply to “sex offenders” and “gang members.” That’s nice to know!

Responding to the suggestion that this was an Amnesty, John Boehner claimed “If you come in and plead guilty and pay a fine, that's not Amnesty.” [Boehner: Immigration Principles Not ‘Amnesty’, By Steven Dennis, RollCall.com, March 3, 2014]

I assume most VDARE.com readers do not need me to tell them why this is all hogwash. However, it’s worth noting that with the exclusion of the civics lessons and the slightly longer wait before the non-DREAMers gets citizenship, the Cantor/Boehner immigration principles and rhetoric are almost identical to Barack Obama’s.

Indeed, just a decade ago, even John Kerry stated:

“I supported and was prepared to vote for Amnesty from 1986. And it is essential to have immigration reform. Anyone who has been in this country for five or six years, who's paid their taxes, who has stayed out of trouble, ought to be able to translate into an American citizenship.”

In 2006 and 2007 Americans overwhelmingly opposed the Amnesty/Surge immigration bills. So its proponents simply dropped the term and began to use to use Orwellian “exhausted idioms” like “comprehensive immigration reform” and “fixing our broken immigration system” to describe the exact same policies that they called Amnesty just a few years earlier.

Of course, President Obama now eschews the A-word as well. When he enacted his unconstitutional DACA executive order, he stated it’s “not Amnesty.” Like Cantor, Obama says we have a “broken immigration system” has also used the same false polarity between a “Blanket Amnesty” and “mass deportations,” stating in 2010 “Now, if the majority of Americans are skeptical of a blanket Amnesty, they are also skeptical that it is possible to round up and deport 11 million people.”[ Remarks by the President on Comprehensive Immigration Reform, July 1, 2014.]

Just like Boehner, Obama says when illegals “pay their taxes, pay a fine, and learn English” it is not an Amnesty.

The normally dependable Daily Caller has just defended Cantor by pointing to a variety of skewed polls that purport to show that “while conservatives are opposed to the word ‘Amnesty,’ they recognize the need for changes in the current system that most consider broken.” [Polls: Republicans Don’t Want ‘Amnesty,’ But Don’t Mind Citizenship, By Giuseppe Macri, May 29, 2014. ]For example, Macri points to a Fox Poll that shows that Republicans would support a bill “allowing illegal immigrants to stay if they ‘pay penalties, pay back taxes, pass a criminal background check, and learn English and American civics,” along with the implementation of new border security measures.

George Gallup once said, “When a president or any other leader pays attention to poll results, he is, in effect, paying attention to the views of the people. Any other interpretation is nonsense.” [The Sophisticated Poll Watcher's Guide, 1972] This may have been true in Gallup’s day, but as the weaseling by Cantor, Boehner, and Obama show, polls are now not used to gauge public opinion, but to smuggle past the electorate otherwise unpopular ideas.

I would normally respond to this nonsense by pointing to more objective polls that accurately describe both comprehensive immigration reform and the immigration patriot position without using the word “Amnesty.” Voters still prefer enforcement.

However, this is unnecessary. Cantor’s campaign crew have shown that they do not believe their own propaganda. If Republican voters seriously supported “a path to legalization” and the “KIDS Act,” Cantor would have advertised his support of these positions, with all his qualifications about civics classes and no child molesters.

Yet when Cantor tries to communicate to his voters, he knows that even the big words and exhaustive idioms like “comprehensive immigration reform” and “broken system” won’t wash. He just falls back on “Amnesty” and “illegal aliens”—and flat-out lies about his record.

“Washington Watcher” [email him] is an anonymous source Inside The Beltway