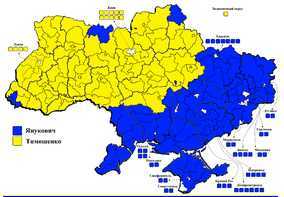 Viktor Yanukovych's victory in the February 7 Ukrainian presidential elections is the final nail in the coffin of the color-coded revolutions so beloved by the Western foreign policy establishment. Seems like the West's Orange fever is slowly ebbing out and a more realistic assessment of Ukrainian politics is setting in.

Which is a good thing. America and other Western countries should study Ukraine's situation to learn what ethnic, linguistic, and cultural fragmentation (a.k.a. "diversity") does to a society—and why it should not be imported.

Even the Eurocrats of the OSCE accepted the verdict and characterized the elections as "open" and fair. The Orange coalition of the defeated President Viktor Yushchenko and Prime Minister Yulia Tymoshenko was politically bankrupt. Yushchenko finished with a popularity rating of about 10%.

The reason for Ukraine's split into the Orange (Yushchenko/ Tymoshenko) and Blue (Yanukovych supporters) camps is not ideological. Ukraine is deeply fragmented along ethno-cultural, linguistic, and economic lines.[In Wikipedia's map, the Orange Party is colored yellow] 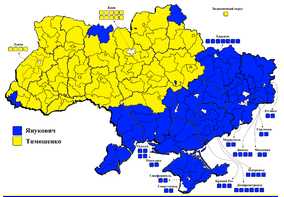 All of these areas are very distinct from one another. The difference is especially stark between West Ukraine and the Crimea.

Western Ukraine, especially the area around Lviv, is the Yushchenko/Tymoshenko Orange heartland.

This part of Ukraine was part of the Austrian-ruled Kingdom of Galicia and then Poland, joining with the other parts of Ukraine only after World War II. Almost everybody there speaks Ukrainian as their native language and non-Ukrainians are few in number.

West Ukrainians are either Uniate (Greek Catholic) or Ukrainian Orthodox with pockets of Baptists and other small Protestant congregations. In contrast, East Ukrainians are also Orthodox but part of the Moscow Patriarchate. The West is rural and parochial. There is little industry and wages in Galicia and Volhynia are a fraction of industrial East Ukraine's. Thousands of West Ukrainians travel to Poland and the Czech Republic to work.

West Ukraine has been the source of strident and often bloody nationalism and ethnic strife. During World War II, Ukrainian nationalists from the OUN and UPA organizations collaborated with the Nazis and massacred Jews and Poles. The leadership of these organizations and most of the members came from Galicia and had previously engaged in anti-Polish terrorism. A Ukrainian SS division and two Ukrainian Wehrmacht battalions were established by Hitler: SS-Galizien, Nachtigall, and Roland. Ukrainian nationalists, including members of the Nachtigall, massacred tens of thousands of Jews, Poles, and Ukrainians suspected of pro-Soviet sympathies in Lviv and other towns and villages in Ukraine.

Oftentimes, the Jews in Ukrainian villages were murdered by Ukrainian nationalists even before the Nazi Einsatzgruppen arrived. (My great-great-grandmother was murdered by Ukrainian collaborationists in Volhynia). The Nazis themselves were horrified at the barbaric cruelty and the insubordination of their Galician cohorts. In the later part of the World War II, Ukrainian nationalists massacred as many as three hundred thousand Polish civilians in Western Ukraine in a mostly successful attempt to make West Ukraine ethnically homogenous.

Yushchenko and Tymoshenko draw a large part of their support from the ideological heirs of the OUN and UPA. The commander of the Nachtigall, Roman Shukhevych, was posthumously given Ukraine's highest honor in 2007.  The graves of the OUN and UPA commanders are favorite pilgrimage spots for West Ukrainian politicians. Anti-Semitism and Russophobia became integral parts of West Ukrainian life and popular culture, from skinhead demonstrations to anti-Semitic and Russophobic menus and signs in restaurants and cafes.

While Yushchenko and Tymoshenko prefer to portray the more moderate nationalists from Kiev and Central Ukraine as their power base, their strength comes from the OUN/UPA crowd. However, Yushchenko and Tymoshenko succeeded in fooling the European and American foreign policy establishment by portraying themselves as paladins of Western democracy and tolerance. What a British journalist described as the "druggy skinheads from Lviv" were conveniently tucked away from the cameras of Western media.

Compared to West Ukraine, the Crimean Peninsula is simply another country. There is nothing integrally Ukrainian about it. Historically, the Crimea was Turkic (Crimean Tatar), Pontic Greek, and Jewish (Krymchaks and Karaim). After the Russian Empire destroyed the Crimean Tatar Khanate, a slave market and raiding base for the Ottoman Empire, the Crimea became overwhelmingly Russian. The Crimea's pleasant climate made it a favored holiday destination for the Russian and later, Soviet public. Until the 1950s, Crimea was part of Russia.

But in 1954, Khrushchev gave the Crimea to Ukraine, in one of the worst instances of modern "nation-building". Even under Ukrainian rule, the Crimea remained overwhelmingly Russian. The main Soviet naval base at Sevastopol further contributed to Crimea's place in the Russian sphere of influence.

When the Soviet Union broke up, 93 % of Crimeans voted to be an autonomous part of Russia. But the government of newly-independent Ukraine ignored the referendum, setting in motion a ticking time bomb.

Crimea was never Ukrainian and if the current demographic trends continue or stay the same, never will be. Also, Russia will never give up its main naval base at Sevastopol.

Instead of clamoring for the Crimea's forcible Ukrainization, which will result in bloodshed, Ukrainian nationalists should either grant it far-reaching autonomy to diffuse the tension or let Crimeans have a referendum on remaining in Ukraine.

Unfortunately, the Orange camp and its allies in the West do not realize that a war between Russia and Ukraine over Crimea will be much more bloody than the one in South Ossetia and will lead to the breakup of Ukraine.

Yanukovych's power comes from the East Ukrainian industrial, coal rich regions. While the people there are ethnically Ukrainian, their cultural and linguistic identity is primarily Russian. The Russian language is widely spoken there—Yanukovych speaks better Russian than Ukrainian—and Russo-Ukrainian tension is very rare. For hundreds of years, East Ukrainians lived and intermarried with Russians and see their country's future as an alliance with Russia (both Khrushchev and Brezhnev were eastern Ukrainians).

However, unlike Crimeans, East Ukrainians do not consider themselves Russian. Most importantly, East Ukraine has a much healthier economy than the rural Western Ukraine. Yanukovych proved himself as an able manager when he was governor of the Donetsk region.

Ukraine is heavily dependent on Russia for oil and gas. Therefore, Yanukovych's pro-Russian policies are not sycophantic, but realistic. Without Russian oil and gas, the already withered Ukrainian economy will collapse.

While making pro-Yushchenko noises, the EU did not seem to be in a hurry to help Ukraine financially. Therefore Ukraine has to look to the East.

Yanukovych also wants to decentralize Ukraine and give more power to the various regions. This will reduce tensions between the Orange and Blue regions of the country and will allow for more effective administration.

It's time for the West to realize that Ukraine belongs in Russia's sphere of influence. Ukraine is closest to Russia ethnically, religiously, and culturally. By electing Yanukovych for the second time, Ukraine gave a clear signal it wishes to maintain close relations with its eastern relatives—not chase an EU/ NATO mirage.

Above all, the West must realize the dangers of ethno-cultural fragmentation and artificial nation-building by looking at Ukraine's sad example. A coal miner from East Ukrainian Donetsk and a Uniate priest from Lviv live in different countries. They worship in different churches, commemorate different heroes, and have different histories.

What is being imported into America is even more divergent.

Eugene Girin [email him] immigrated legally from the Republic of Moldova in 1994 at the age of 10. He has been published by VDARE.COM, Front Page Magazine, and other websites.