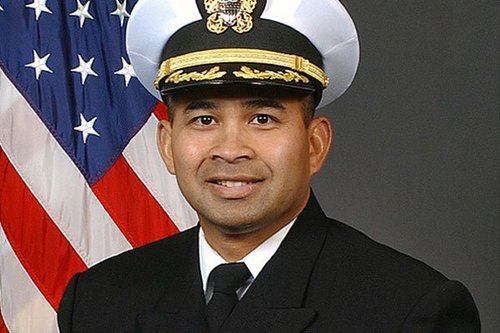 In what the Washington Post called the biggest bribery case “the Navy has confronted in years,” the skipper of a naval cruiser and a senior logistics officer allegedly gave classified information to a contractor regarding ship movements, in exchange for prostitutes, tickets to Lady Gaga concerts (!!!), and cash. The information, which imperiled national security, was allegedly used by the contractor to defraud the Navy (i.e., the white American net tax base) out of millions of dollars.

No information has been provided about their “diversity” status

The background: it is simply a fact is that the U.S. Navy now systematically discriminates against qualified white Americans in favor of politically protected non-whites.  As Admiral Mike Mullen put it during his tenure as chief of naval operations, “diversity” is a “‘strategic imperative.’”  [The Potemkin Color Guard goes mainstream, CDR Salamander Blog, November 10, 2009.]

Midshipmen are admitted by two tracks. White applicants… typically need grades of A and B and minimum SAT scores of 600 on each part for the Board to vote them ‘qualified.’  Athletics and leadership also count.

Not so for an applicant who self-identifies as one of the minorities… SAT scores to the mid-500s with quite a few Cs in classes (and no visible athletics or leadership) typically produce a vote of ‘qualified’…with direct admission to Annapolis.

Minority applicants with scores and grades down to the 300s with Cs and Ds… after a remedial year at our taxpayer-supported remedial school, the Naval Academy Preparatory School.…in theory they have to get a C average at NAPS to come to USNA, but this is regularly re-negotiated. [N.S.: “Re-negotiated” = waived.]

Once at Annapolis, ‘diverse’ midshipmen are over-represented in our pre-college [remedial] classes, in lower-track courses, in mandatory tutoring programs and less challenging majors. Many struggle to master basic concepts…”

Fleming’s report meant there is massive, institutional cheating on “diversity” middies’ behalf in terms of grade inflation or else they would all flunk out.  These standards are even lower than those of the NCAA:

[NCAA's Clearinghouse Rules - Who's Looking Out for the Student-Athlete? by Richard Pound, Fastweb, April 21, 2009.]

Needless to say, the Academy brass responded to Fleming’s revelations by lying:

“‘This class we inducted yesterday may be the most talented overall that we have ever brought into the Naval Academy,’ said William Miller, academic dean and provost of the academy. ‘We have increased the standards, rather than dumbing them down.’”

Another equally inevitable result: this decline in academic standards mirrors a decline in moral standards:

[T]he Naval Academy rarely dismisses anyone for lying, cheating or stealing, according to thousands of pages of documents obtained by concerned graduates under the federal Freedom of Information Act….

… some mids have been allowed to violate honor standards multiple times without being separated.

‘What got me was the conspiracies to commit honor violations,’ said Curt C. Hartman, a 1987 Naval Academy graduate…  “The academy today focuses on ‘equivocation, remediation, rationalization.’”

Lest we forget: all of this is a remarkable deterioration in public probity since 1972, when blacks rioted aboard the aircraft carriers U.S.S. Kitty Hawk and U.S.S. Constellation. A Congressional investigation was then remarkably forthright, criticizing a dangerous condition of “permissiveness” in the Navy:

1. [T]he riot on Kitty Hawk consisted of unprovoked assaults by a very few men, most of whom were below-average mental capacity, most of whom had been aboard for less than one year, and all of whom were black. This group, as a whole, acted as "thugs" which raises doubt as to whether they should ever have been accepted into military service in the first place.

2. The subcommittee expresses its strong objection to the procedures utilized by higher authority to negotiate with Constellation's dissidents and, eventually, to appease them by acquiescing to their demands… Moreover, the subcommittee stresses that the actions committed aboard that ship have the potential for crippling a combatant vessel in a war zone…. [Emphasis by N.S.]

The change [to laxity in discipline], in part, has been occasioned by the use of minority affairs representatives, human relations councils and human resources staffs which too frequently bypass the chain of command…

…The leaders of our Nation must make a critical decision-shall we tolerate a continued decline in naval discipline, or shall we adhere to traditional concepts of military discipline tempered with humanitarianism?...

The subcommittee believes that the latter option is the only response which will provide an effective fighting force.

This un-PC honest language would be unthinkable today.  “Permissiveness” is now far worse, and there now also exists an entrenched, Orwellian “diversity” bureaucracy to impose it—including a “diversity directorate.”  This shadow chain of command has apparently substantially replaced the official, legitimate chain of command for “diverse” servicepersons, who do not have to meet the standards of white Americans.

But, after two generations of peace, today’s Navy is simply the world’s most expensive racial socialist welfare agency.

Absent real change, it will sink when it faces a real crisis—along with the future of the historic American nation.