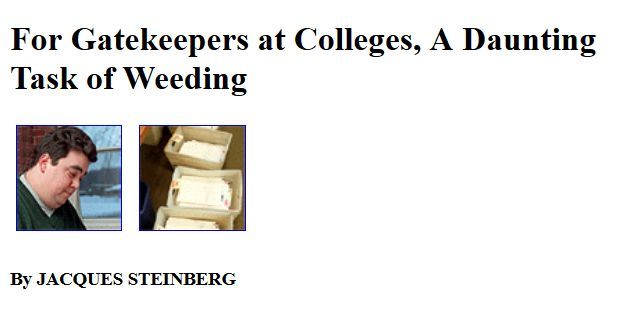 "Though the Californian's SAT scores exceeded the median of those applying to Wesleyan (1,350), and her race [Asian] and West Coast origin were in high demand, Mr. Figueroa finally circled the preliminary recommendation "deny." Among his concerns, he said, was that she had not selected very challenging courses.

The New Yorker [Hispanic], despite scores that ranked her among the bottom of this year's applicants [and a "D" in English], got a tentative "admit." Mr. Figueroa liked the portrait of a scrapper and born leader that emerged from her essay and teacher recommendations. But he conceded that he also saw a grainy reflection of himself — he is the sixth of seven children raised by Mexican-born parents in California — staring back from her manila folder."

What's fascinating in this NY Times account of a Mexican-American admissions officer at Wesleyan U., besides the obvious — the rank Hispanic chauvinism, the desire to be a "social engineer" and the anti-Asian prejudice — is the admissions officers' absolute refusal to look at quantitative feedback on the consequences of their past admissions decisions. Mr. Figueroa has a "gut feeling" that a co-Hispanic with an SAT score two standard deviations below the Wesleyan mean will somehow be a success, while the Asian with the well-above average test score won't. Well, what's his batting average on his past gut feelings? Did the people he admit in the past do better — in terms of gpa, hard majors, graduation rates, professional school acceptances, donations to alumni funds, or whatever — than the other admissions officers? How did Wesleyan's admittees do compared to its rivals? How did past admittees with SAT's 400 points below the mean do compare to past admittees with scores 125 points above the mean?

Next question: why isn't there enough of a competitive marketplace in collegiate education that colleges that permit this kind of shoddy workmanship on the part of their admissions staffs don't get driven into bankruptcy?

Richard Armour's definition of an admissions office — the committee in charging of admitting the university's mistakes.