[VDARE.com note: The "Minority Occupation Government" concept in the title is VDARE.com's contribution—Michelle Malkin is not responsible for it.]

"All cops are bastards!"

On a tranquil Sunday afternoon in Denver, hate-mongering zealots hijacked a rally held by citizens and families of fallen police officers, who had gathered to pay tribute to Colorado's honorable men and women in blue.

The event organizer, local businessman Ron MacLachlan, followed all the rules and obtained a city permit. Democratic Gov. John Hickenlooper signed a proclamation declaring July 19 Law Enforcement Appreciation Day. The idea, MacLachlan explained to local reporters, was to show his teenage children and other young people the myriad positive contributions of those who protect and serve.

The rally was supposed to be a counterbalance to the poisonous post-Ferguson propaganda that has cast all cops as antagonists.

Instead, a mob of anarchists and social justice jerks (who didn't bother obtaining a permit) held another profane seminar on intolerance.

Rally attendee Monica Goodfellow—the wife of a retired Denver Police veteran who served 35 years and the mother of a rookie Denver Police officer—told me the grievance grifters were "marching, screaming their vile chants and waving flags" that bore their well-worn "F**k the police" slogan.

Then they bullied the relatives of police officers killed in the line of duty over a loudspeaker by bellowing:

"Cops are your enemies!"

Keepin' it classy, as always.

"There were families at the rally with young children who had to stand and watch the disgusting scene," Goodfellow added. "There were uniformed (Denver Police Department) officers standing at the perimeter watching, and (they) did nothing to stop the protesters or move them to another area so we could hold our rally without harassment."

Were the cops ordered to stand down by Denver's liberal city leaders? It wouldn't be the first time.

Back in February, rank-and-file officers and their families erupted in fury after DPD's top brass forbade their own men and women in uniform from stopping two thugs who brazenly defaced a hallowed memorial for fallen officers. 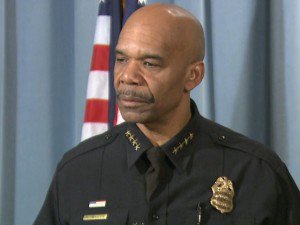 Both the Fraternal Order of Police and the Denver Police Protective Association called for the resignations of Denver Police Chief Robert White (right) and city director of public safety Stephanie O'Malley. The FOP reported that officers "were forced to watch as the vandals poured red paint on the memorial to fallen officers, spray-painted obscene slogans in the plaza and pasted stickers with a death threat for one officer."

The mobsters ripped down the American flag flying over the memorial and then spat and stomped on it.

Several patriotic officers who sought to replace the desecrated flag (including one cop who had served in the Marines) were reprimanded and interrogated by command staff for doing so, according to the FOP.

The animosity toward cops in the bowels of liberal Denver's political bureaucracy runs deep. In a revealing moment of social media candor uncovered this spring by local TV station CBS 4, the daughter of the city's deputy manager of safety exposed the hostility. Elena Vigil bragged online that her father, Jess, is a "former Chicano rights activist and hater of police" who "obviously hates his job because he has to follow the rules and they're always skewed towards cops." 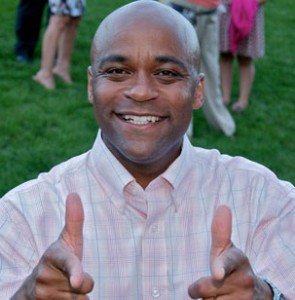 Denials abounded. Rank-and-file protests against the city's anti-law enforcement bias were met with ... nothing. Hickenlooper and Democratic Denver Mayor Michael Hancock [Pictured right] AWOL. This week, politically correct White shook up his department and demoted several commanders for unknown reasons "to take us to the next level as a police agency." Whatever that means.

Bottom line: He's still in top office after the stand-down fiasco, which sent a clear signal to Denver's social justice jerks that they are the ones in charge.

For the men and women in blue in Colorado's capital city, Goodfellow wants the nation to know: "The city of Denver is a disgusting, intolerant place."