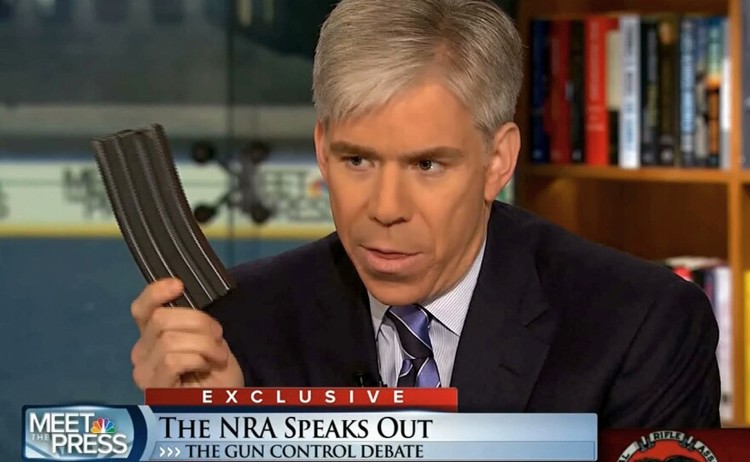 I've always thought entrenched left-wing journalists in Washington needed their heads examined. Much to my satisfaction, it appears the corporate media bosses of at least one Beltway anchor now agree.

According to The Washington Post this week, NBC News hired a "psychological consultant" to examine why flailing "Meet the Press" moderator David Gregory has been bombing in the ratings. The overpriced shrinks (NBC prefers the euphemism "brand consultants") came from the New York-based brand fixer-upper Elastic Strategy.

They interviewed Gregory's wife. They interrogated his friends. They crunched their numbers. They compiled their reports. And after all that, the "experts" are still scratching their noggins:

What's the matter with David Gregory? And why don't people like to watch him?

I could have saved the honchos at NBC News a lot of time and trouble. The first answer is: David Gregory is a phony. The second answer is: He's a jerk.

And no amount of brand therapy and rehabilitation consulting can fix him.

Gregory's predecessor, Tim Russert, was highly respected on both sides of the political aisle. The former chief of staff for iconoclastic U.S. Sen. Daniel Patrick Moynihan turned "Meet the Press" into mandatory viewing for any American serious about politics and policy. Yes, he was liberal. But he never pretended to be anything he wasn't. He did his homework. He didn't pull punches. He helped enlighten the nation about our entitlement crisis. He conducted interviews, not one-sided partisan lectures.

Russert was also a decent man, as so many warm eulogies across the ideological divide attested. I had a chance to meet him a few times as an intern in the videotape library of the Washington political unit at NBC News in 1992. He was always friendly and engaging. (Andrea Mitchell was a whole 'nother story. Gah.) Before I left to work for the Los Angeles Daily News, I drafted a little memo on suggestions to improve data collection and entry. I never expected acknowledgment. But Russert took the time to respond and thank me. A lowly intern. I never forgot that.

Gregory is the anti-Russert. His boorish behavior around D.C. is legendary—from his juvenile tantrums with the Bush press staff to his drunken radio appearances to his diva snit fits with innocent bystanders while filming news segments. One of the most telling and notorious anecdotes involves Russert himself, who reportedly reprimanded Gregory in 2008 for going ballistic on a poor waitress while the two TV stars dined at a D.C. restaurant. But "Gregory still treats most of ... the newsroom like s**t," an insider told the website Jossip. "Amazing how NBC cares more about food servers than about the people who have to deal with Gregory's arrogance every day."

Since Gregory doesn't have the intellectual heft to carry in-depth interview segments the way Russert did, "Meet the Press" producers have reduced substantive exchanges to a few minutes and larded the rest of the show with fluff and stunts.

Last fall, Gregory the gun-control activist masquerading as a Sunday talk-show journalist made headlines with his brazen hectoring of NRA CEO Wayne LaPierre—while illegally brandishing a 30-round ammunition magazine on national television. He has used the show to fawn over vulgar, misogynistic "comedian" Bill Maher and to repeatedly browbeat Timothy Dolan, the archbishop of New York, over gay marriage.

As I've noted many times over 20-plus years in this business, the problem isn't bias. It's the pretense of non-bias. Gregory and his peers suffer from cognitive dissonant hack syndrome, a common affliction among incurable left-wing journalists who sanctimoniously pay lip service every day to neutrality and objectivity, while brazenly using their platforms to promote partisan political narratives.

Desperate NBC suits in denial tried to get Gregory to immerse himself more in social media to appeal to "younger viewers." But he detests the hoi polloi and refuses to respond to critics. You don't have to be a high-priced brand guru to know that for social media engagement to work, it requires an engaging personality to actually, you know, engage.

Another NBC muckety-muck gave his expert analysis on the network's David Gregory Problem: "You need to be who you are. We're trying to look at who David is."

Well, there's the rub, isn't it? Gregory, like many of his ilk, is a thin-skinned elite who lives in the Beltway bubble and can barely contain his contempt for his audience. With rare exceptions, the supposed watchdogs of Washington journalism are lapdogs for the establishment with "Don't You Know Who I Am?" egos as big as the politicians they sidle up to every weekend.

To the chagrin of NBC and its brand EMTs, Americans have discovered an effective cure: the "off" button on their remotes.