It’s pretty unusual that five candidates in six-person debate feel obliged to gang up the one who is actually running sixth. For David Duke, that’s a sign of both weakness and strength. 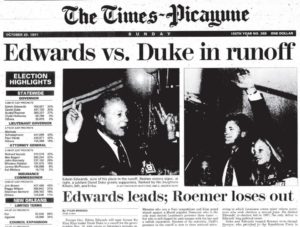 In 1990, Duke shocked the political establishment by winning 43% of the vote in the first round of voting in that year’s U.S. Senate race, effectively displacing all the other Republicans. Louisiana has a “Jungle Primary,” whereby all candidates in both parties compete directly against each other in a single first-round election, with a run-off if no candidate gets an absolute majority. Democrat Bennett Johnson received over 50% and thus avoided a runoff. But the next year Duke received more votes than incumbent Republican Governor Buddy Roemer in the first round of voting, putting him in a runoff against Edwin Edwards (who won but was subsequently jailed for corruption, to absolutely no-one’s surprise).

Duke does not appear prepped to repeat these results. He barely made the cut off for the debate by polling sixth place at 5.1% in a Mason Dixon poll. [John Kennedy, Foster Campbell lead in poll used for next debate invites, by Tyler Bridges, Baton Rouge Advocate, October 20, 2016] A University of New Orleans poll found him doing even worse, polling at seventh place at just 2%. [The 2016 Senate and Presidential Elections in Louisiana (PDF), October 22, 2016]

These polls could be off for a variety of reasons:

While all these could very well affect the outcome, I would be shocked if it is enough to make him receive a double digit vote share. However, based on the media and the Clinton campaign, you would think that Duke was a major political force.

Of course, the news is not Duke’s Senate run, but his support of Trump. Duke has been eager to tie himself to Trump. He brags about having used the America First slogan before Trump, cites Trump’s rise as his inspiration for running and claims their fates are tied. [Can David Duke Reach the Senate on Trump's Coattails, by Stephanie Grace, Newsweek, October 16, 2016]

But it’s important to note that Duke is not really riding Trump’s coattails. The aforementioned University of New Orleans poll shows that David Duke gets exactly equal support among Trump voters and Clinton voters. (Amazingly, Duke also gets 17% of Jill Stein voters, though that could be due to the very small sample size).

Beyond that, Trump has repeatedly disavowed Duke’s support. As Mike Pence said "Donald Trump and I have denounced David Duke repeatedly. We have said that we do not want his support and we don't want the support of people who think like him." However, he declined to call him “Deplorable” because, he was not “in the business of name calling.”

If you won’t say the KKK is deplorable, you have no business running the country. https://t.co/mFut8Qrz9A

This is, of course, nonsense. Duke has not been in the Klan for 36 years. As much as I dislike the “Democrats are the Real Racists” arguments, it’s notable that Duke is far more removed from the Klan than Robert Byrd or Hugo Black were at the peak of their political careers.(Democratic Senator Byrd was a Klansman in 1946, a Democratic Congressman in 1953, a Senator in 1959, and stayed a Senator until 2010. )

Duke is also further removed from the Klan than Bill Ayers was from the Weather Underground in 2008. While Barack Obama’s political career began in Ayers living room, Duke’s endorsement of Trump is the extent of any connection.

The great libertarian economist Murray Rothbard explained the hypocrisy of anti-Duke hysteria after his 1991 gubernatorial run:

They said in the 60s, when they gently chided the violent left: "stop using violence, work within the system." And sure enough it worked, as the former New Left now leads the respectable intellectual classes. So why wasn't the Establishment willing to forgive and forget when a right-wing radical like David Duke stopped advocating violence, took off the Klan robes, and started working within the system? If it was OK to be a Commie, or a Weatherman, or whatever in your wild youth, why isn't it OK to have been Klansmen?

Indeed, even this comparison does not fully expose the current double standard. There has never been one single “Ku Klux Klan.” As Ron Unz noted, the Main Stream Media greatly exaggerates the actual violence from modern Klan chapters—and Duke’s organization, the Knights of the Ku Klux Klan, was never accused of any violence or law breaking. It actually attempted to moderate the views and style of the old Klan [The KKK and Mass Racial Killings, Unz.com, September 19, 2016]. Duke’s involvement of the Klan would be akin to someone creating his own Black Panther chapter which eschewed violence and tried to advocate for legal reforms but gave it up because he could not shake the associations people had with the name.

One can question Duke’s prudence in attaching himself to a name with such historical baggage. But there were never any peaceful Weather Underground wings—and Bill Ayers was personally involved in terrorism.

At the same time, the fact is that, if it were it not for Duke’s long-ago involvement in the Klan, no one would care about him in the first place. It gave him notoriety and name recognition that enabled a first term state Rep to almost get elected to US Senate. And people still remember him more than any other losing gubernatorial or Senate candidate from 25 years ago. Today, there’s no way that a candidate with low single digits in a Senate election would get so much attention.

So what should we make of Duke’s run? To the extent that voters are willing to ignore the apoplectic smears and vote for him, it certainly shows extreme resistance to the MSM’s and political establishment’s attempt to silence dissidents.

Paradoxically, Duke has thrived almost entirely because of his association with the Klan—and now because of the fact that the MSM wants to smear Trump by associating him with Duke. But also, unlike virtually every other figure even loosely connected with the Alt Right, Duke has explicitly tried to associate himself with Trump. Duke’s campaign manager went as far as saying “Their fates are linked together.” [David Duke, leading 'deplorable' and Senate candidate, sees Trump as kindred spirit, by Todd Gillman, Dallas Morning News, September 22, 2016]

This is simply not the case. Both Trump and the movement he has inspired will manage with or without David Duke.

Article
Patrick J. Buchanan: Has The Backlash Arrived For Police-Bashing?

Post
Colorado Springs Mass Murder: Hispanic Victims, But Is It An IMMIGRANT Mass Murder...Or A Black One?
MORE...
POPULAR TAGS