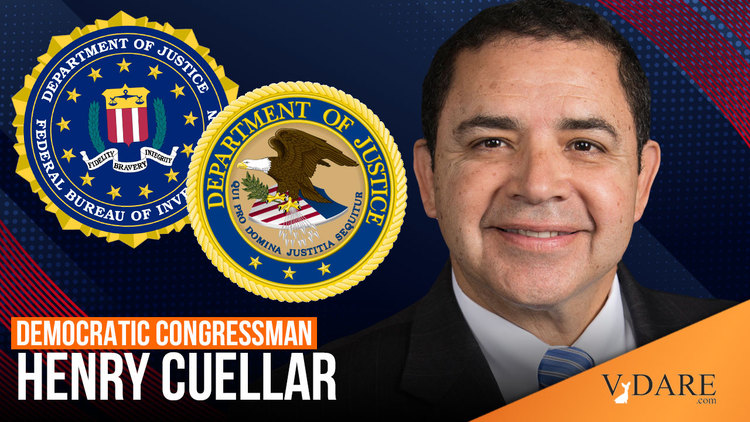 The timing of the raid is curious, indeed virtually unheard of. Cuellar, who has served as a public official since 1987, will be facing primary challenger Jessica Cisneros, touted as “the next AOC” [ Jessica Cisneros Could Be the Next AOC. (But Don’t Tell Her That), by Tim Murphy, Mother Jones, January/February 2020] on March 1st.

The incumbent has centered his campaign around battling the recent illegal immigration surge  and publicly criticizing the Biden Administration’s poor handling of the border crisis in South Texas, including a challenge aimed at embarrassing Vice President Kamala Harris [Texas Democratic Rep. Henry Cuellar says he has MOVED ON from trying to get Kamala Harris' help on the border because she 'doesn't seem interested' and hasn't returned his calls, Daily Mail, December 23, 2021].

On immigration, Blue Dog Cuellar and his opponent Cisneros are night and day. While Cuellar has been a high-profile advocate for action against the illegal aliens, drug traffickers and human smugglers pouring into his district, Cisneros is an actual  immigration attorney backed by the “Squad,” who advocates for Open Borders: Far-Left Targets Pro-Borders Texas Democrat Henry Cuellar For Primary Challenge,  by Becky Noble, Political Insider, August 5, 2021. The Cuellar-Cisneros election is key for the hard Left of the Democratic party, who see the race as a critical step towards turning Texas blue [ 'We flip Texas, we flip the country’ — AOC stumps for Cisneros, Casar, by Sofía Sánchez, Texas Public Radio, February 12, 2022] .

The 28th District is overwhelmingly working class and Mexican-descended, but during the 2020 election it began trending towards Republicans (Biden +4 compared to 2016, where it went Clinton +20) thanks in part to Tejano concerns over illegal immigration. Most Tejanos identify as white and are not receptive to the new Democratic party’s aggressive Identity Politics pandering, let alone Black Lives Matter [ Why Democrats Are Losing Texas Latinos, by Jack Herrera, Texas Monthly, October 2021].

Cuellar has not been charged with any crime and has no way to prove his innocence, but Cisneros and her allies are eagerly capitalizing off the static and intrigue created by the FBI raid [Progressives Are Betting That The Uncertain FBI Activity Around Rep. Henry Cuellar Could Help Push Him Out Of Office, by Lissandra Villa, Buzzfeed, January 21, 2022]. An ad sponsored by the Justice Democrats last week focused on the FBI’s targeting of Cuellar as evidence of his corruption, a template being followed by various other PACs flooding the South Texas airwaves in support of Cisneros.

The Department of Justice has long had guidelines [PDF] banning overt police action against political candidates near an election. But it is flagrantly violating them in this case. Remember that Hillary Clinton, amplified by the press to this day, holds that the FBI disclosure of an investigation into her e-mail server was responsible for her election defeat in 2016 [Hillary Clinton Blames F.B.I. Director for Election Loss, by Amy Chozick, NYT, November 12, 2016].

In the case of Cuellar, a man with 36 years of public service under his belt, the details of what he is even being investigated for have been kept vague.

Federal subpoenas released to ABC News suggest that Cuellar is being scrutinized for ties to Kemal Oksuz, a Turkish lobbyist who sponsored a congressional delegation to Baku, Azerbaijan in 2013. Oksuz was charged by the Department of Justice in 2018 for concealing that SOCAR—the state-run Azerbaijani oil company—paid for the 2013 trip [FBI Raids Home of Texas Rep with Deep Ties to Azerbaijan, Armenian Mirror-Spectator, January 27, 2022.]

A number of prominent Republicans and Democrats attended the trip, including anti-white luminary Sheila Jackson-Lee [Justice Department Issues Indictment for 2013 Congressional Trip to Azerbaijan, by Katherine Tully-McManus, RollCall,  September 24, 2018]. But they have not faced the FBI scrutiny Cuellar has been subjected to, outside of being ordered to return the gifts they received during the Baku meeting.

Cuellar was not publicly identified as having attended the 2013 visit, but he does currently co-chair the Congressional Azerbaijani Caucus. None of the other members of the caucus, which includes the aforementioned Jackson-Lee, MSNBC darling Adam Kinzinger and several others, is being subjected to FBI agent raids.

Foreign lobbies dominate Washington. While Cuellar appears to be enjoying special interest largesse, so do all of his peers. He is being put under the microscope.

Details of Cuellar’s supposed wrongdoing are still pending. But if a high-profile regime critic were being selectively targeted in Russia or Hungary, organizations claiming to defend democracy and human rights would not hesitate to suggest foul play.

In the U.S., however, Republicans have been relatively quiet on the DOJ’s election interference against anti-immigration Democrat Cuellar, who has been irreparably stigmatized by the FBI’s actions although insisting he is innocent and cooperating with law enforcement [U.S. Rep. Henry Cuellar says “no wrongdoing on my part”, by Alex Cano, KGNSTV, January 25, 2022].

Though Republicans have not been competitive in Laredo for decades, petty partisanship appears to be to blame—in spite of the fact that Mother Jones, above, called Cuellar “Trump’s Favorite Democrat.”

As early voting begins in the March 1st primary, Cisneros and her supporters believe victory is closer than ever, thanks to the DOJ and FBI tipping the scales:  Texas primary showdown bursts open after FBI raid,  Politico, by Sarah Ferris and Ally Mutnick, January 25, 2022.