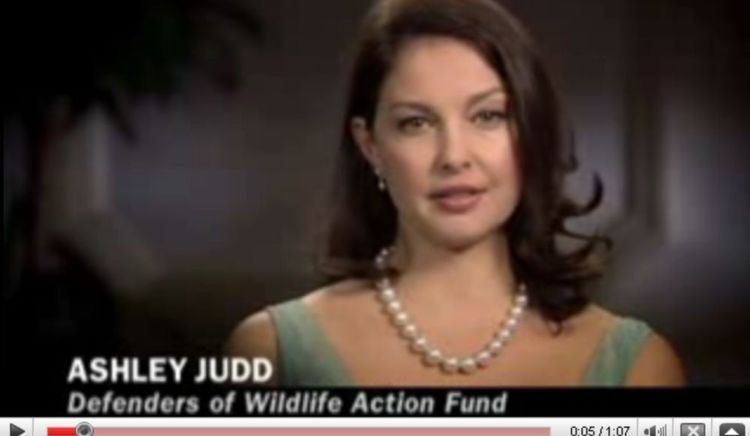 Actress Ashley Judd has finally earned her Hollywood stripes and provided award-winning comic relief. With Washington poised to shove a trillion-dollar "stimulus" pork pie down our throats, we need all the distractions we can get. I give Judd's unintentionally entertaining performance in a new Sarah Palin-bashing animal rights ad two diversionary thumbs up.

The Defenders of Wildlife Action Fund sponsored the YouTube video starring Judd. They've dubbed their campaign, launched this week, "Eye on Palin." With all the serious, socially responsible celebrity earnestness she could muster, Judd decried the aerial hunting of wolves in Alaska, the GOP governor's state. "It is time to stop Sarah Palin and stop this senseless savagery," Judd intoned.

Casting herself as an environmental expert, Judd attacked Palin for "casting aside science and championing the slaughter of wildlife." The video shows a wolf being shot, writhing in pain, with an ominous soundtrack throbbing and menacing photos of Palin flashing across the screen. "Riddled with gunshots, biting at their backs in agony, they die (pause for quiver) a brutal death," Judd enunciates slowly as wolf squeals punctuate the video. Defenders of Wildlife assails Gov. Palin for proposing a $150 bounty for every wolf killed by aerial hunters. She's cruel and bloodthirsty, and she must be stopped!

It's a compelling black-and-white storyline. But like the world Judd inhabits, this plot is make-believe.

Fact is, the policy is intended to protect other animals—moose and caribou—from overpopulation of wolves. Alaskans rely on caribou and moose for food. Not all Americans care to live on environmentally correct starlet diets of tofu salad and Pinkberry yogurt.

Neither Palin nor the aerial hunters in those scary low-flying planes that have Judd quivering promote the program out of malice and animal insensitivity. On the contrary, they are the true compassionate conservationists. The bounty helped state biologists collecting wolf age data and provided incentives to reduce the wolf population when wildlife management efforts had fallen behind. This is about predator control. But to liberal, gun-control zealots thousands of miles away, it's all heartless murder.

Federal law makes specific exceptions to aerial hunting for the protection of "land, water, wildlife, livestock, domesticated animals, human life or crops." Targets are not limited to wolves. And, as Alaska wildlife officials note, the process is tightly controlled and "designed to sustain wolf populations in the future."

No matter. As Judd proclaimed, "It is time to stop Sarah Palin." That is the true aim of left-wing lobbying groups and their allies in Hollywood. Palin is a threat not to Alaska's wolves, but to the liberal establishment's wolves. Defenders of Wildlife isn't targeting the ads in states affected by these policies. They're running the Judd-fronted ads across battleground states. It's about electoral interests, not wildlife interests. The eco-Kabuki theater is just plain laughable.

On a deadly serious note, Judd's selective concern for savagery is not lost on longtime observers of the activist entertainer's political forays. A militant, pro-choice feminist, Judd lashed out at the Republican ticket during the campaign: "[A] woman voting for McCain and Palin is like a chicken voting for Colonel Sanders." Yet, not a peep has been heard from Judd about the serial predators of Planned Parenthood who have been caught on tape urging young girls to cover up statutory rape to facilitate abortion procedures. And she won't be starring in any YouTube ads decrying grisly late-term abortion procedures.

In a starlet's world, "senseless savagery" only applies to the poster pet of the month.