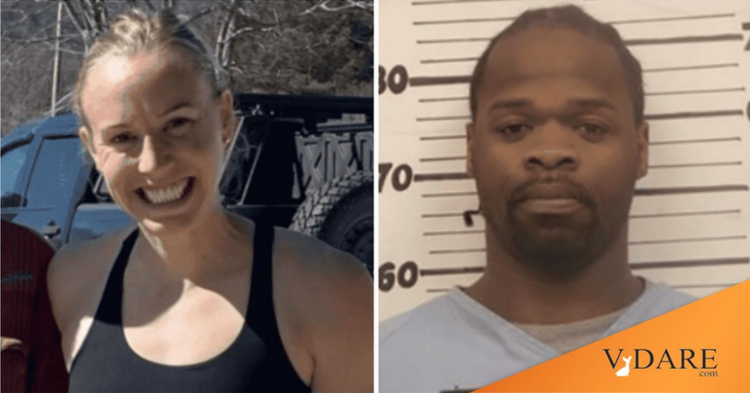 ANN COULTER: Dems—A Killer On Every Block And Two Rapists In Every Backyard

The country is experiencing an historic surge in violent crime, and the link between Democratic policies and the crime wave is more firmly established than the law of gravity.

This week, the Democrats and their auxiliary staff in the media gave less attention to the grisly kidnapping and murder of Eliza Fletcher than they did to two black girls allegedly snubbed by a performer in a Muppet costume a couple of months ago.

Fletcher, a 34-year-old hardware heiress, kindergarten teacher and married mother of two, was out for an early morning run near the University of Memphis campus on Friday when a 38-year-old career criminal, Cleotha Abston, leapt out of his SUV and dragged her, kicking and screaming, into the passenger side of his vehicle.

Based on copious evidence, including video and DNA, police arrested Abston almost immediately. His career highlights include a lengthy juvenile record: theft, aggravated assault, aggravated assault with a weapon and rape—as well as the violent kidnapping of a prominent attorney, whom he drove around in the trunk of his car for hours, looking for ATMs.

But Abston refused to tell police what he had done with Fletcher.

On Tuesday, police announced they’d found her body. Big story, right? MSNBC cut away from the press conference on this abduction-murder about four minutes in. The New York Times put the story on page A-20.

The old media motto “If it bleeds, it leads” has been replaced with “No stories that would make black people—or more to the point, white liberals—feel uncomfortable.” Fletcher, you see, was white, and Abston—well, as the black police officer said to my friend reporting a violent assault, “Black, right?”

Given that Memphis has recently elected a Soros-style Democratic district attorney, the kidnapper will probably be back on the street before the hapless Muppet impersonator is employable again.

But aren’t you glad Democrats have a zillion “crime” proposals that will take guns away from the law-abiding? Just think of what might have happened if we introduced guns into this situation! Under Biden’s “Safer America Plan,” attempted kidnappings will be fought mano a mano: a delicate 130-pound woman vs. a 6-foot, 175-pound man.

Yeah, you can definitely trust Democrats on crime, America.

Democrats enthusiastically supported the 2020 BLM riots that did more than a billion dollars’ worth of damage just in the first two weeks and left at least 25 people dead.

In the midst of this Democrat-encouraged destruction, candidate Biden, ol’ lunch-bucket Joe—the police have never had a truer friend!—took a knee at a BLM protest. You couldn’t get him out of his basement to campaign, but BLM was too important!

His running mate, Kamala Harris—as well as loads of his campaign staff—openly bragged about contributing money to bail out antifa and BLM rioters. Democrats—and only Democrats—supported “Defund the Police!” and actually did manage to defund the police in cities around the country.

As president, nearly a year after George Floyd’s death—giving Biden plenty of time for sober reflection—he issued an official White House statement bemoaning the fact that black people have to fear “interactions with law enforcement,” and blaming the “systemic racism” of the police for “the exhaustion that Black and brown Americans experience every single day.”

They “wake up,” Biden said, “knowing that they can lose their very life...after a grocery store run or just walking down the street or driving their car or playing in the park or just sleeping at home.” (Or after robbing a store, ingesting a massive quantity of fentanyl, then resisting arrest; threatening police with a knife; or standing next to a guy who’s shooting at the police from your hallway.)

Days before the 2020 election, Philadelphia police officers shot a career criminal, Walter Wallace Jr., as he was coming at them with a knife. Bodycam video shows the officers backing up while yelling at Wallace to drop the knife. But he wouldn’t do it. When the cops finally had a clear shot that wouldn’t endanger civilians, they fired. Wallace died. (Don’t believe Wikipedia; watch the video.)

In just the first five days of the ensuing riots, 57 Philadelphia police officers were injured, some seriously, and 19 law enforcement vehicles damaged. (In addition to fighting injustice, the protesters were doing some much-needed shopping: More than 10 miles from the protest site, stores such as Walmart, Lowe’s and Five Below were looted.)

As rocks and bricks rained down on Philly police, candidate Biden tweeted about the beloved Walter Wallace Jr. (prior convictions: robbery, assault, possessing an instrument of crime after kicking down a woman’s door and putting a gun to her head, and another assault charge for punching a police officer in the face):

“Our hearts are broken for the family of Walter Wallace Jr., and for all those suffering the emotional weight of learning about another Black life in America lost. Walter’s life mattered.”

Our hearts are broken for the family of Walter Wallace Jr., and for all those suffering the emotional weight of learning about another Black life in America lost.

We’re still waiting for Biden’s tweet on Eliza Fletcher’s life. He’s probably too busy, ensuring that you won’t be able to get a gun in a country where criminals run amok because we can’t put another “black body” in prison.