When President James Garfield expired in September 1881, several months after being shot by a crazed office-seeker, he was succeeded by Vice President Chester Alan Arthur, a member of New York's notorious Conkling political machine.  Upon hearing the news of Garfield's passing, a friend of Arthur's is said to have said, "My God!  Chet Arthur in the White House!" [The American Political Tradition, 1948 PDF; P. 173]

But in serving until the end of that presidential term, Arthur focused successfully on reform, especially of the civil service, leading a contemporary journalist to write "No man ever entered the Presidency so profoundly and widely distrusted as Chester Alan Arthur, and no one ever retired ... more generally respected, alike by political friend and foe."  (As my high school U.S.-history teacher explained to us, approximately, "From his experience in New York, Chester Arthur knew where the bodies were buried.")

So it was an earlier"Nixon goes to China" episode! 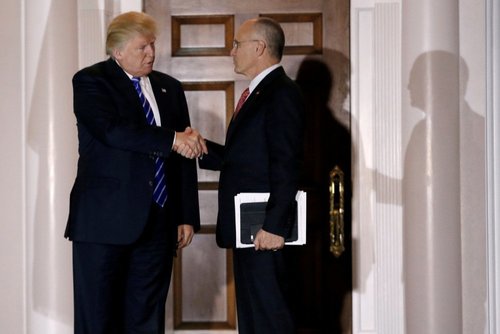 Today, disquiet among immigration patriots over Donald Trump's choice for Secretary of Labor, Andy Puzder, is warranted by Puzder's well-documented history of heavy breathing over amnesty and general immigration-expansionism.  But an author using the pseudonym "sundance," writing at The Last Refuge (aka "The Conservative Treehouse") on December 8 begs to differ.

In Why Donald Trump, and American Workers, Need Andrew Puzder as Secretary of Labor…, sundance argues, in essence, that this is another case of "Nixon goes to China"—as current chief executive at CKE Restaurants (parent company to the Carl's Jr. and Hardee fast-food chains), Puzder has beaucoup experience slugging it out with federal bureaucracies, regarding which here is sundance's core point:

Every entity that hires people is potentially at risk for audit, inspection, or charge from an entity called the EEOC (Equal Employment Opportunity Commission) within their regional jurisdiction.

The EEOC responds to hiring practice complaints from a perspective of ensuring equal employment opportunity. As we’ll show, the rules of the EEOC are in direct contradiction with the Department of Homeland Security ... immigration laws.

When you understand the emphasis of the risk avoidance you begin to understand how illegal aliens in the workforce are as common an occurrence as legally employed U.S. workers.

♦ FIRST – According to EEOC ... rules and laws, IT IS UNLAWFUL NOT TO HIRE ILLEGAL ALIENS.

[U]nder the auspices of their guiding principle of Disparate Impact (in discrimination rulings), a business cannot use any employment eligibility standard that disqualifies a federally protected category (in this example ethnicity, race, national origin) from employment.

[Emphases and link in original]

This explanation strikes me as quite plausible, being consistent with the late Lawrence Auster's summing-up on today's Western societies:

As I have often said, the highest and ruling principle of modern liberal society is non-discrimination. Under liberalism, discrimination is the worst thing there is, the ultimate evil that must be rooted out and eliminated at all costs. 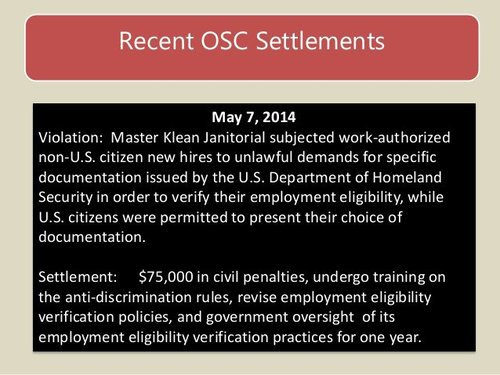 There's a lot more in sundance's article.  I'm hoping that someone with real expertise on E-Verify will weigh in on those aspects of the article. But the part about businesses being more or less required to hire illegals by government action is true. We covered it here on VDARE.com in 2003—see Indiscriminate Anti-Discrimination Enforcement: Why Is It Illegal To Check For Illegals?

My job as a business person is to maximize profits for my company, employees and shareholders. My job as the Secretary of Labor, if confirmed, is to serve U.S. citizen workers – that is my moral and constitutional duty. The public spoke loud and clear in this election, and delivered a mandate to protect American workers. It makes no economic sense to spend trillions on welfare and jobless benefits for out of work Americans while bringing in foreign workers to fill jobs in their place.

As Secretary of Labor, I will fiercely defend American workers and implement my piece of the ten point plan the President-elect laid out.

The last two points in the Trump  plan he references are the ones that concern the Secretary of Labor  as much as DHS and Justice.

9. Turn off the jobs and benefits magnet. Many immigrants come to the U.S. illegally in search of jobs, even though federal law prohibits the employment of illegal immigrants.

10. Reform legal immigration to serve the best interests of America and its workers, keeping immigration levels within historic norms.

President-elect Trump’s plan to establish new immigration controls will boost wages and ensure that open jobs are offered to American workers first. Hire American and Buy American is our policy, and the one supported by voters in both parties. I will not provide guest worker visas to companies that break the rules, and will support reforms to raise wages for Americans — I know the system from the inside, and will be the best champion American workers have had.

The first passage I've boldfaced in the Puzder statement is an astonishingly refreshing acknowledgement of reality, the very opposite of the perpetual moans over "labor shortages" that—allegedly—can only be rectified by increased immigration.

And the last bolded passage is right in line with what sundance said about Puzder's suitability for the job.  As commenter "EOD" at Boyle's article wrote:

Trump is a genius.

Bring in a guy who was for Illegal Aliens working in the USA and have him turn to your side.... all the while knowing all the players and the ins and outs of Illegal Aliens.

So maybe immigration patriots' worries about Puzder will prove to be justified, but maybe they won't.  And in the happy, latter alternative, it needn't be because Puzder experienced a conversion on the road to Damascus (which, admittedly, would be very nice!).  Instead, it could simply be changed incentives with a change of jobs.

Altogether, if Puzder presents us with a "Nixon goes to China" performance, it will be analogous to Trump himself following up on his overarching promise to "drain the swamp."  As Mark Steyn explained on July 10, 2015  ( Last Stand of the Old White Males ), Trump has ideal life-experience for the task:

The Donald is not really a conservative, nor much of a Republican. He's given more or less evenhandedly to both parties over the decades, because, at Trump's level, that's just the price of doing business in a sclerotic and corrupt republic.

Both guys know where the bodies are buried.