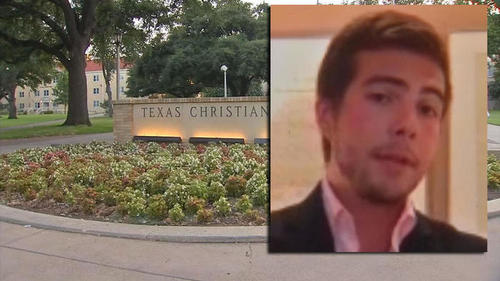 In modern post-America, all it takes to be “racist” is—be a White male. It’s a lesson Harry Vincent of Texas Christian University learned the hard way after he sent out a half dozen tweets and triggered a hysterical female acquaintance on (of course) Tumblr. And as the U.S. is no longer a free country, the childish whining of an aspiring parasite who wasn’t even a student at TCU led Vincent to be sentenced to Soviet-style “diversity training classes,” community service, and suspension from school activities.

Vincent had (perhaps unwisely) expressed his views on politics on his Twitter account and Facebook. These included Politically Incorrect sentiments such as criticizing “hoodrat criminals” in Baltimore for their reliance on welfare, stating that Islam is “not a religion of peace,” and making a joke about being reincarnated as a “beaner” [TCU Student Kicked Off Campus Over Twitter Use, by Blake Neff, Daily Caller, July 29, 2015].

That last comment was the most “offensive” thing Vincent said; impolite, but hardly worse than “gringo.” More importantly, it was not used as an insult in this context and was uttered with far less malign intent than saying something like “The White race is the cancer of human history.” Certainly, Vincent said nothing that could be construed as offensive by the standards of Twitter.

But an anonymous source did provide VDARE.com with some of “Kelsey’s” prior tweets. As is typical of an SJW, she appears to be an unstable woman possessed by a virulent and openly expressed hatred for Whites.

Unfortunately for Harry Vincent, anti-White hatred isn’t just permitted, but encouraged. Thus, with no shame, “Kelsey” took to her Tumblr page with various screenshots of Vincent’s apparently unacceptable comments. She screeched, “This [expletive] has been posting racist and disgusting comments on Twitter/Facebook…you can email TCU and tell them that he’s shedding a bad light on their university.” [Tumblr Post, 19MaybeLess]

According to the Media Research Center, there were over 2,000 reposts on Tumblr but the university only reported receiving “over 20” complaints, hardly something for even a Mom and Pop store to worry about. Nonetheless, TCU replied to the random denizens of cyberspace who made the complaints and charged Vincent with the Orwellian offenses of “Infliction of Bodily or Emotional Harm” and “Disorderly Conduct” [Notice of Allegations from TCU, Foundation for Individual Rights in Education, July 28, 2015].

Needless to say, not only was “Kelsey” obviously not “harmed” by Vincent’s tweets physically, she wasn’t harmed emotionally. In fact, like most of the perpetually offended, she seems delighted at the events that have occurred and eager to sic a digital lynch mob on her perceived enemy.

It’s also hard to argue that a brief exchange on Twitter constitutes “disorderly conduct.” By this standard, practically every student at a private college in America could be punished.

Nonetheless, Glory Z. Robinson, the TCU Associate Dean of Campus Life (a department which can be reached at campuslife@tcu.edu or at 817-257-7926), told Vincent he needed to write a letter of apology over his comments lest he receive punishment.(Google suggests that Ms. Robinson was born "Gloria Zamarripa Robinson"—Robinson being her married name—giving her a personal motive on the anti-Hispanic slur front.)

Once Robinson received the letter, Vincent was dutifully informed he had been found guilty of these nebulous charges. In a Kafkaesque twist, his guilt was partially determined because of the letter he had been ordered to provide. [Texas Christian University Suspended Student for Saying Dumb Things on Facebook, by Robby Soave, Reason, July 29, 2015].

Besides mandatory diversity training, community service, and suspension from school activities (including, significantly, Greek Life), Vincent was barred from visiting residence halls, sporting events or the university Recreation Center. To complete the Soviet treatment, he was also told to meet with a psychiatrist—presumably because anyone who doubts Islam is an inherently peaceful religion is obviously crazy [Findings and Sanctions Letter from TCU, Foundation for Individual Rights in Education, Foundation for Individual Rights in Education, July 28, 2015].

Yet this typical PC lynching is deviating from the script:

Vincent did apologize for some of his statements, arguing that as someone from the East Coast he didn’t understand “beaner” was perceived as harmful. But he is otherwise standing firm, even saying he will not return to TCU if the sanctions are not removed because

“I cannot fund an institution that does not allow me to exercise my constitutional rights. It’s just absurd. I would have such a problem paying the large sum of money that it costs to go there and then not be able to say what I want to say.”

Vincent’s father is also supporting him. He ruefully commented that the entire experience has taught him “more than he could have gained from a year in college” but “I don’t think anyone should have to have this experience the way he did and the way he was treated” [Controversial tweets ignore free speech battle at Texas Christian University, by Jeff Mosier, GovTech Social, August 3, 2015]. As Todd Starnes from Fox News put it: “It sounds to me like Harry Vincent is guilty of being a Christian Conservative white guy—and on a university campus that’s a crime worthy of [the] death penalty” [TCU student punished for criticizing Islam, Baltimore riots, August 3, 2015].

The Foundation for Individual Rights in Education has also spoken against TCU’s actions, reminding the school’s Chancellor that though the private school is not necessarily bound by the First Amendment, it does promise students freedom of speech in the Student Handbook. Furthermore, says FIRE, “TCU’s treatment of Vincent also raises serious due process concerns” [Letter from FIRE to TCU Chancellor Boschini, Foundation for Individual Rights in Education, July 28, 2015].

Hopefully, FIRE will be able to take action and force TCU to reverse its decision.

Yet the deeper injustice is why Vincent received any punishment at all when openly hateful individuals aren’t just tolerated by American universities but rewarded. A few examples:

The difference between these cases: universities pay no price for going after Whites like Harry Vincent, whereas tenured radicals can summon minority mobs to defend anyone who criticizes them.

Campus politics, like all politics, isn’t about principles but power. TCU is going after Harry Vincent because, even as a supposedly “Christian” university, it is infested with Cultural Marxists and calculates that Leftist activists on Tumblr can cause more trouble for it than conservative Americans.

Vincent told Fox News’ Todd Starnes that the only reason he got into this mess is because he reacted so strongly to “Kelsey’s” anti-American insults (she attacked the Armed Services and wrote that the U.S. deserved 9/11): “Any red-blooded American’s blood would have boiled at the sight of what she wrote… I let my anger get the best of me.”