In South Africa, bull sacrifice apparently remains highly valued, and the brutal-sounding custom was recently found by a court of law to be acceptable.

A bull-killing ritual can go ahead on Saturday after a court ruled against an animal rights group which tried to have the practice banned in South Africa.

The bull is killed during the Ukushwama ritual, an annual thanksgiving event in Kwa-Zulu Natal, in which youngsters kill the animal using their hands.

Animal Rights Africa took the Zulu king and the government to court over the manner in which the bull is killed. [...]

ARA claimed that the killing took some 40 minutes and involved dozens of men trampling on the beast as they tried to break its neck.

The organisation described the killing as "cruel and protracted". 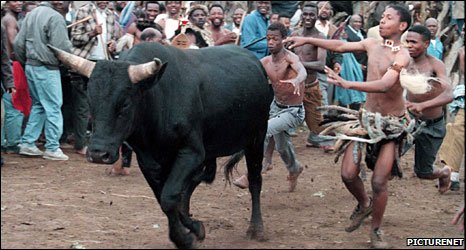 In a possibly related item, the upcoming World Cup soccer tournament to be held in South Africa may have similar rituals: World Cup to be "blessed" with slaughtered cows.

This was the week in which FIFA chief Sepp Blatter laughed at poor old Ireland, Avram Grant was likened to Yoda, Manchester City were rebranded as Manchester United, Arsene Wenger spat the dummy and South Africa proposed to slaughter a cow at every World Cup venue.

How welcoming of the South Africans to share local customs with visitors! After all, soccer is arguably the most diverse sport — it is played around the world with great passion (as shown by a recent ruckus in France: Angry Algerians Rumble in Marseille over Cairo Soccer Loss).