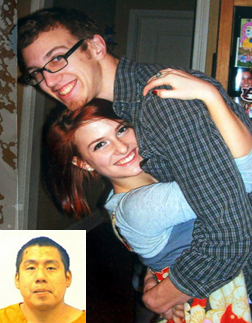 Two young people with their whole lives ahead of them, Tad Mattle and Leigh Anna Jimmerson (pictured), were killed by a previously arrested drunk-driving illegal alien, Felix Ortega (shown in the inset photo). The crash occurred April 17 in Huntsville, Alabama.

The man accused of killing two local teens in a car crash last month has been identified as an illegal immigrant and will face deportation after facing murder charges in Madison County, jail officials said Friday.

U.S. Immigrations and Customs Enforcement has placed a detainer on 25-year-old Felix Dominquez Ortega, who has been in jail since his arrest.

Ortega has been charged with two counts of murder, driving without a license, possession of a forged instrument and a seatbelt violation. Police said he was apparently drunk when he fled from officers April 17 and crashed his truck into another vehicle at Whitesburg Drive and Airport Road. He killed 16-year-old Leigh Anna Jimmerson of Grissom High School and 19-year-old Tad Mattle, a recent Grissom grad. [...]

Police spokesman Sgt. Mark Roberts said Ortega was wanted at the time of crash for an outstanding warrant for driving under the influence. Officers contacted ICE shortly after Ortega's arrest, because he provided forged identification.

Leigh Anna was a sophomore at Grissom High School and was part of the color guard. Tad was also involved in the band as a drummer until he graduated in May 2008. He pursued automotive repair in high school and planned to get a mechanical engineering degree at UAH. He was also an Eagle Scout and an accomplished vertical caver.

The victims were killed when Mattle's Supra was rear-ended by Felix Ortega's truck and the car burst into flames.