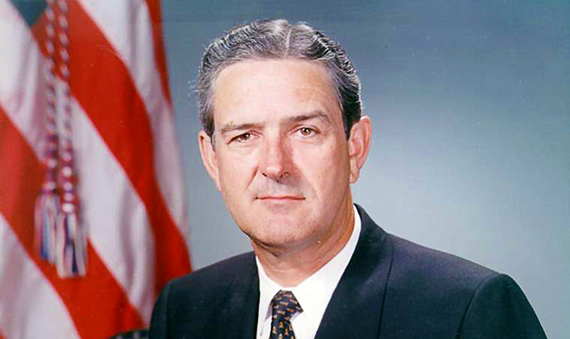 You Get What You Pay For

After Hank Paulson's turn as Treasury Secretary, the conventional wisdom became: We don't need as Treasury Secretaries anymore of these CEOs with 700 million simoleons, a fancy suit, and a firm handshake. We've had enough self-confident blowhards with endless Wall Street connections and conflicts of interest. Instead, we need a ... civil servant! That's right, a career bureaucrat, a regulator. Why didn't anybody think of this before?

So, now, we've got one. He gave his first big speech today to explain his rescue plan, to reassure and stabilize the markets, to impart confidence, to demonstrate there is a strong hand on the tiller. Unfortunately, upon getting a gander at little Timmy Geithner in action — Noah Millman said he looked like an elf giving a book report — the markets immediately fainted with the vapors.

The next iteration of the conventional wisdom will probably be that we can't have some wimpy nerd as Treasury Secretary, we need a prime specimen alpha male, a pin-striped powerhouse, a real silverback with a great head of silver hair and a million dollar smile, like ... like former Treasury Secretary John Connally!

Back in 1971, Richard Nixon developed a political crush on the conservative Democrat Connally, a former governor of Texas (who was wounded by Lee Harvey Oswald on 11/22/1963), appointing him Treasury Secretary, and picturing Connally as his heir in 1976. Connally talked Nixon into all sorts of zany adventures, like wage and price controls. When Connally ran for the GOP nomination in 1980, he raised the most money — corporate CEOs liked his look — but was obliterated by Reagan. Connally won only one delegate, Ada Mills of Arkansas, who became known as "The $11 Million Delegate."